I haven’t been in Glasgow, my home city for quite some time, but just recently I had the opportunity to spend a couple of hours of free-time before heading back to North Wales. There’s so much to see and do in Glasgow but one of my favourites is the Fossil Grove which is located within Victoria Park. When I was kid I lived just round the corner from the park and always loved going to see the fossils. They were discovered in 1887 and are the fossilised stumps of eleven extinct Lepidodendron trees. Sometimes described as “giant club mosses” but they may be more closely related to quillworts.

The site, Glasgow’s most ancient visitor attraction is viewed from within a building constructed to protect the fossils from the elements. Now here’s what most disappointed me this time. When I was a kid, the building that you see was in use, but there were no fancy screens or flashing lights. Just the fossils bathed in natural light from opaque windows in the roof. C’mon Glasgow City Council, the fossils don’t need the additional lighting, leave them as they are. Here’s a B+W one to show it without all that crazy light. 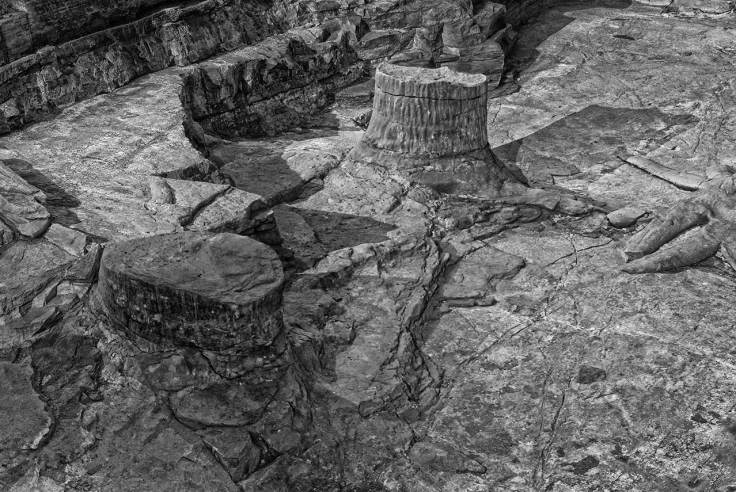 The tree stumps are the remains of an ancient forest, around 330 million years old.  Debris from  these huge forests eventually formed the coal seams that helped Glasgow grow  into a major industrial city. Fossil Grove is one of the most famous in-situ
Carboniferous forest examples in the world.

These fossilised tree stumps  were discovered when an old quarry was being landscaped as part of the  work during the creation of the park, and the fossil trees were uncovered by  removal of the surrounding rocks.  Careful excavation of the site uncovered the fossil remains, and a building was erected to protect them from the elements. Today at the Fossil Grove, you will see a small corner of a vast ancient forest, preserved in stone.