Two weeks ago I had the good fortune to meet up with Steve Ransome and Bob & Pauline England at the Conwy RSPB Reserve.  For those of you who may not know the Royal Society for the Protection of Birds speaks out for birds and wildlife, tackling the problems that threaten they’re environment.  The RSPB is the largest wildlife conservation organisation in Europe.

Walking round the well laid out paths at Conwy and using the hides give you the opportunity to photograph many of the birds that visit, so let’s get on with the photographs. First up is the Starling 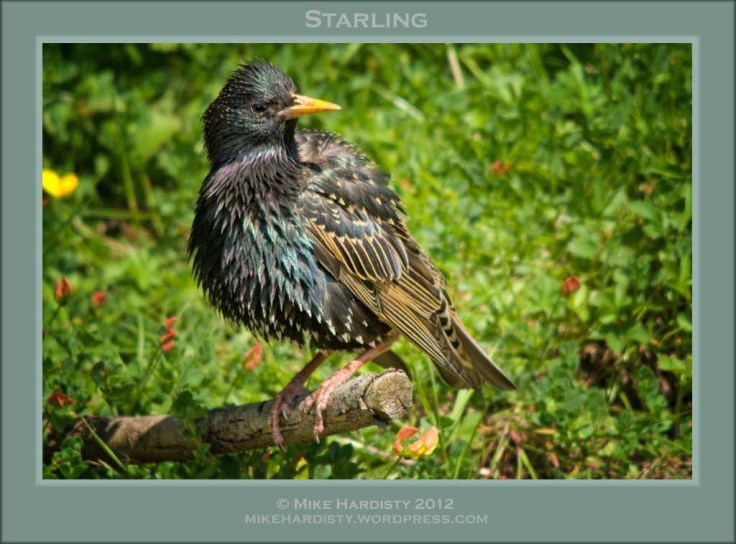 Starlings are small to medium-sized passerine birds in the family Sturnidae. The name “Sturnidae” comes from the Latin word for starling, sturnus. Many Asian species, particularly the larger ones, are called mynas, and many African species are known as glossy starlings because of their iridescent plumage. Starlings occur naturally in the Old World, from Europe, Asia and Africa, to northern Australia and the islands of the tropical Pacific.

Whilst walking around the reserve you can get some great views of Conwy Castle which is just on the other side of the estuary.

Anyway enough about castles, that’s for another time, this is supposed to be about birds. So what have we got next? Well you’ve got to show a Robin. This one flew into the hide for a quick look around and then settled down on the tree right next to us. didn’t seem to have any fear of us at all and was quite happy to sit there for a while as we “snapped away” 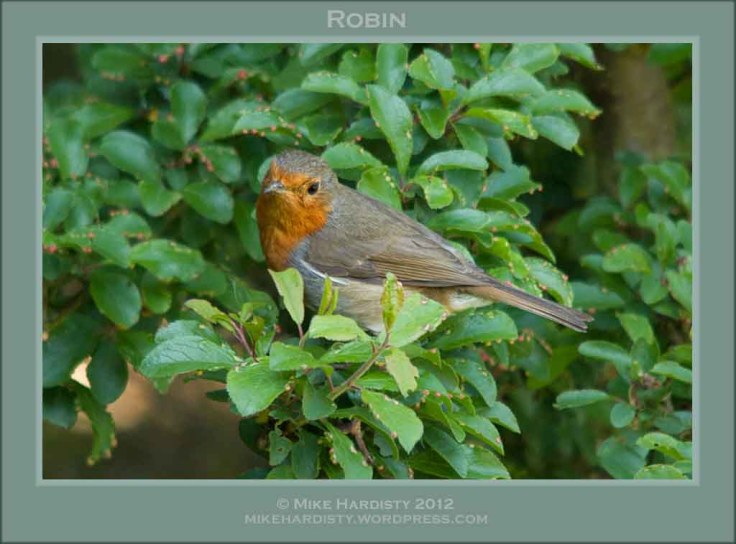 The European Robin (Erithacus rubecula), most commonly known in Anglophone Europe simply as the Robin, is a small insectivorous passerine bird that was formerly classed as a member of the thrush family (Turdidae), but is now considered to be an Old World flycatcher (Muscicapidae). Around 12.5â14.0 cm (5.0â5.5 in) in length, the male and female are similar in colouration, with an orange breast and face lined with grey, brown upper parts and a whitish belly. It is found across Europe, east to Western Siberia and south to North Africa; it is sedentary in most of its range except the far north.

As we wandered around the reserve the usual suspects started to show and next was this little blue tit.

The Blue Tit (Cyanistes caeruleus or Parus caeruleus is a small passerine bird in the tit family Paridae. The bird is easily recognisable by its blue and yellow plumage. Blue tits, usually resident and non-migratory birds, are widespread and a common resident breeder throughout temperate and subarctic Europe and western Asia in deciduous or mixed woodlands with a high proportion of oak. They usually nest in tree holes, although they easily adapt to nest boxes where necessary. The main rival for nests and search for food is the much larger Great Tit. The blue tit prefers insects and spiders for their diet. Outside the breeding season, they also eat seeds and other vegetable-based foods. Blue tits are famed for their skill, as they can cling to the outermost branches and hang upside down when looking for food.

Hang on a minute. I want something more exotic. I can photograph Robins and Blue Tits any time of the day in my back garden. Well actually I can’t. Ever since some raptor grabbed a bird in my garden late last year the only birds I get in my garden are pigeons and magpies. So where are all the migratory birds that are known to visit Conwy? Probably scared away by the lumbering great C-130 flying right over the reserve.

Continuing to walk round the reserve I spotted this crow coming in to land. Looks quite dramatic they way it’s spread it’s wings but it’s not really exotic is it.

Crows (English: /kroÊ/) form the genus Corvus in the family Corvidae. Ranging in size from the relatively small pigeon-size jackdaws (Eurasian and Daurian) to the Common Raven of the Holarctic region and Thick-billed Raven of the highlands of Ethiopia, the 40 or so members of this genus occur on all temperate continents (except South America) and several offshore and oceanic islands (except for a few, which included Hawaii, which had the Hawaiian crow that went extinct in the wild in 2002). In the United States and Canada, the word “crow” is used to refer to the American Crow, Corvus brachyrhynchos. The crow genus makes up a third of the species in the Corvidae family. Crows appear to have evolved in Asia from the corvid stock, which had evolved in Australia.

A group of crows is called a flock or, more poetically, a murder, but the term “murder of crows”  mostly reflects a time when groupings of many animals had colorful and poetic names. For example, other group names include: an ostentation of peacocks, a parliament of owls, a knot of frogs, and a skulk of foxes.

Recent research has found some crow species capable not only of tool use but of tool construction as well. Crows are now considered to be among the world’s most intelligent animals. The Jackdaw and the European Magpie have been found to have a nidopallium approximately the same relative size as the functionally equivalent neocortex in chimpanzees and humans, and significantly larger than is found in the gibbon. See, you learn something new every day.

Half way around the reserve now and nothing exotic yet. But we did see a some Welsh Ponies having fun.

The Welsh Pony originated in Wales in the United Kingdom. Welsh ponies are known for their good temperament, hardiness, and free-moving gaits. Native ponies existed in Wales prior to 1600 BC, and a Welsh-type cob was known as early as the Middle Ages. Interest in the breed declined during the Great Depression, but revived in the 1950s.Throughout their history, the Welsh breeds have had many uses, including as a cavalry horse, a pit pony, and as a working animal on farms.

By now Bob needed to sit down, ease his legs and take a rest……

……and Pauline decided to take one too.

And still no exotic birds! But wait. What’s that there? Oh! It’s just a Pied Wagtail

The White Wagtail (Motacilla alba) is a small passerine bird in the wagtail family Motacillidae, which also includes the pipits and longclaws. This species breeds in much of Europe and Asia and parts of north Africa. It is resident in the mildest parts of its range, but otherwise migrates to Africa. It has a toehold in Alaska as a scarce breeder. In some areas, notably Britain and Ireland, the sub-species Pied Wagtail (M. a. yarrellii) predominates. This is an insectivorous bird of open country, often near habitation and water. It prefers bare areas for feeding, where it can see and pursue its prey. In urban areas it has adapted to foraging on paved areas such as car parks. It nests in crevices in stone walls and similar natural and man-made structures.

As we continued around the reserve we had a great time chatting about photography, cameras, settings etc. Then out of the corner of my eye I spotted it. A rare and exotic bird. The Minor Maculosos Stephanus Redemptionem is a member of the MyFinePix family. It is assigned to the genus Pretium. From its habit of spending most of its time near trees in woods and parks, this little pretium is often overlooked, but if sighted on a trunk it may at once be identified by the long protrusion from the head area and the constant call it makes which sounds just like a camera shutter.The male can be easily recognised by the snow-white head. 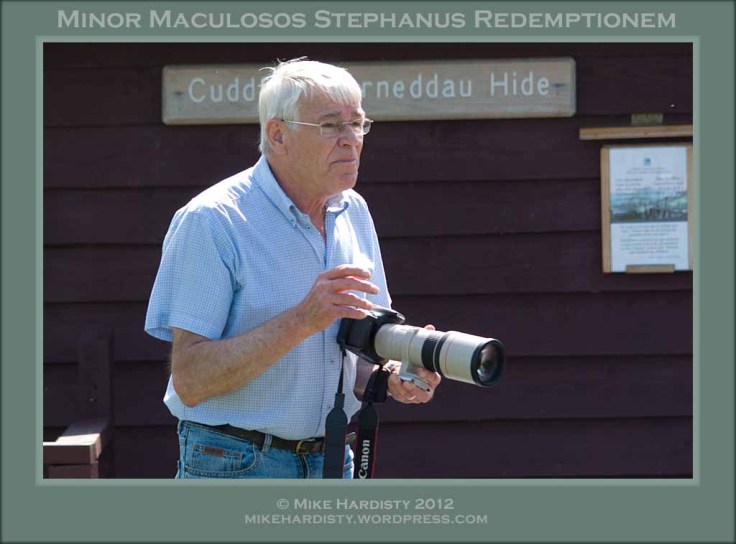 All right, all right, not exactly exotic but there is only one Steve Ransome, although from the various sightings around the country you would think there are loads of them. Tee Hee. You didn’t think I would let that Finger Photograph go, did you, Steve?

Right, enough of the tomfoolery. Next up is a Whitethroat. Both Steve and I managed to capture this great little bird sitting on a thorn-bush.

The Common Whitethroat, Sylvia communis, is a common and widespread typical warbler which breeds throughout Europe and across much of temperate western Asia. This small passerine bird is strongly migratory, and winters in tropical Africa, Arabia and Pakistan. This is one of several Sylvia species that has distinct male and female plumages. Both sexes are mainly brown above and buff below, with chestnut fringes to the secondary remiges. The adult male has a grey head and a white throat. The female lacks the grey head, and the throat is duller. The Whitethroat’s song is fast and scratchy, with a scolding tone.

We were getting near the end of our walk around the reserve and I stopped off at the last hide to capture this lapwing wading on the edge of the shore.

Vanellinae are any of various crested plovers, family Charadriidae, noted for its slow, irregular wingbeat in flight and a shrill, wailing cry. Its length is 10-16 inches. They are a subfamily of medium-sized wading birds which also includes the plovers and dotterels. The Vanellinae are collectively called lapwings but also contain the ancient Red-kneed Dotterel. A lapwing can be thought of as a larger plover. In Europe, “lapwing” often refers specifically to the Northern Lapwing, the only member of this group to occur in most of the continent.

I hoped you enjoyed this little walk around Conwy with me, Bob, Pauline and Steve. You can read Steve’s take on this great day out by following this link and for Bob’s view of visit to Conwy follow this link