This years Air Show, two days of great air displays,  took place on the August Bank holiday which has just gone. Main attraction for me this year would be the Vulcan Bomber on one of it’s last flying days before it’s grounded for good.

Just click on any photograph to see a larger version

First up the Hawk T2; a British single-engine, jet-powered advanced trainer aircraft, used not only for training but also by the Red Arrows. 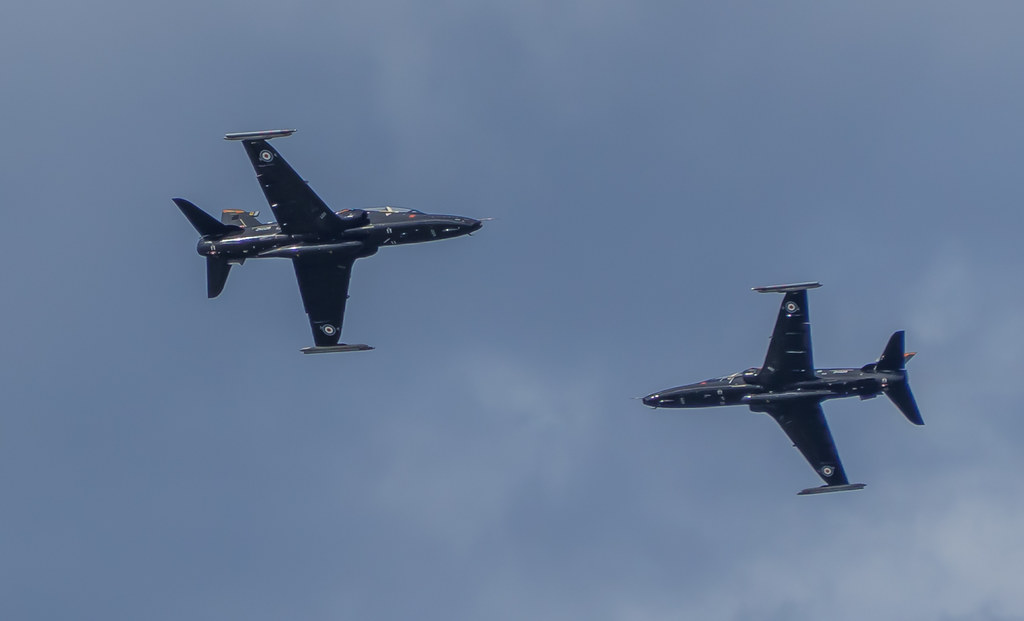 Mainly based at RAF Valley on the island of Anglesey the Hawk is often seen flying through the valleys in Snowdonia. Don’t half give you a fright sometimes when they come screaming right over the top of your head when you’re not expecting it.

From fast jests to something more sedate. A pair of old pre WW2 biplanes also used for flying training. 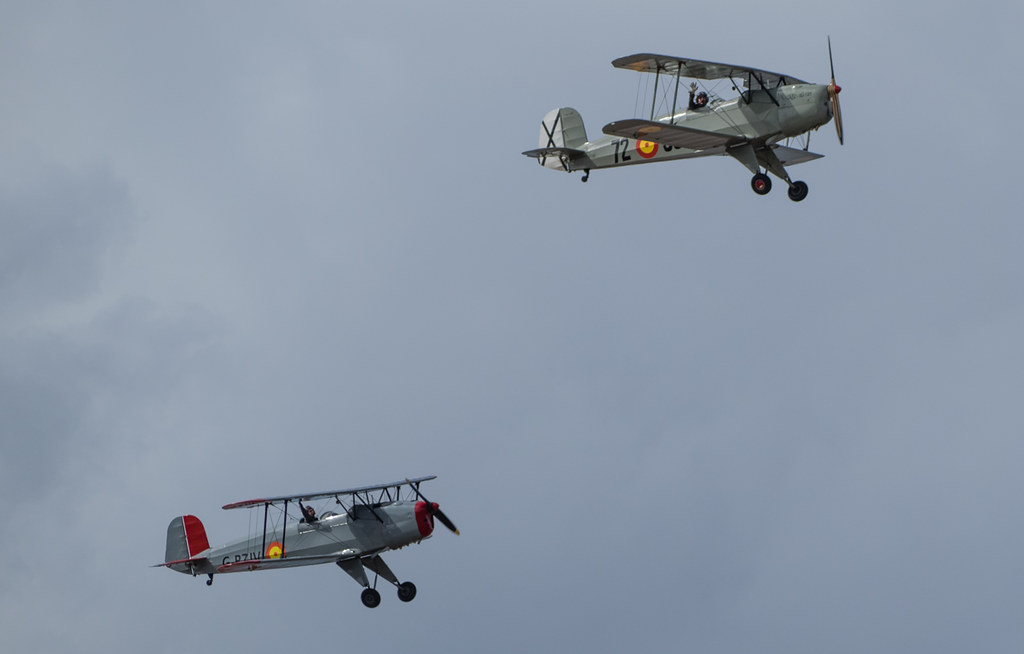 And now for something completely different. Supplied as a complete ready-to-fly-aircraft the Calidus is an Autogyro designed and produced by AutoGyro GmbH of Hildesheim, Germany. 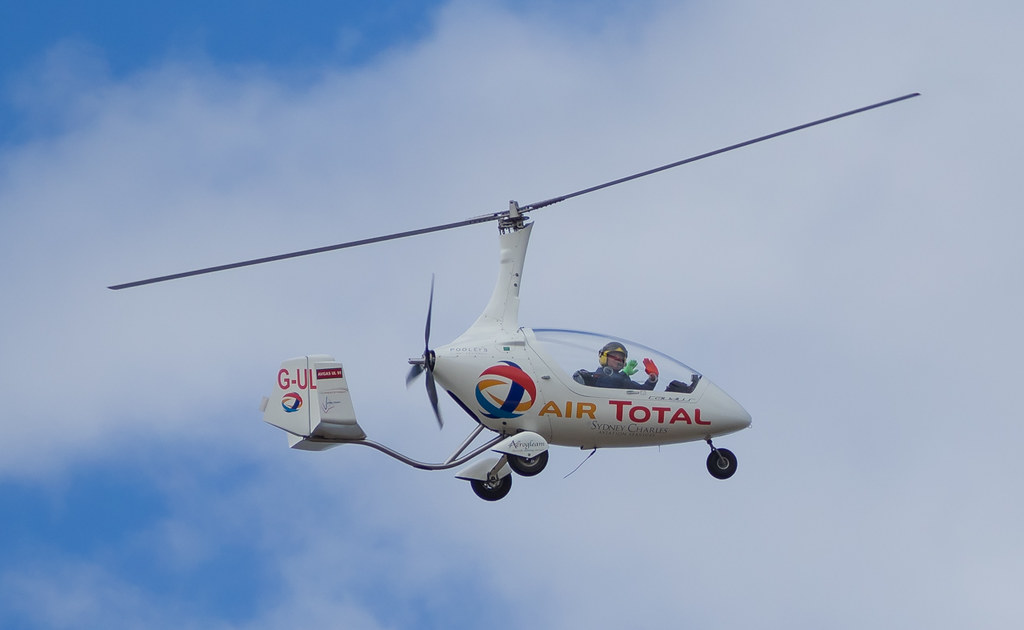 Now for some more WW2 aircraft who all put in an appearance at the air show.  The Douglas C-47 Skytrain or Dakota (RAF designation) is a military transport aircraft developed from the civilian Douglas DC-3 airliner. It was used extensively by the Allies during World War 2. 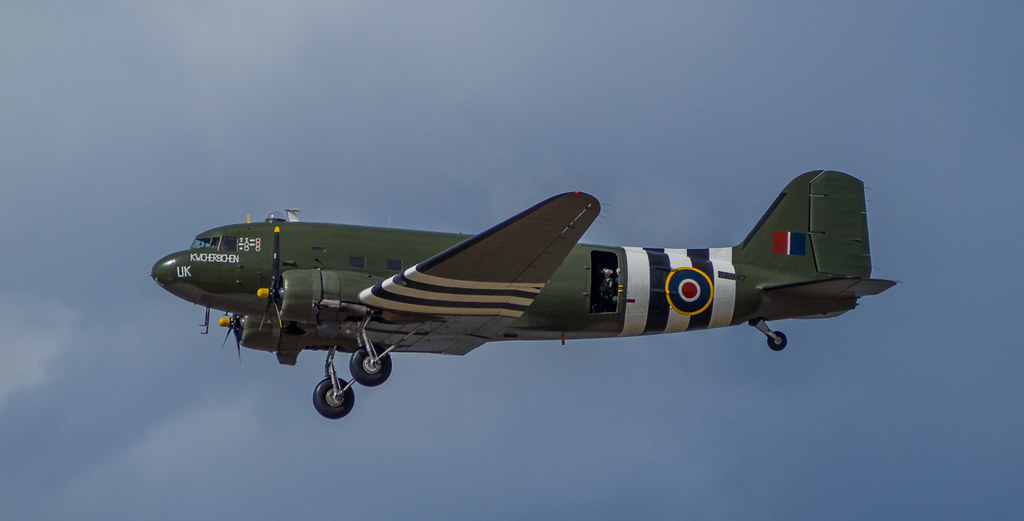 The Fairey Swordfish was a biplane torpedo bomber designed by the Fairey Aviation Company and used by the Fleet Air Arm of the Royal Navy during World War 2. Built in the 1930’s and despite having an out-dated bi-plane design it remained in service throughout the war in Europe  Designed as a naval attack aircraft, the Swordfish was later used as an anti-submarine and training craft. 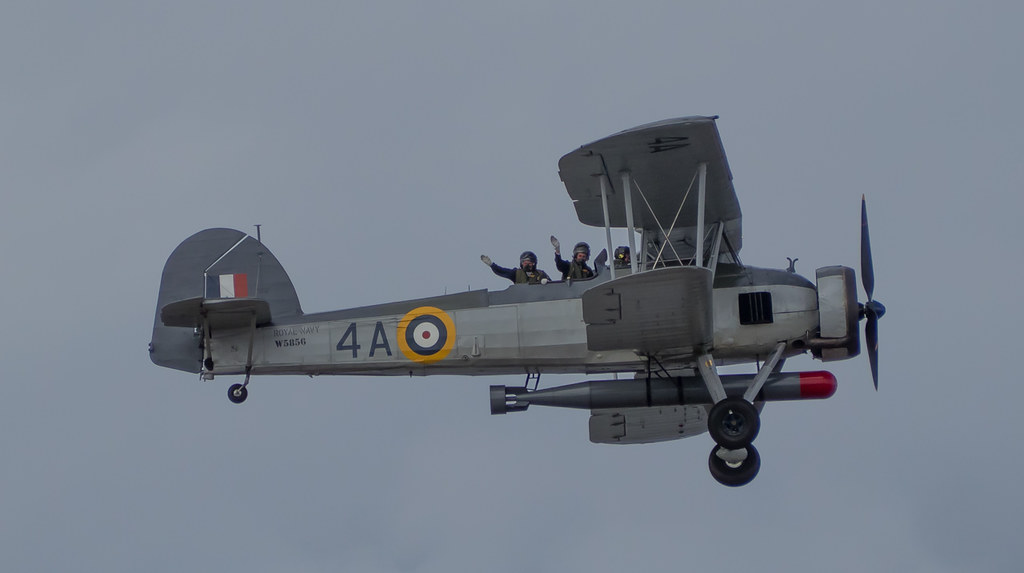 There’s nothing like the sound of a Rolls Royce Merlin engine; combine it with the airframe of the Spitfire and I’m in heaven. It’s a beautiful aircraft, one I love to see and hear flying. 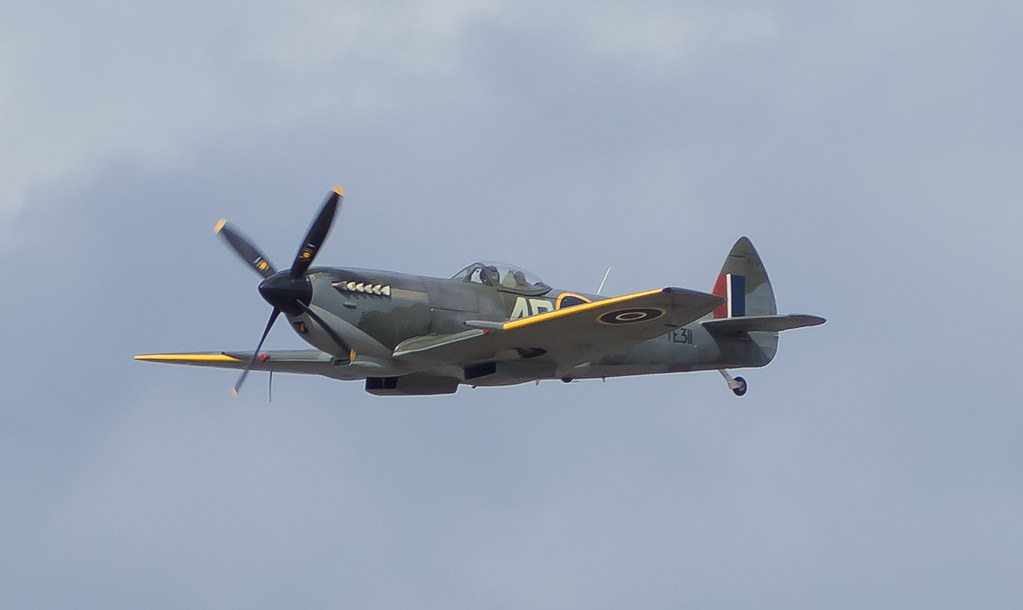 Right! Let’s shake it up a bit….literally. Our next performers at the air show provide spectacular displays of aerobatic flying. They really use the sky to perform some great stunts.

Flying two Pitts Special S-1D Biplanes,  the TRIG aerobatic team are sponsored by Trig Avionics. Regarded as one of the legendary light aerobatic aircraft it was designed by Curtiss Pitts in 1944. The design was so successful, famous teams like Rothmans and Marlboro adopted the Pitts are their display aircraft in the 1970’s. 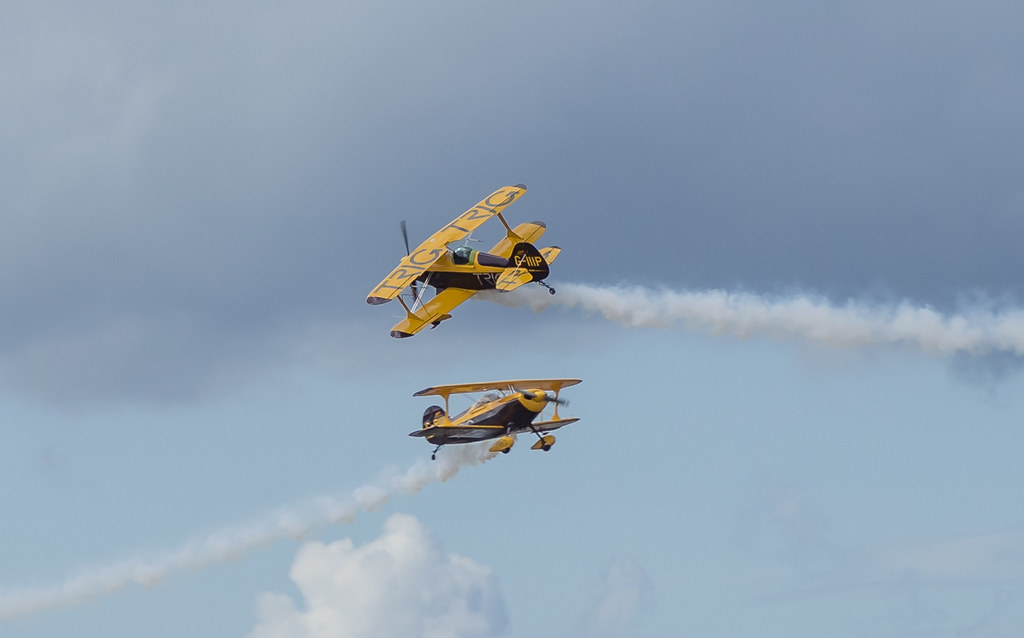 Another Pitts Special, this time in a red and white livery. 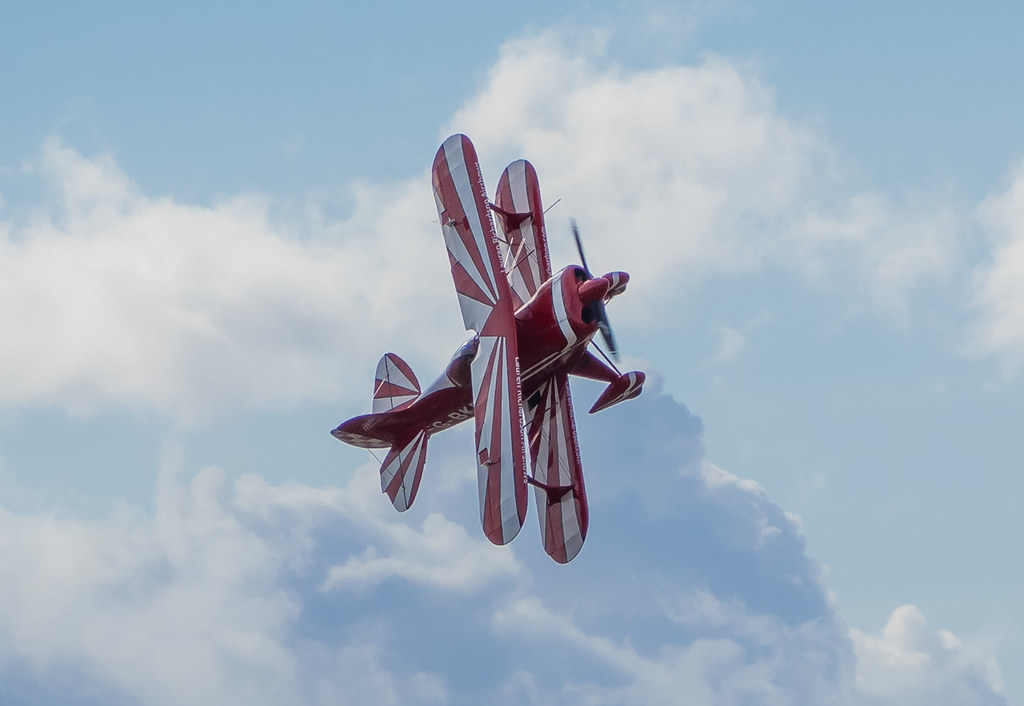 The Extra 260 was designed and built in Germany by Walter Extra, an aerobatic pilot.

My final aircraft and star of day 1 of the show is the Avro Vulcan (officially Hawker Siddeley Vulcan a jet-powered delta wing strategic bomber, which was operated by the Royal Air Force (RAF) from 1956 until 1984. After retirement by the RAFXH558, named “The Spirit of Great Britain” was restored for use in display flights and air shows. 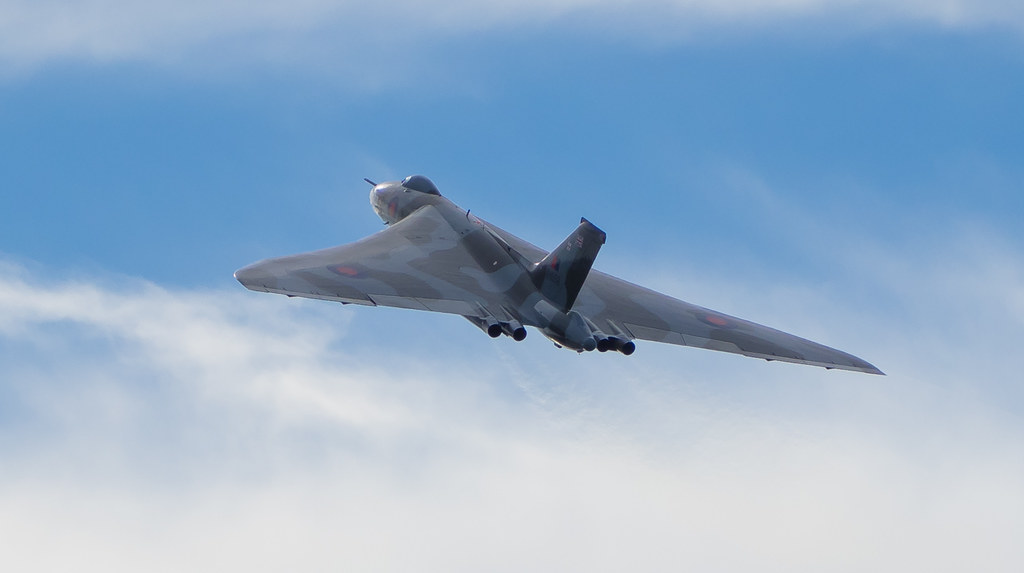 But sadly, this year 2015, is the last year of flying. There are several reasons for this. The airframe and systems are 10% above the hours flown by any other Vulcan. More importantly the expertise required to maintain the excellent safety record is becoming increasingly difficult to find.

That’s it! I hop you enjoyed the photographs.