Each year I look forward to the snow falling in the National Park. For me as a photographer it adds something new to the ever-changing landscape and makes me want to get out there and photograph it. Of course it’s not as simple as that. Falling snow is not good for the animals that live in the park, nor do the farmers welcome it, especially if we have blizzard conditions.  However at the lower levels it’s still not too bad. so with my photography buddy Adrian Evans, I set off to the Ogwen Valley with the hope of catching some snow. The Ogwen Valley and surrounding area is probably my favourite spot in the National Park for two reasons. It has waterfalls, mountains, rivers, some nice wooden bridges, stone ones as well, lots of sheep, sometimes wild ponies – only when the snow is heavy and best of all it’s easily accessible with a main road running right through the valley. But first of all I’m going to start off in Nant Ffrancon. 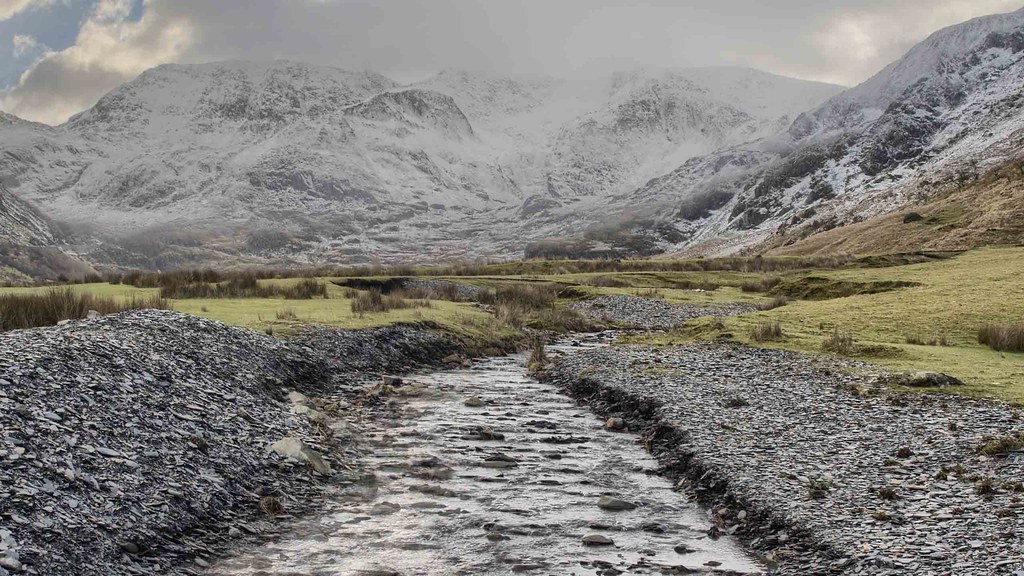 Nant Ffrancon is a steep-sided glacial valley dropping to Bethesda between the Glyderau and the Carneddau Mountain Ranges. To the left of the photograph above is the start of the Ogwen Valley. There are two roads through the valley, the main trunk road (A5) and the old road built by Lord Penryhn of Penrhyn Castle near Bangor around about 1790 – 1792. This is the old road, it’s my favourite way of getting up to the Ogwen Valley because there are some good photo opportunities on the way and usually you never see anyone except farmers and the park rangers. 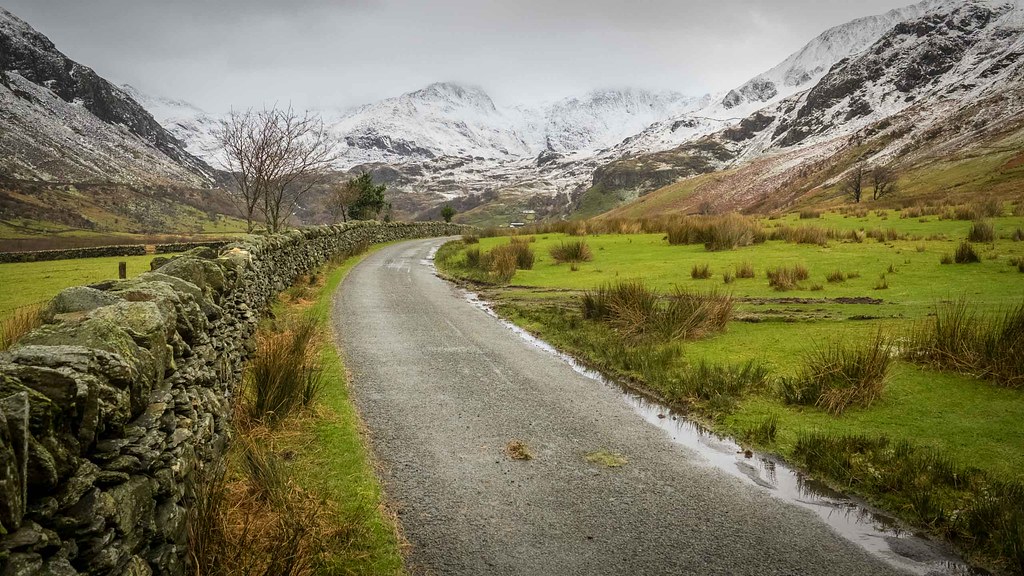 Lord Penrhyn’s road was built to allow the easy of movement of slate from his quarries to the shipping point at Port Penrhyn. Nowadays it has a standard road surface and throughout the year it’s usually quite passable. But as you can see from this photograph below, taken in early 2015, it can sometimes become a bit treacherous. Even with 4-wheel drive I couldn’t get past this point. It was just sheer ice with no grip at all.

Still in Nant Ffrancon you can find little waterfalls like this all the way along the valley. Of course at the moment there’s not a lot of water coming down the hillside but you can see from this photograph that the torrent here could be a lot stronger. 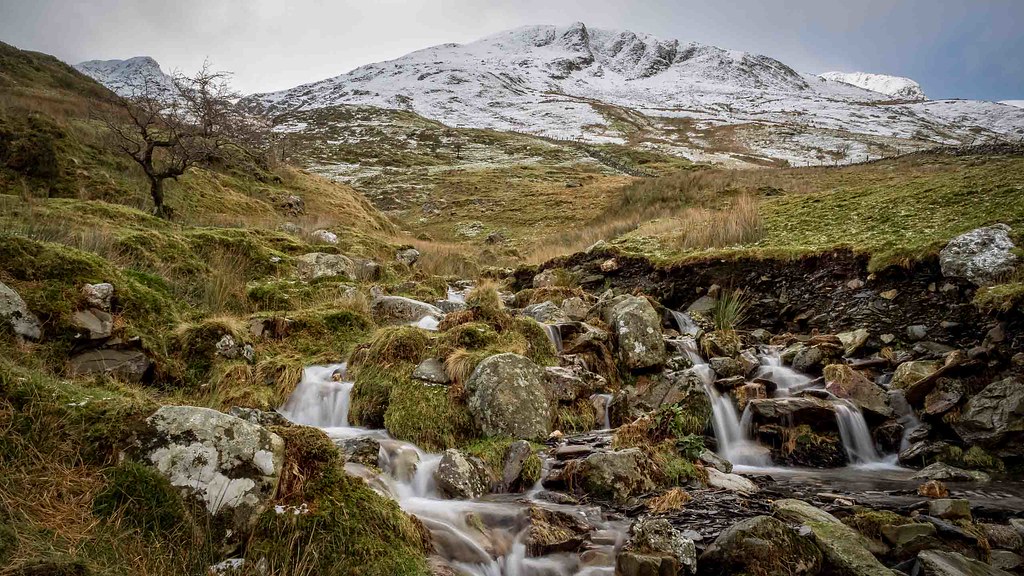 Almost at the top of the old road as it enters the Ogwen Valley you can see Pen yr Ole Wen. Wikipedia describes the mountain as the seventh highest in Wales at a height of 978 m (3,209 ft) equal to England’s highest mountain Scafell Pike. You can also see the modern road, the A5, and some Welsh ponies which have freely roamed these mountains for centuries. 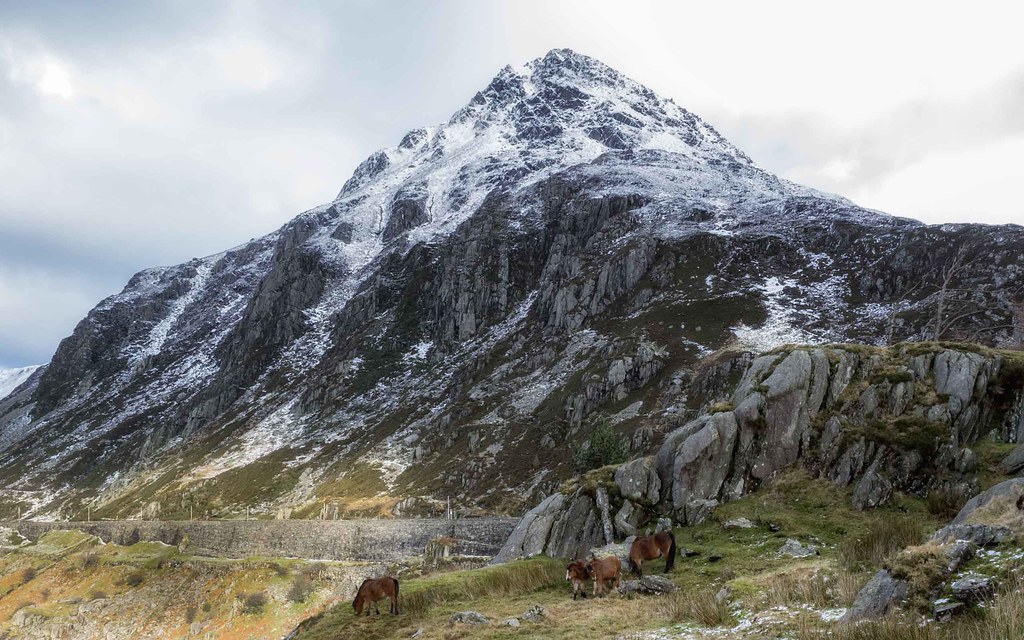 From this spot a short walk takes me to the path to the Glyderau and Cwm Idwal, a spot I have visited often before. It’s a nice gentle walk to Cwm Idwal and probably one of the easier ones in the Snowdonia National Park. But even still you have to dress for the conditions or else you put yourself in danger and possibly others as well, who have to come and get you out of trouble. 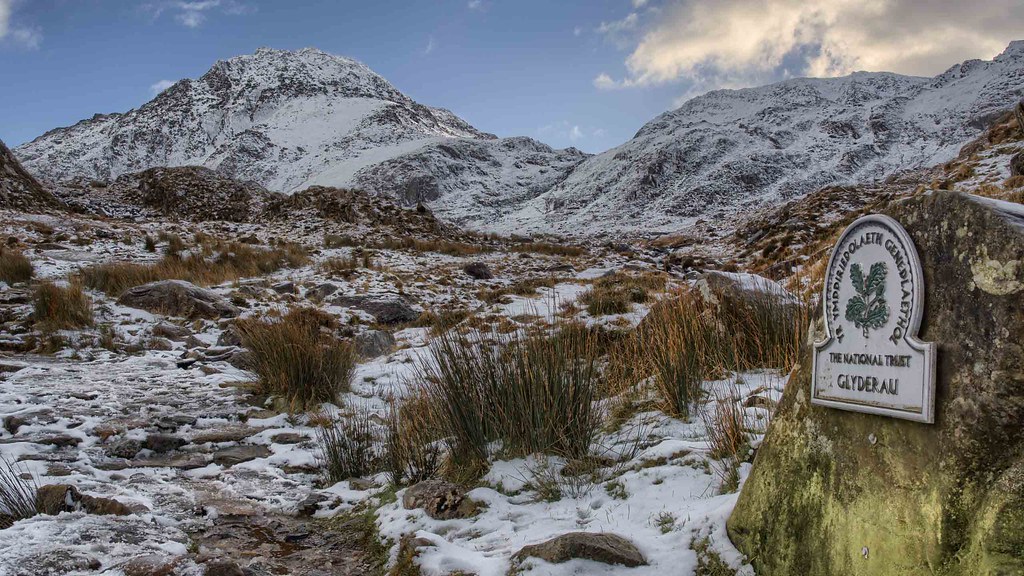 Would you believe, whilst I was waiting to take the photograph above I saw two idiots, and I will say idiots, walking up the path wearing cotton track suit bottoms and tops, along with trainers with no socks on? Just after that another couple, he was wearing light shoes, she had fashion boots with a heel. Most people using the track were wearing proper outdoor walking gear with boots. Bearing in mind that the further up you go, the more snow you get and the colder it becomes. And it was cold.

Anyway. We decided to leave the Ogwen Valley and head for Capel Curig and the Llanberis Pass, on the way stopping off to photograph Snowdon from a distance. By now the weather was changing with some light sleet starting to fall. With the light rapidly disappearing it was time to head home. So I leave you with this view of Mount Snowdon, the highest mountain in Wales at 1,085 metres (3,560 ft) above sea level, and the highest point in the British Isles outside the Scottish Highlands. 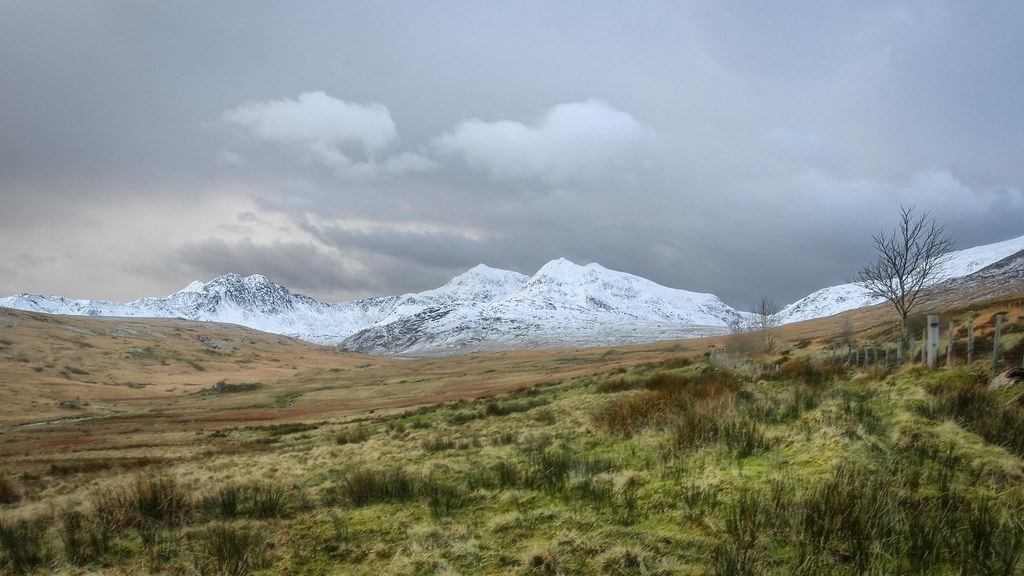 That’s it from me. I’ll be back soon with this weeks WordPress challenge and of course my 52 challenge for next week. Meanwhile here’s what other great WordPress Bloggers are saying about Snowdonia;

6 thoughts on “A Touch Of Snow In The Ogwen Valley”