I’m back. Just had a great week in the county of Northumberland which borders the England/Scotland border. Now us Scots, being a warlike nation in past times, always had an eye for this part of the country, and so as evidence of its violent history, Northumberland has more castles than any other county in England. At the far north of the county the predominant accent seems to be more Scottish than English. So as you can guess I felt quite at home, especially as the shops sell rare Scottish delicacies like Haggis, Tattie Scones, Scotch Pies, and SnowBalls. Heaven, shear Heaven

However, that aside I was there to try and capture some of the great scenery that can be found in Northumberland. One of the places I really wanted to visit was island of Lindisfarne, which lies just off the coast, near Berwick-upon-Tweed, our base for this trip. The island has a very small population of about 160 persons, but tourism increases the number of people to be found on the island quite dramatically to the tune of roughly 650,000 visitors every year. That’s a lot of tourists

Lindisfarne is very rarely referred to by its Anglo-Saxon name by locals. In 793AD the Vikings carried out a murderous and bloodthirsty attack on the monastery. Later monks from Durham  made an observation; “Lindisfarne – baptised in the blood of so many good men – truly a ‘Holy Island”. Nowadays the more appropriate title is ‘The Holy Island of Lindisfarne’.

And so to a photograph. 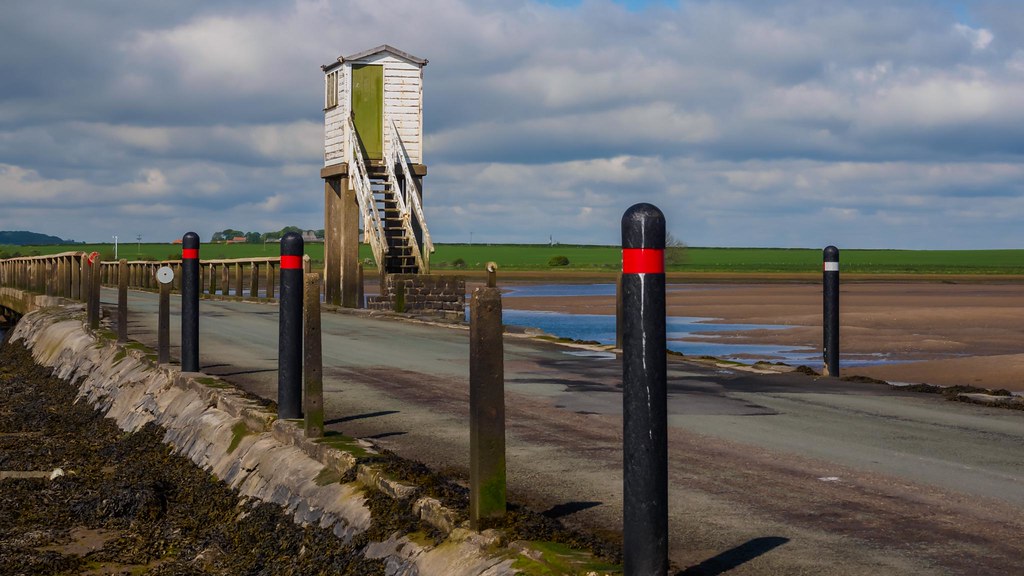 Linking the island with the mainland is a causeway that is about two miles long. At low tides you can safely cross to Lindisfarne but at high tides the road is under water. Should you happen to misjudge the tide there is a refuge hut you can shelter in. Whilst I was on the island I was talking to a local. he told me that the tide can rise 2 inches (5 centimetres) every 4 minutes and that the tide has been known to reach the top of the stairs, level with the floor of the hut. I haven’t been able to verify this but I’ve no reason to believe he would tell me anything other than the truth but here’s a short video to show you what it’s like. Look at the way that water is moving. If you want to skip the pre-amble then have a look at 2:10 and 2:42. The video was shot from the mainland side, the causeway road runs along the side of the island to the right of the scene until it reaches higher ground.

Over the weekend I will write a post with more photographs from the island.

6 thoughts on “Lindisfarne – A Holy Island”