Saturday saw me in Liverpool for the Fujiholics Liverpool Photowalk. But with my Olympus E-M1 still in for repair I was using a 6-year-old Point and Shoot camera. Not the greatest camera in the world, with a poor battery life, but hey it takes photographs and being small is pretty discrete. But I’ve never really worked seriously with this little camera so it’s going to be interesting to see if I can get some half decent results from it. One thing though, there I am on Saturday morning, no camera bag, no heavy camera, with the advantage of total freedom. Now all I need are some good results.

Today I’m going to be using Black and White for my photographs and I’m starting with the reflection of one of the towers of the iconic Liver Building in the window of a restaurant. 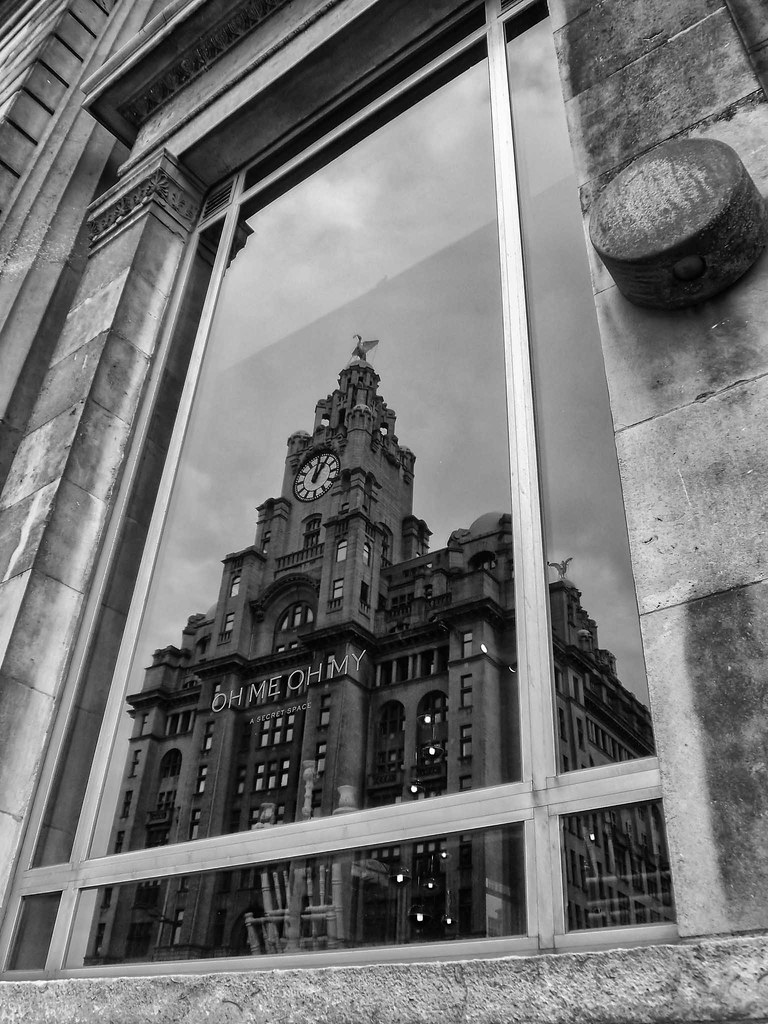 Good start, but I’m noticing there’s quite a lot of noise with this little camera, especially in the darker areas but you have to work with what you’ve got. 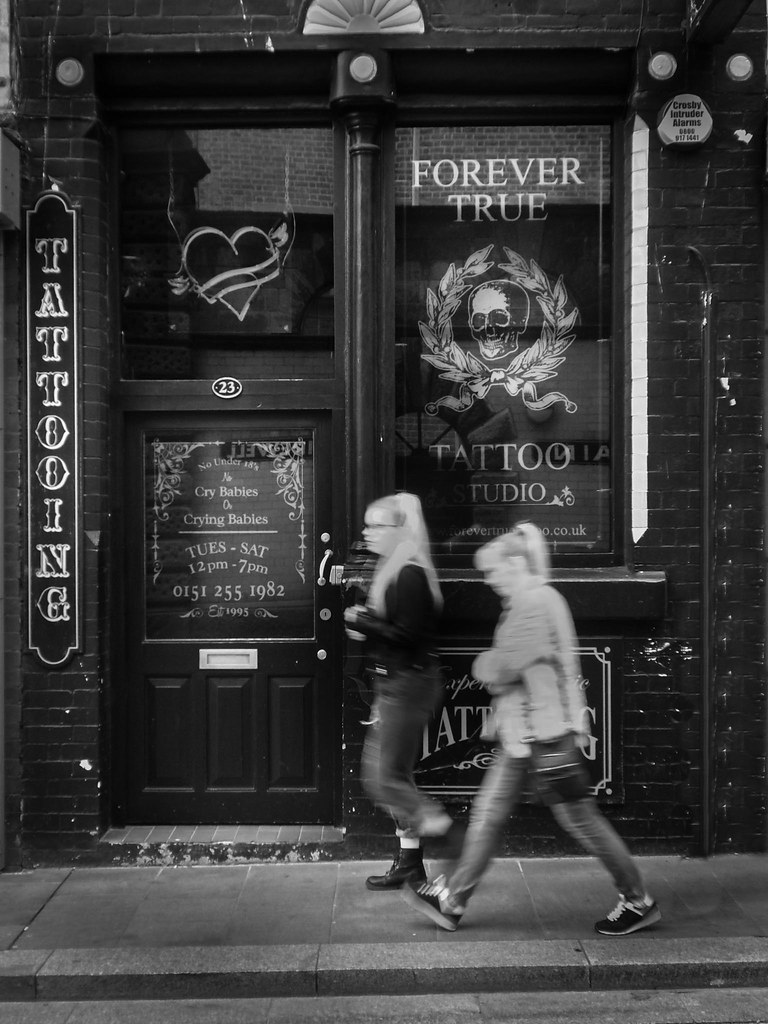 What a strange photograph! The shop is in perfect focus. The two ladies are blurred, fair enough, but it almost looks like they are partially see through. I’m not knocking it in any way and if I tried to get something like this with the Olympus, I probably never could, unless I used a tripod and slowed the shutter speed right down which incidentally was 1/30 sec @f3.7

As we slowly make our way around a pre-planned route it’s inevitable that the large group we started with will break up into smaller groups as people stop to take photographs. That’s fine follow the map and you can soon catch up with everyone. But on these photowalks the route can be anywhere between 3 and 5 Km so come prepared

A photographer may not just walk the streets but he/she does a lot of walking, with a purpose, so the most important piece of equipment after the camera is a good pair of shoes. A writer can do a lot of work from a hotel room but a photographer has to be there, so he/she is in for a hell of a lot hiking. – David Hurn 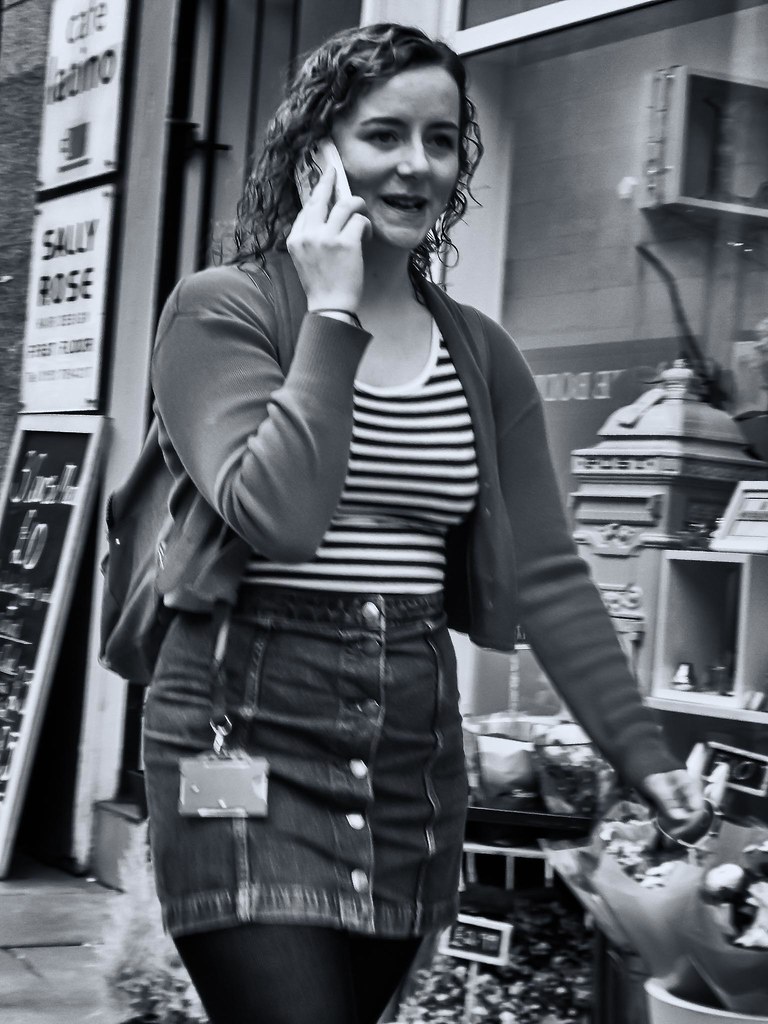 Telephones! Nowadays everyone is one the phone. You can get very close and they probably won’t notice you, especially with a little camera. But one of the things I have noticed, these are very flat, smooth. Probably because they are out of focus. Maybe I’m just too close to people. 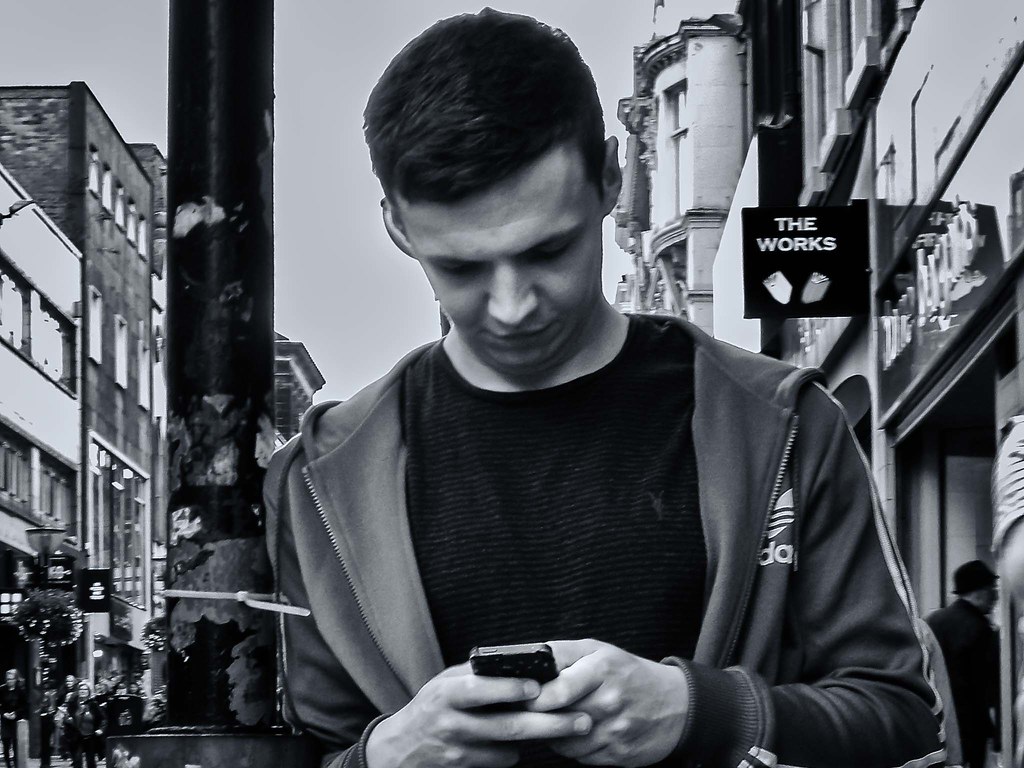 Now this wasn’t intentional, because at the time I didn’t know I was getting poor results, but in the photograph below, it’s much more in focus and that’s because I was standing further away 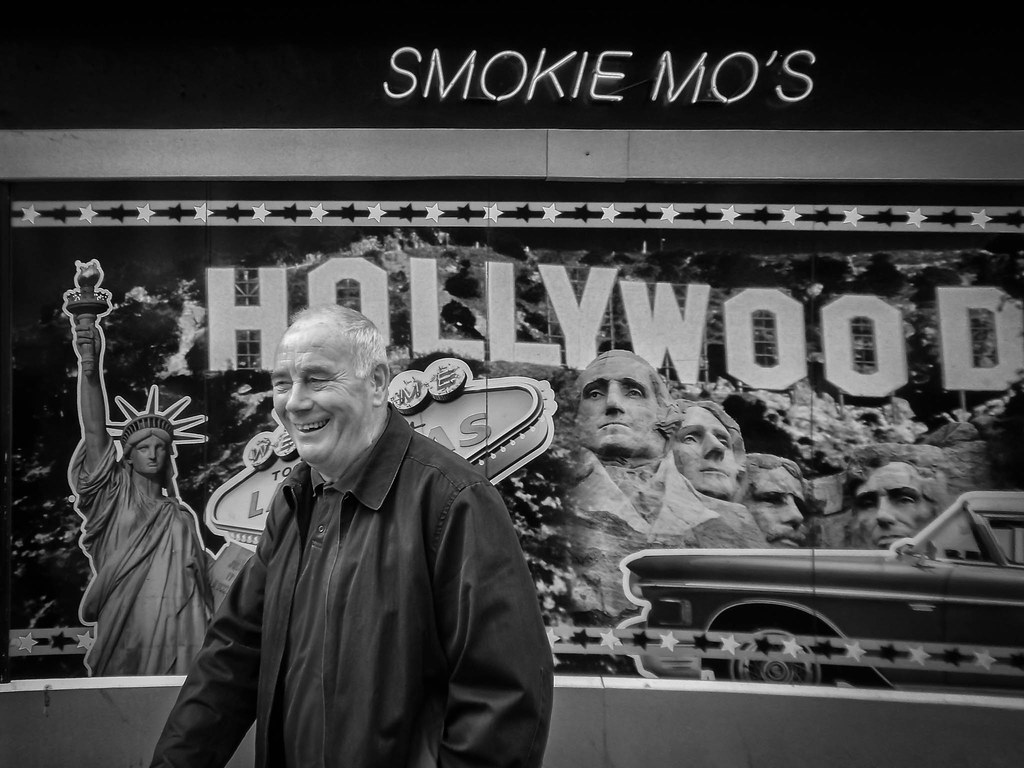 I like the one above. He started laughing and joking with me. He knew I was taking photographs but was quite happy for me to go ahead. Now this next one is the same. it looked so interesting and working on the principle of “if you don’t ask you don’t get” I went into the barbers and asked if it was ok. They were totally happy  to let me take some photographs and just carried on as though I wasn’t there, except of course they guy in the background who sort of started posing. 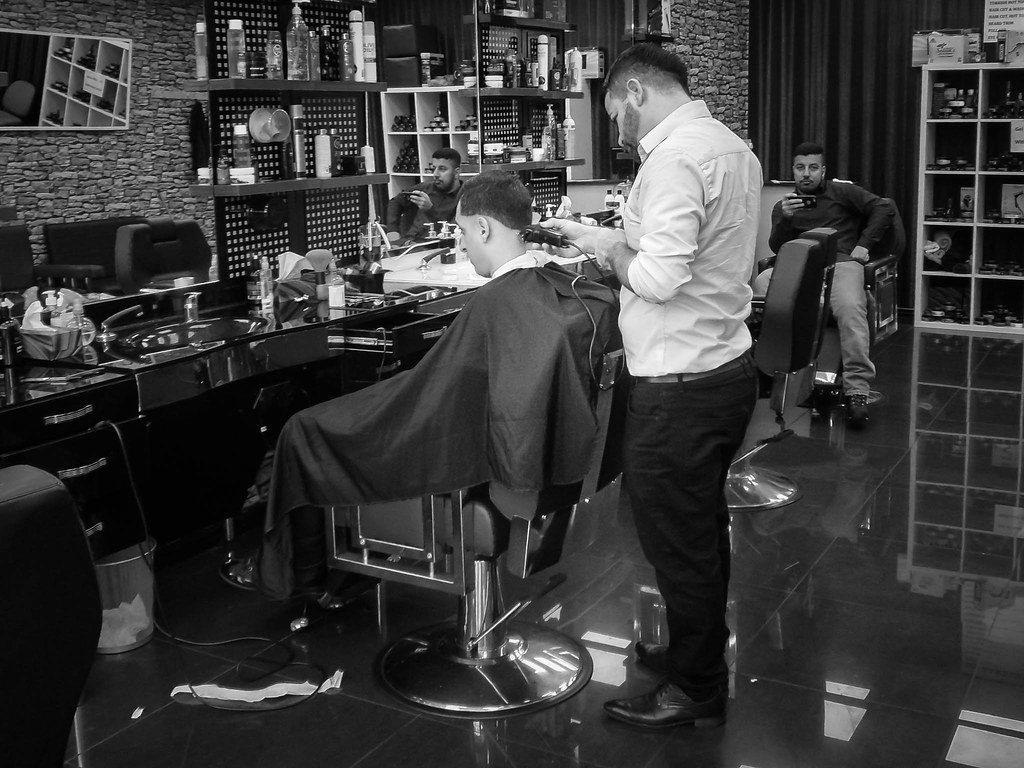 There’s a lot of regeneration going on in Liverpool with old buildings being knocked down to make way for the new.

Finally I’d like to leave you with my only colour photograph of the day. . The bride knew we were coming and so a lot of photographers gathered to capture her and her husband when the emerged from Saint George’s hall. After the Pro Tog had done the official photographers we were allowed to take some as well. 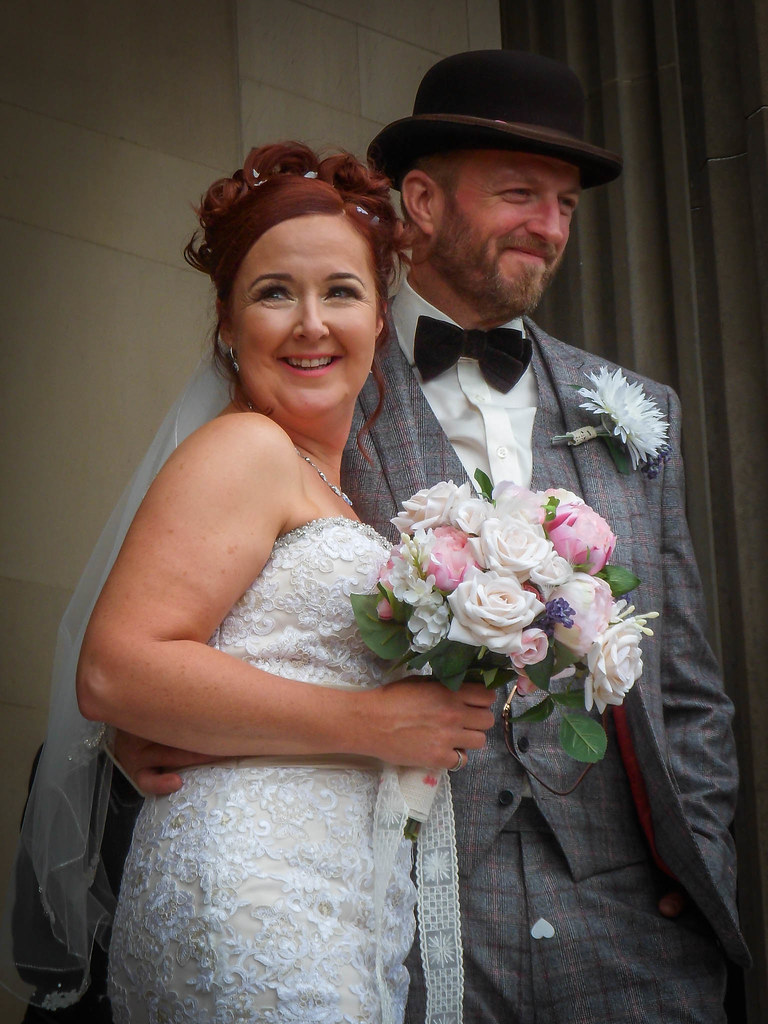 Congratulations to the newly married couple. That’s it from me