I’m in France, well to be more accurate, I was. I’m home now but I did take a lot of photographs whilst I was away.

Arles is situated on the River Rhone at the point where the river starts to become a vast natural delta. As such it was an obvious site for a Roman city. Founded in the 2nd Century BC, Arles became the effective capital of Gaul, until it’s fall to the invading barbarians in 471 AD.

In modern times Arles is associated with the tragic life of Vincent van Gogh and therein lies a problem. Most of the photographs have people in them, because so many tourists want to visit this classic Provence destination.

So let’s get on with the photographs. If you want to see any of them larger just click on the photograph. By the wonders of modern technology you’ll immediately be whisked to my Flickr profile to see the larger version. I am considering a theme change to get larger photographs shown.

I suppose it’s only fitting to start with a photograph of an artist painting down by the river. But here’s the thing, he wasn’t painting a scene of the river. No, he was knocking up a quick painting of a typical Provence house with lavender and a few trees outside it. Dress to impress and hope you can sell to the passing tourist trade. 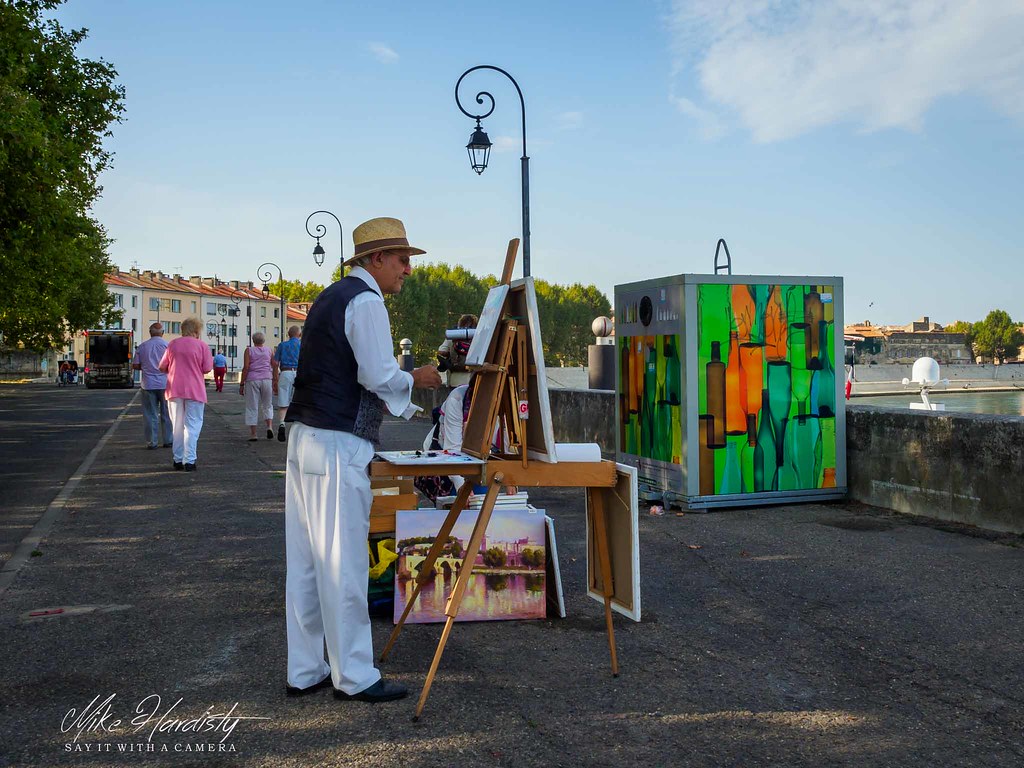 Arles has lots of narrow streets, which is great. For one it keeps you in shade, temperatures were starting to rise to about 28oC (82oF), not too hot, but little did we know that it was going to get a lot hotter during the week. Secondly you get to photograph lots of light and shade. 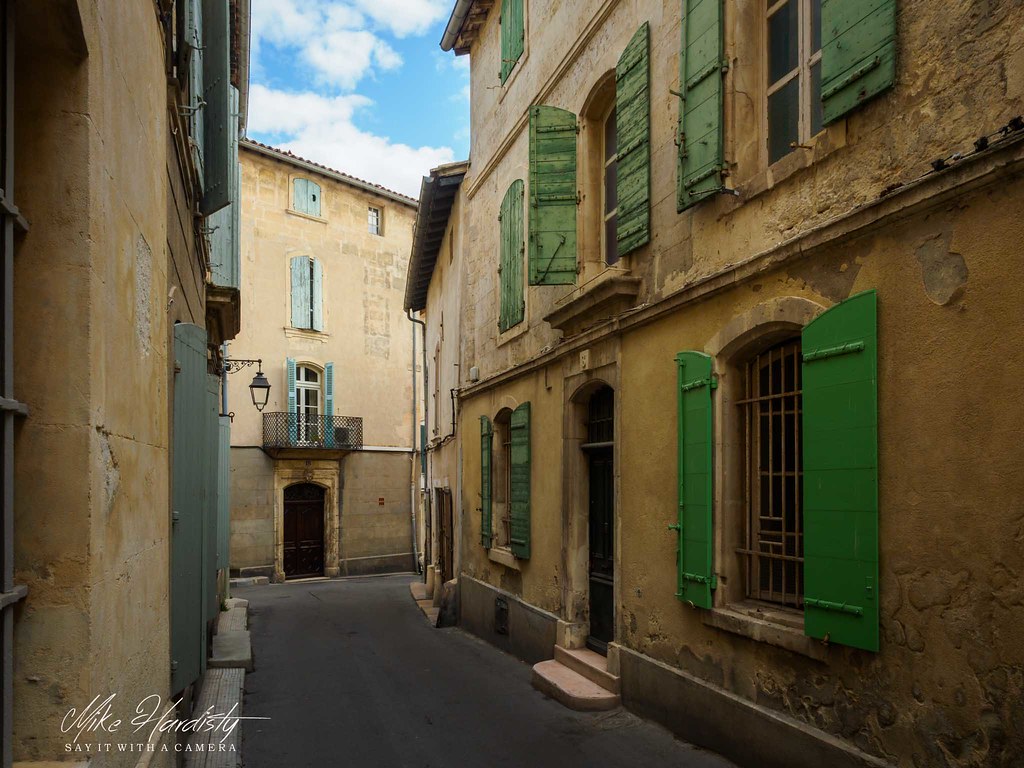 It’s Sunday morning and the town is quiet as we wander around. I’ve had a good breakfast but I’m starting to get tempted by all those pastries that are on display. 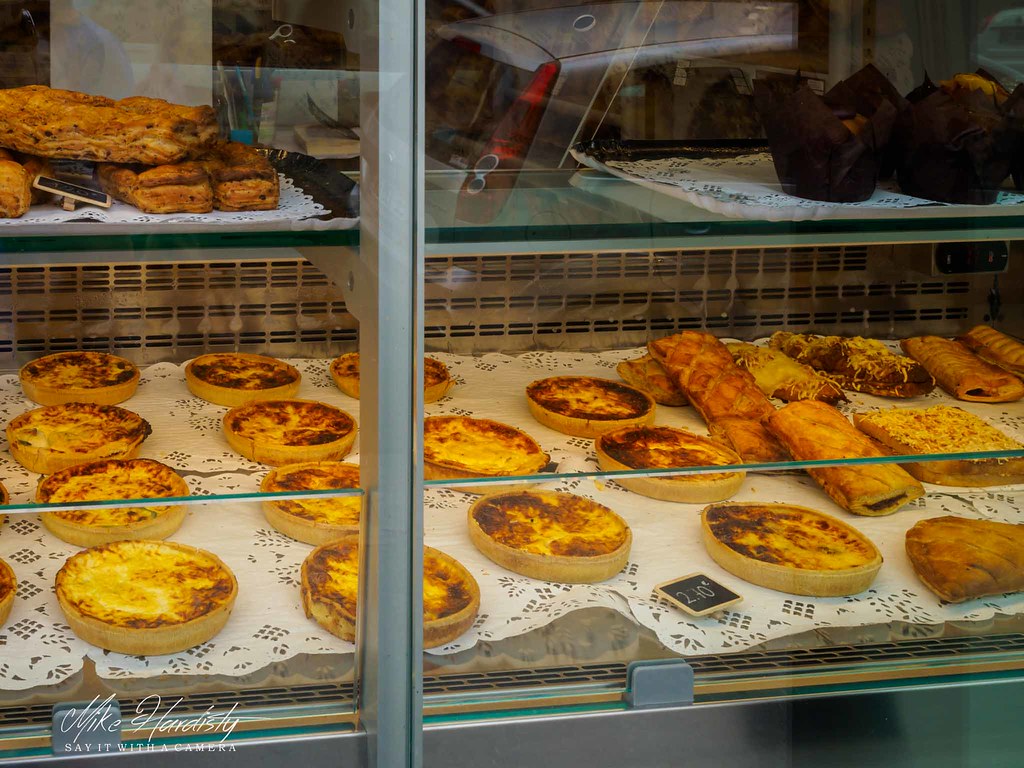 Or perhaps a meal or coffee in a pavement cafe, they’re everywhere. Turn into a narrow street and you’ll find a few tables and chairs outside a cafe. 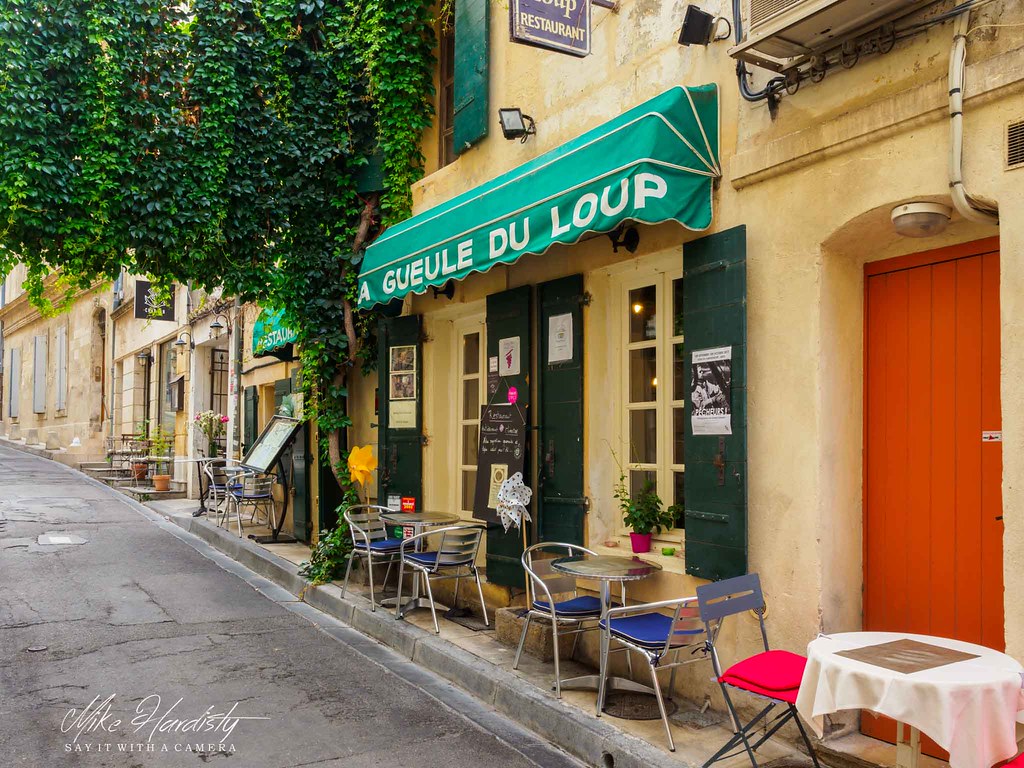 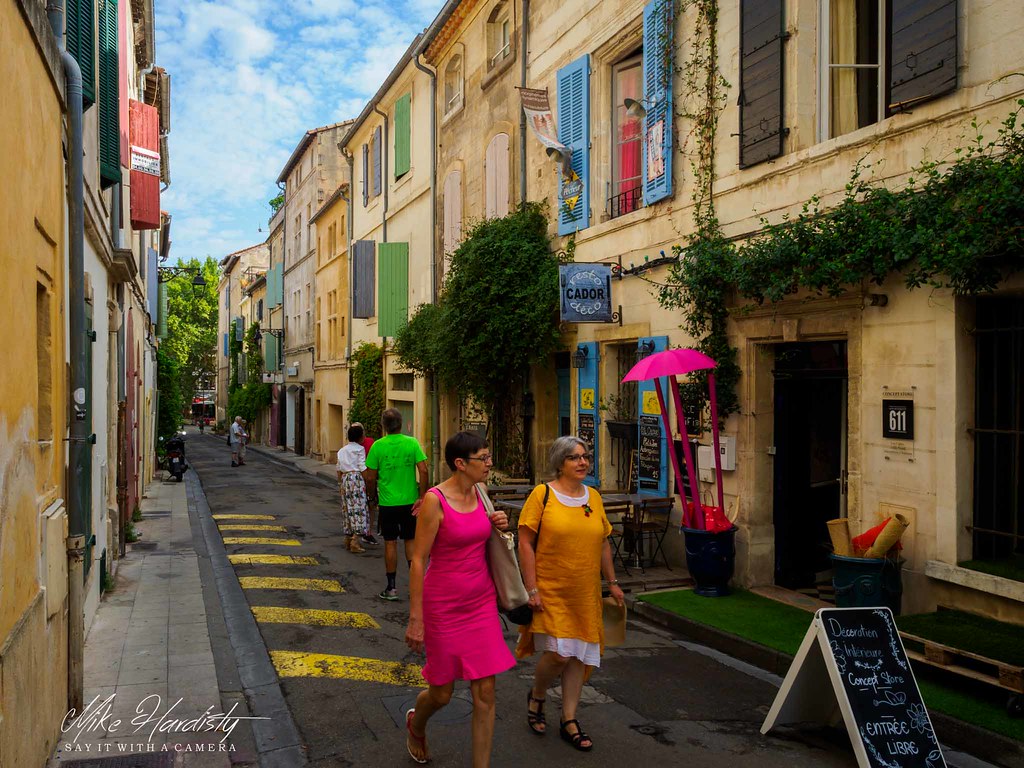 …….and just around the corner, there’s another one. Spot the pink umbrella in both photographs. 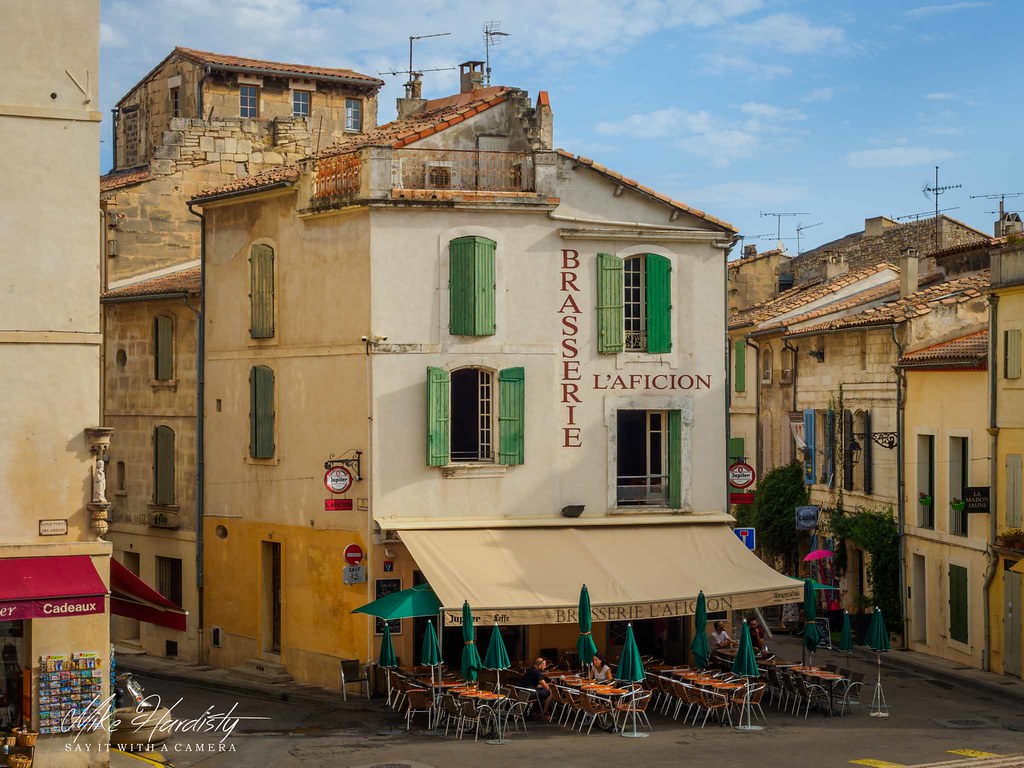 What about those Romans? Did they leave anything behind. Well yes and no. Probably the biggest structure is the amphitheatre. Nowadays it’s used for events, including bull fighting. 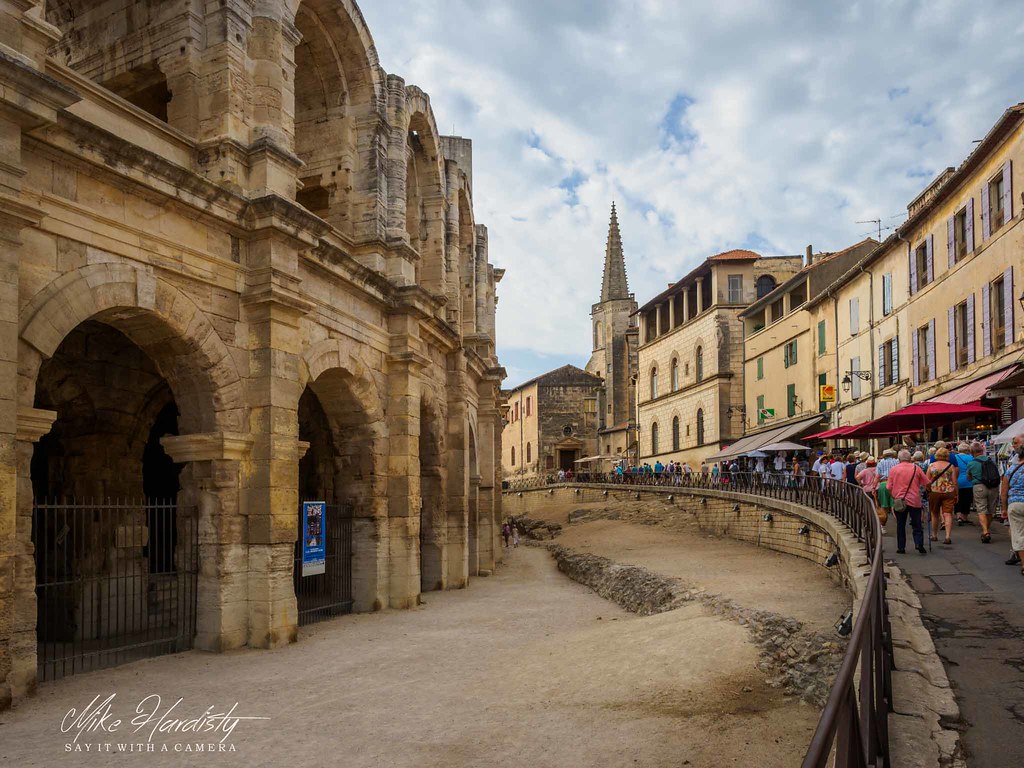 More cafe’s but this one is especial. Remember I mentioned van Gogh. His first painting featured the cafe shown below on a starry night. 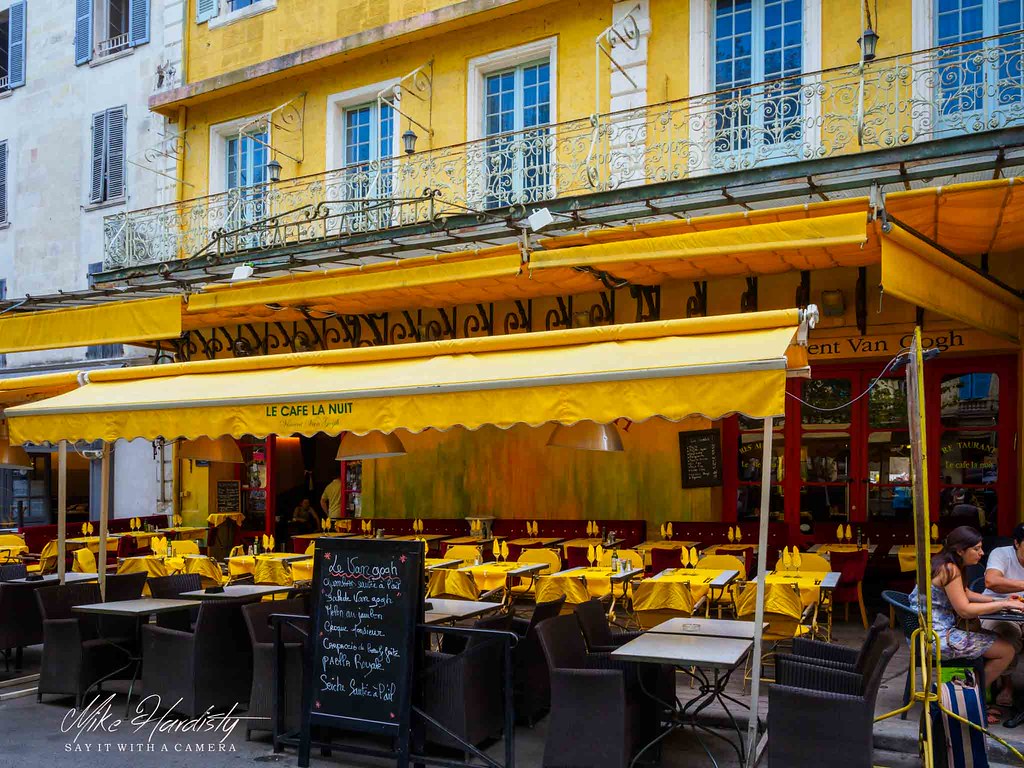 So let’s finish our journey in the centre of the city, at the Hotel de Ville (Town Hall). On the ground floor I found this wonderfully cool area. By the looks of it the area feature in wedding ceremonies because there are lots of confetti on the floor. Dis you know that weddings in France are celebrated by civil partnership first. You can’t have a religious wedding until you have done the civil, which is the official ceremony, first. 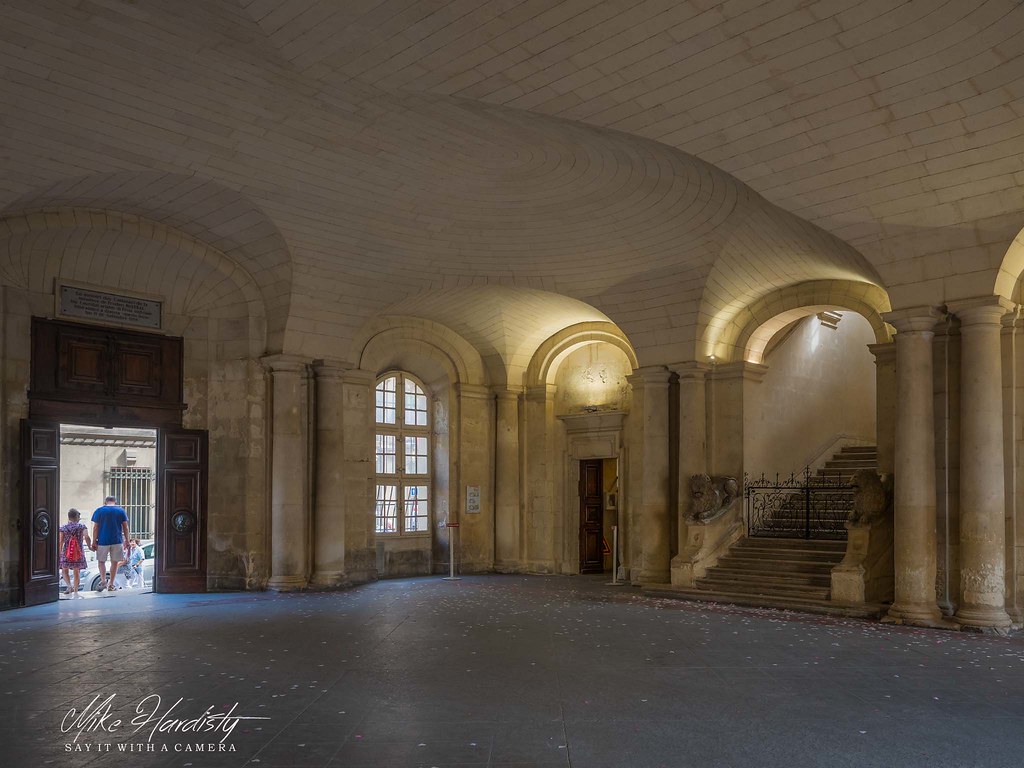 And so to the Place de Republique. The Hotel de Ville is to the left of the photograph and the Church of Saint Trophime to the right. The church was built upon the site of the 5th century basilica of Arles 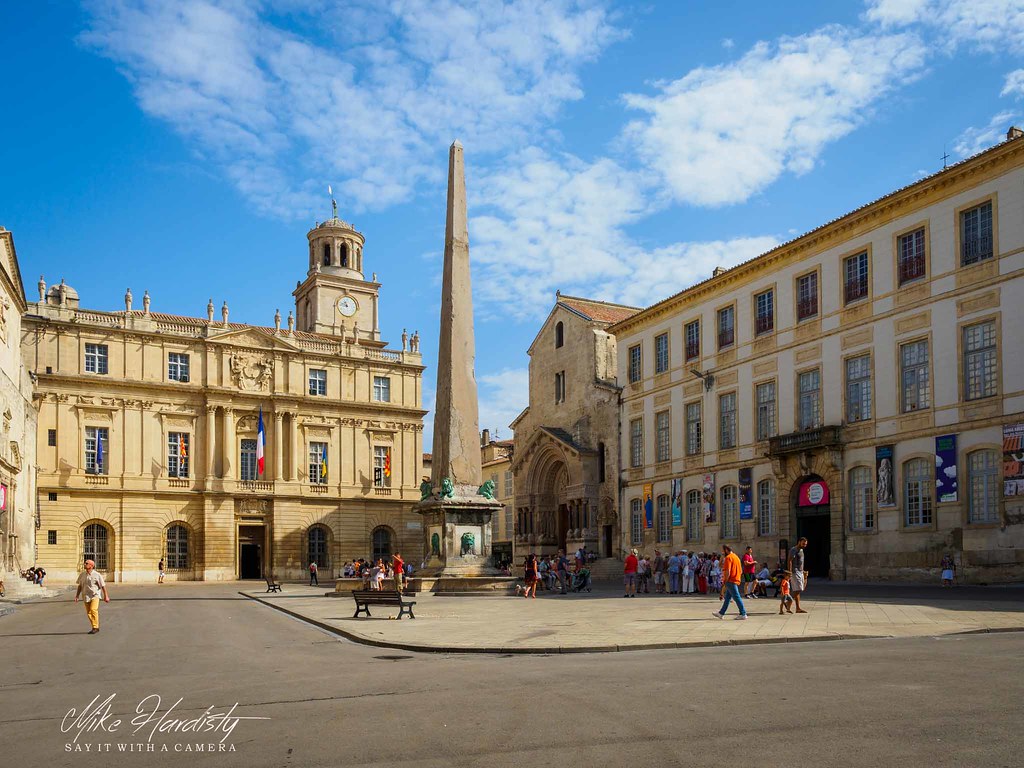 I hope you enjoyed your journey with me around Arles? Coming later in the week “Sous le Pont d’Avignon”

11 thoughts on “Come With Me To Arles, France”