Despite what the traditional French song says, the dance actually took place under the bridge. To be honest, for all that it is famous and immortalised in a song, the bridge didn’t really impress me that much. To give the bridge it’s correct title it is Le Pont Saint-Bénézet.

Historians have argued whether or not the Romans managed to span the River Rhone between Avignon and Villeneuve-lès-Avignon. There is evidence both for and against. However, it is known that the original bridge with a span of 900 metres (980 yards) was built during the years 1177 to 1185, but that bridge was destroyed in 1226 by Louis VIII of France during the siege of Avignon. Around 1234 work started on rebuilding the bridge and it was used until it fell into a state of disrepair in the 17th century.

In 1644 the bridge lost four arches, then a flood in 1669 swept away most of the structure. Today only four arches remain.

Avignon is a great place to wander around with quaint narrow passageways, shuttered windows on the houses, some amazing architecture and the Palais des Papes. In English the Papal Palace. But once again I was disappointed. 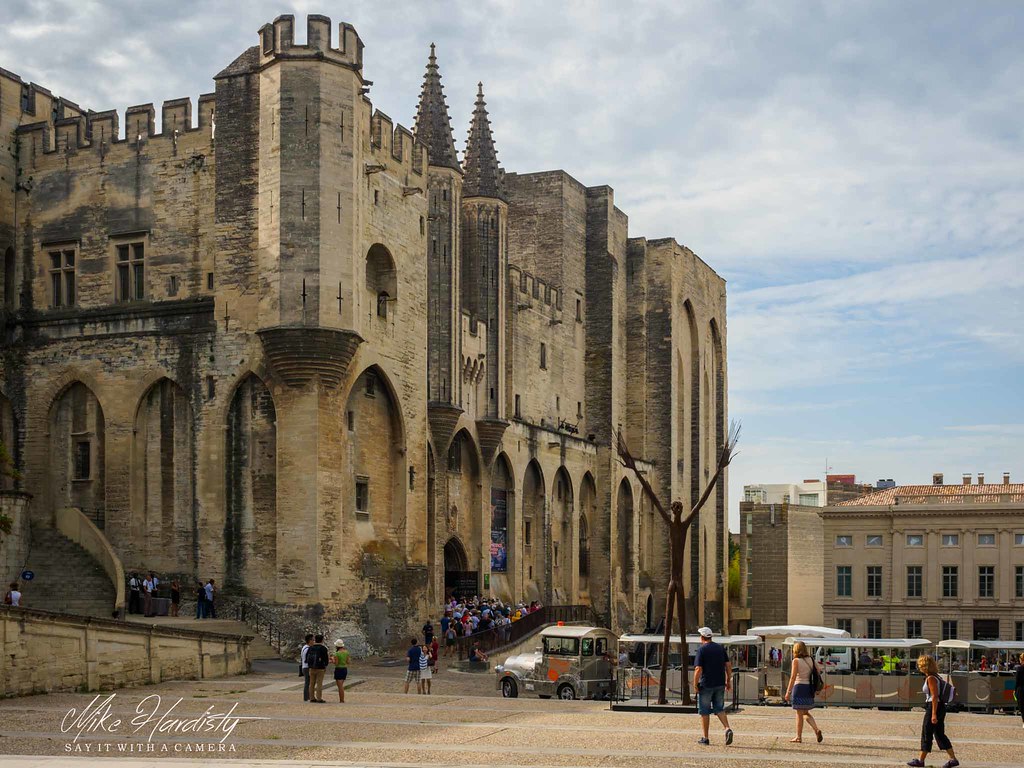 From the cloisters you look out to one of the towers. The other tower, the bell tower doesn’t even have the original bell. It was replaced some time ago 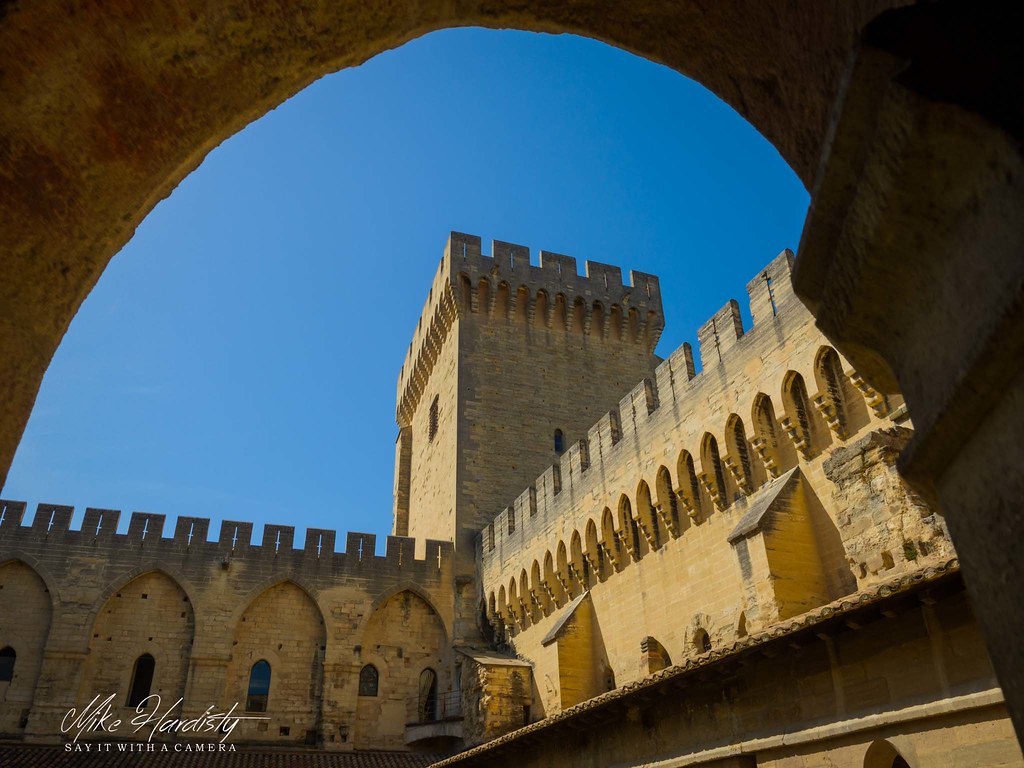 Nice statues. I thought maybe they were off the walls or from inside a church somewhere. Nope! Modern day made. 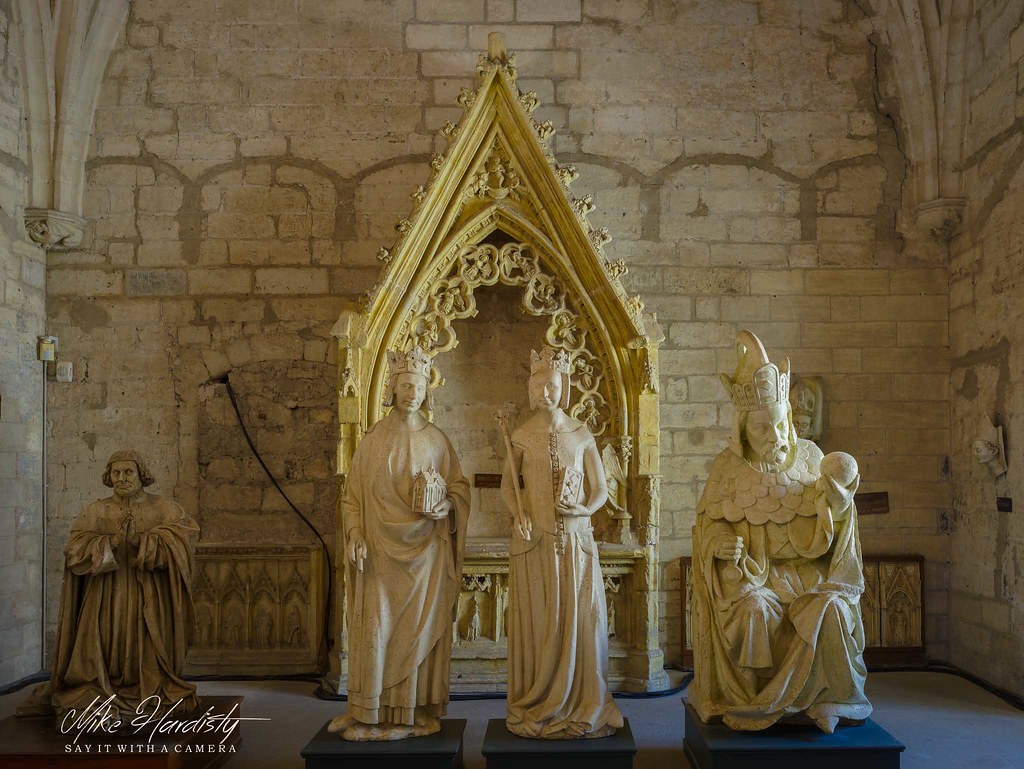 To be honest I gave up thinking about the history behind the building. Everywhere we went our guide kept telling us things were not original or the original artefacts had been removed. So I stopped listening to the guide and just went around looking for photographs of the more impressive features that I could take. 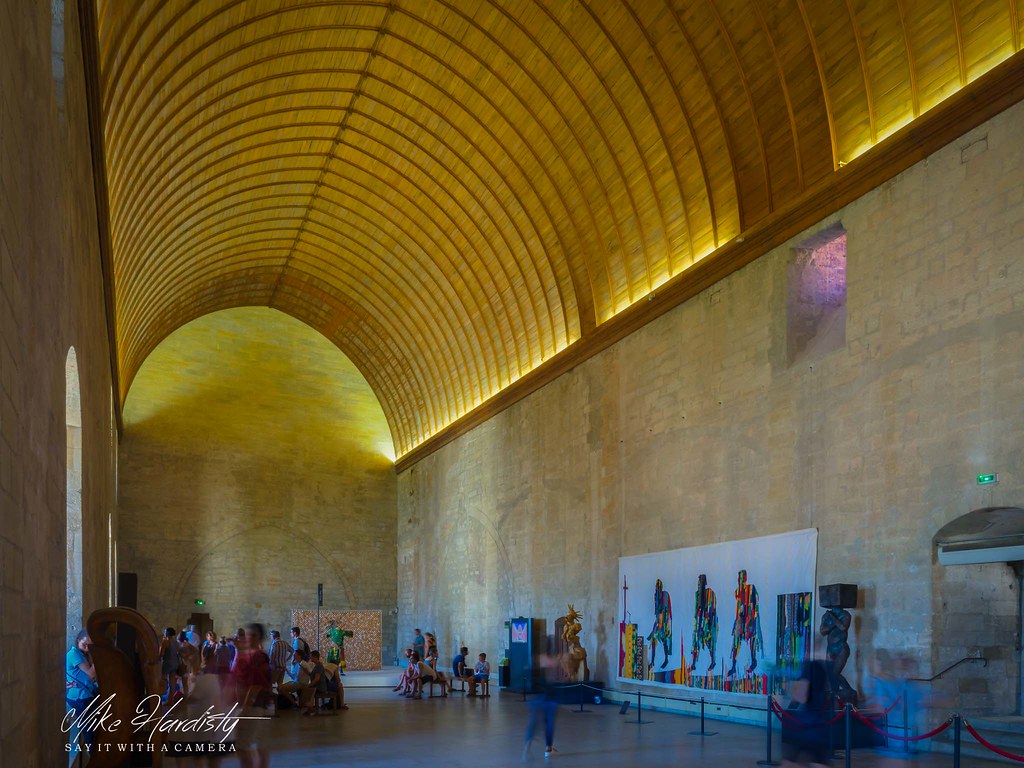 Of course, no tripods allowed and in low light that makes for difficult hand-held shots. You just can’t get away from people so they are included as well. Some look like blurred ghosts because my shutter speed was so slow. 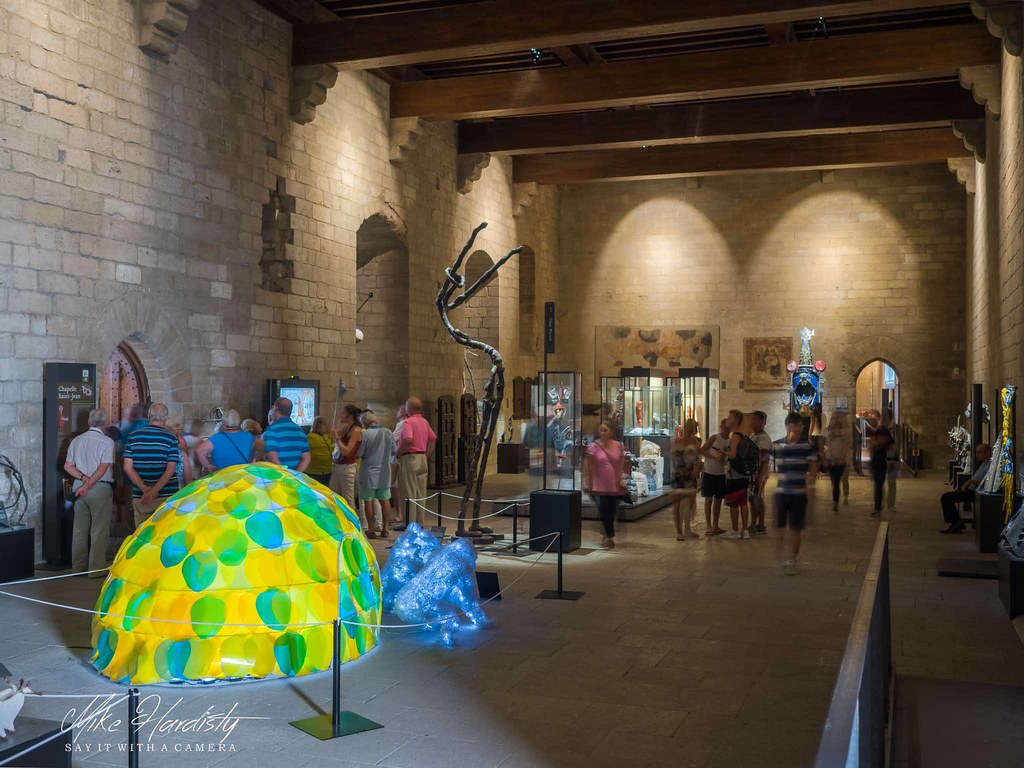 Back into the daylight and the heat. It was hot, hot, hot, hotter than Arles. So wandering around some of the narrow passages in the shade was a bonus. 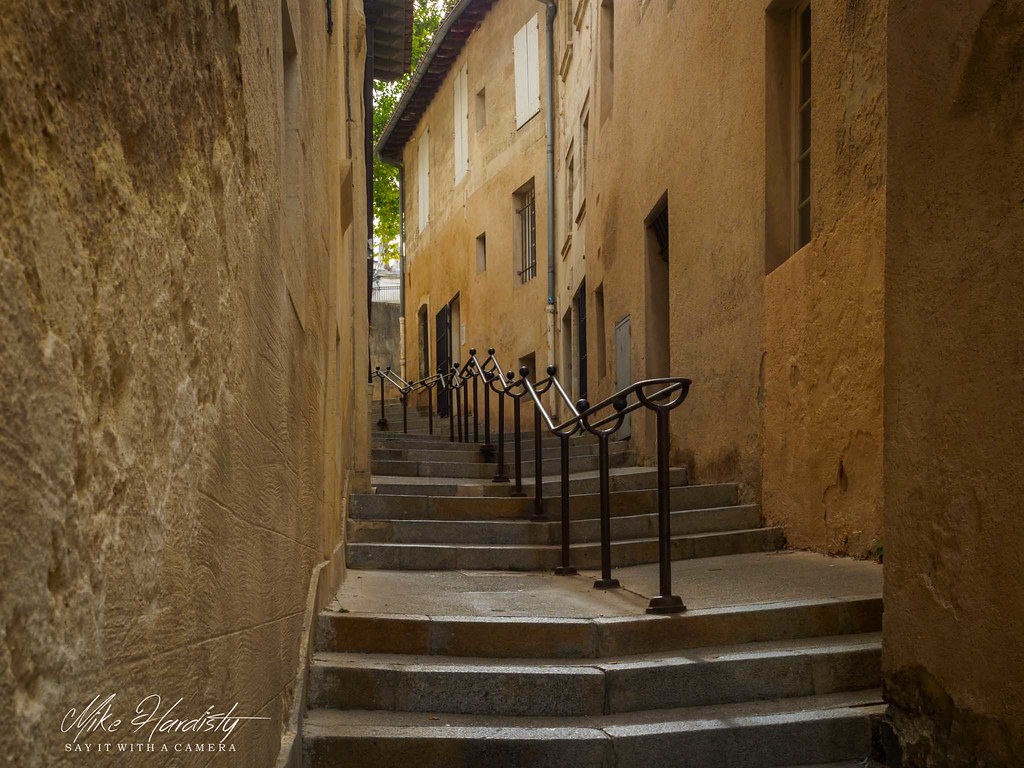 The locals have shutters on the windows, keeps the heat out, whilst letting some light in. Can you see that little stone plaque bottom left of the photograph. The building’s not that impressive, but it was here that the Montgolfier brothers who are best known as the inventors of the hot air balloon made their first experiments in 1782. 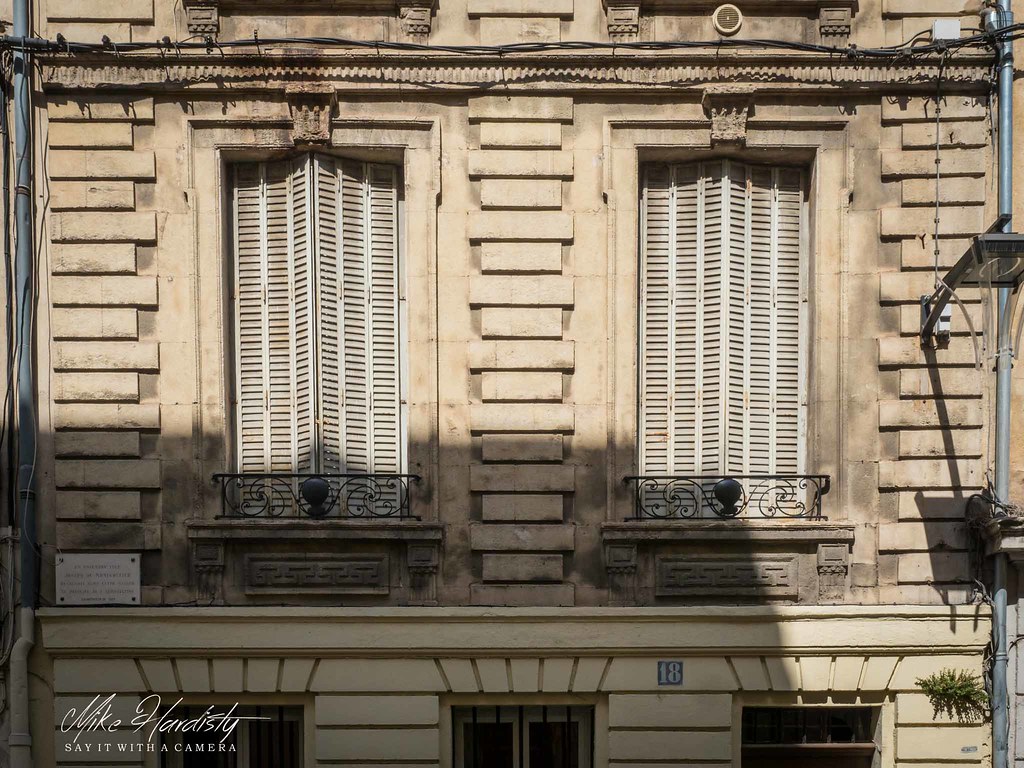 Earlier I mentioned the architecture. Look at the theatre. I would have loved to have a walk inside but it was a strict “non” from the gatekeeper. 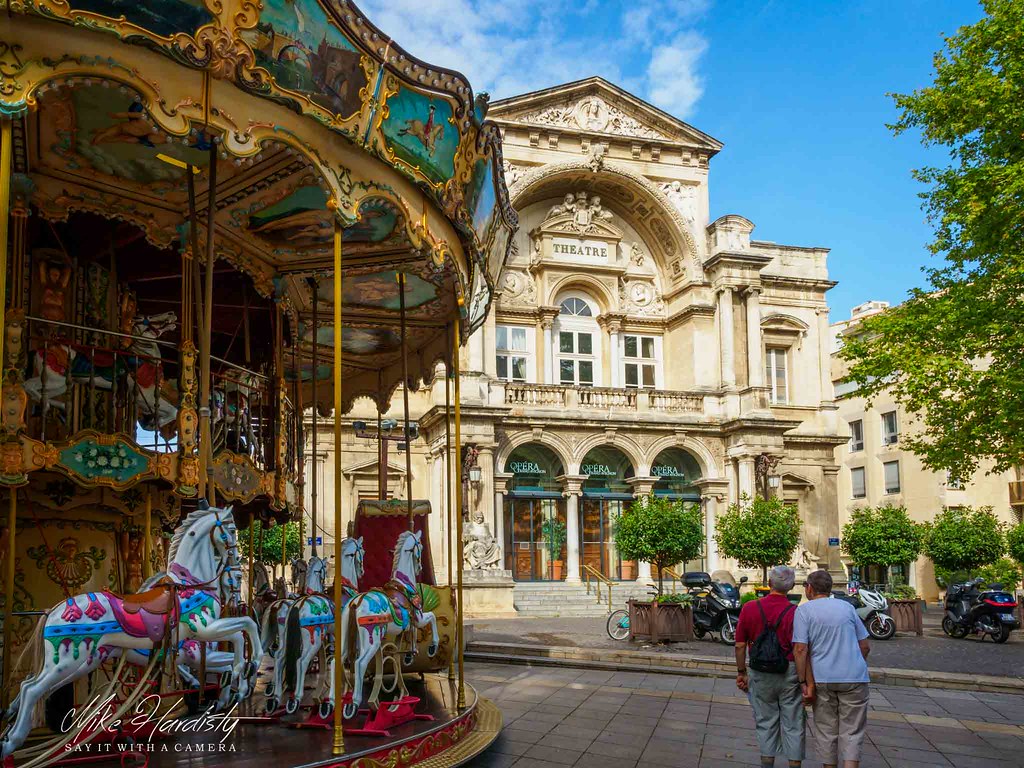 Tourists are everywhere, heck I’m one myself…and where there are tourists there are tourist shops. Surprisingly, this one a bit off the beaten tracks did have some items at reasonable prices 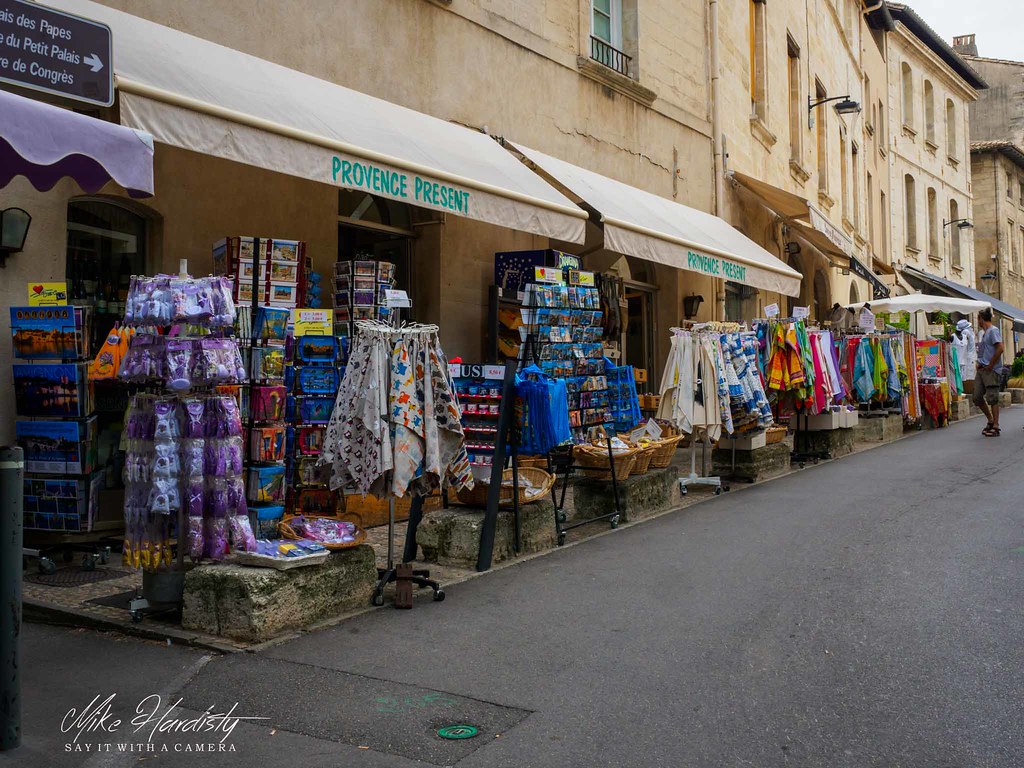 And of course, you can’t get away from the inevitable painting seller. Don’t know if he painted them but I wasn’t tempted after seeing the way the one worked in Arles. 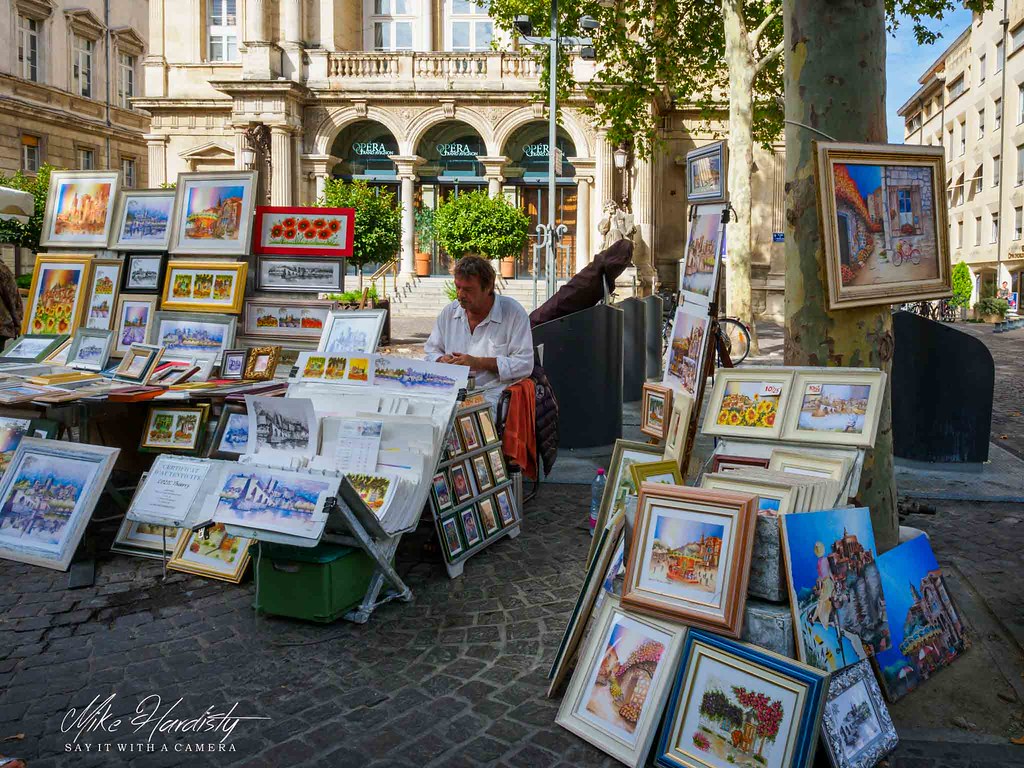 Well that’s it from Avignon. I spent a lot of time on this visit waiting for people to move out of my line of sight so I could get a photograph but in the end it was impossible.