It’s 6:30 am, just getting light and there is torrential rain falling. That’s not good! I’ve got a photography day out with Olympus on the Llangollen Railway today and it looks like it’s going to be a total washout.

Olympus, the manufacturers of my camera, the magnificent Olympus OM-D E-M1 Mark 2, regularly run photography events throughout the country. It’s a chance to meet other Olympus users, talk with Olympus professionals, get technical advice and even borrow gear to try out for the day.

So 9.00 am finds me outside Carrog Station and the rain is still pouring down. 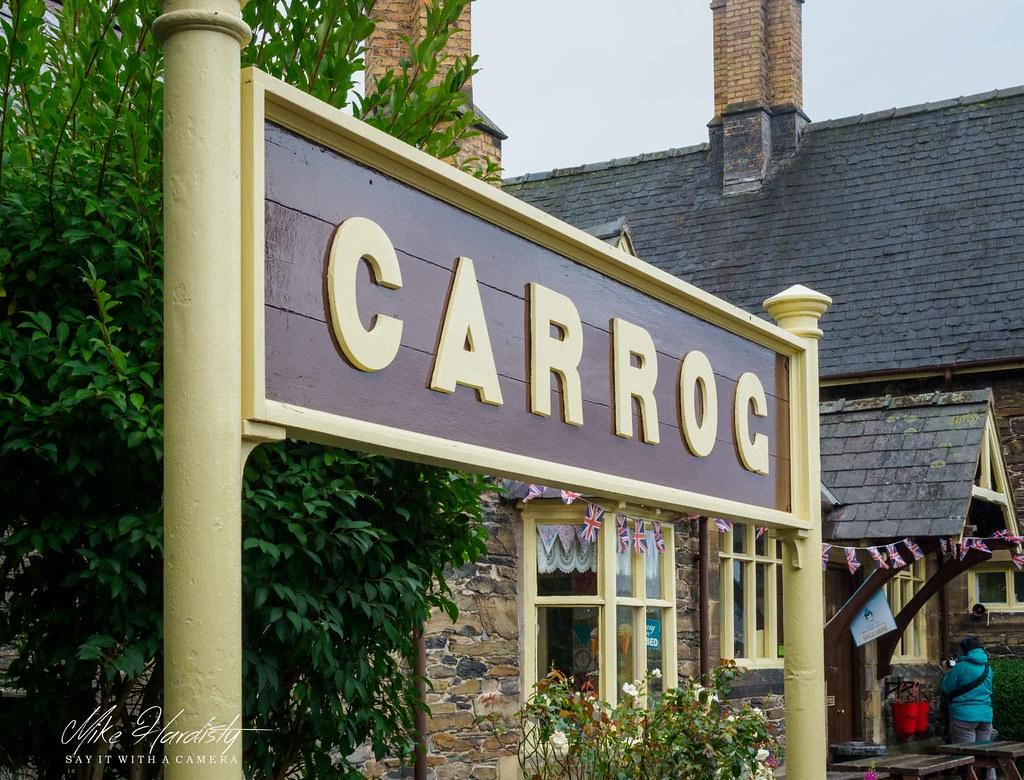 At this point I should maybe explain that the Llangollen Railway is a heritage railway, running older stock along a stretch of line that had to be rebuilt. The stations have the old British Railways look as does much of their rolling stock. So for a photographer, there’s plenty to photograph.

Our day was extra special though, as well as David and Chris from Olympus on-hand to give us technical advice and help, we also had Duncan from the Llangollen Railway to give us some great info about the railway and later escort us around the workshops. Something most users of the railway don’t get to see. More photography opportunities.

My thought for today was to keep it simple. With the rain lashing down I was going to stick just the E-M1 and the Olympus M Zuiko 12-40mm f2.8 Pro lens. Olympus claim that “a clever system of seals makes the E-M1 Mark II splashproof, dustproof and freezeproof down to –10°C. So you can keep shooting in any weather and any environment”. And the same goes for the 12-40 lens, so now was a good time to test that out. Although I have to say I have used this camera and lens combo before in adverse conditions, but not for a whole day of working.

Disclaimer: I am not affiliated, associated, authorised, endorsed by, or in any way officially connected with Olympus UK. I use Olympus cameras and lenses because it’s my personal choice to do so.

One of the great things about having Duncan with us was that we were allowed access to areas the public doesn’t normally get to and as a welcome respite from the rain we were allowed to visit in pairs the signal box at Carrog station. Modern railway systems in the UK are fully automated so it’s only on heritage railways that the old system of levers connected to wires along the track is still used. Using the levers the signalman could control the points and signals along the stretch of track that he was responsible for. 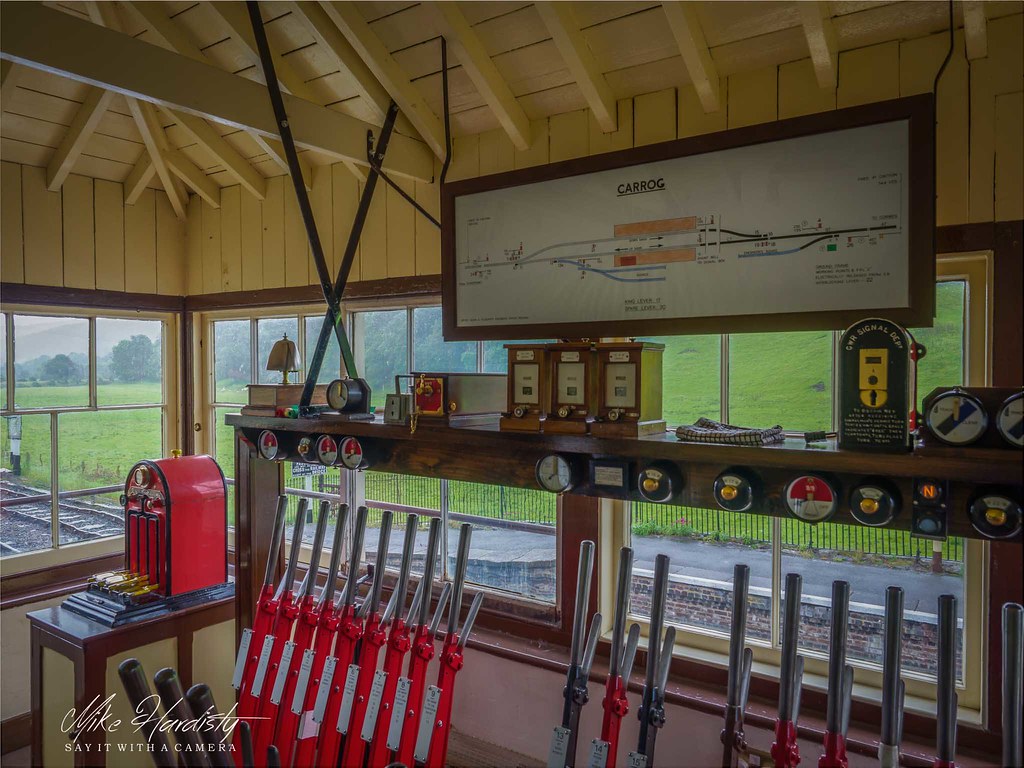 Our train arrives on time and we are going to get on and do the short run up to Corwen station. 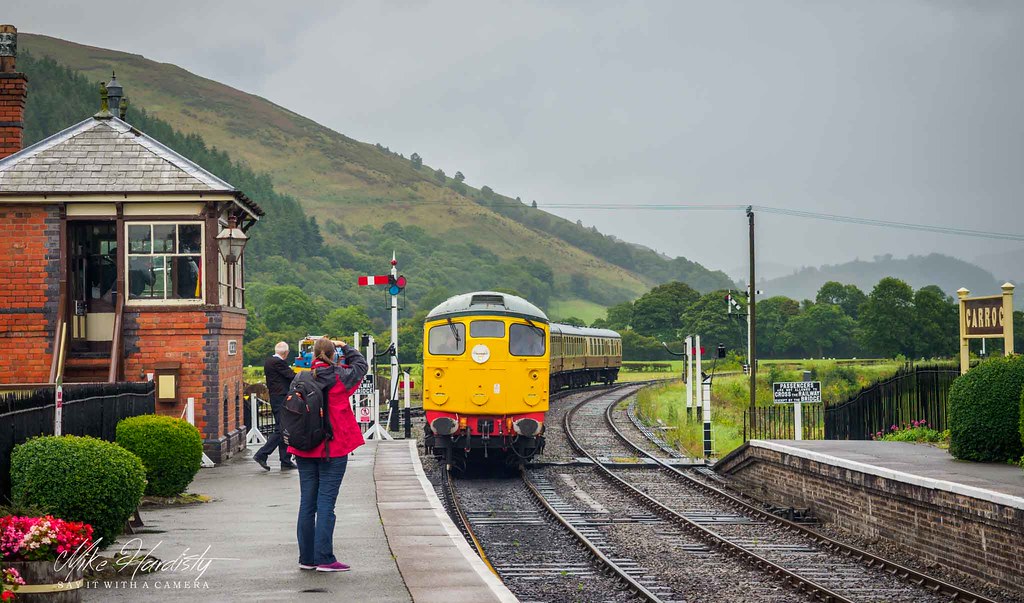 This is a new stretch of line, about 2 miles, and currently there is a temporary platform. Although Duncan did tell us a new permanent platform was being built about 400 metres further up the line. 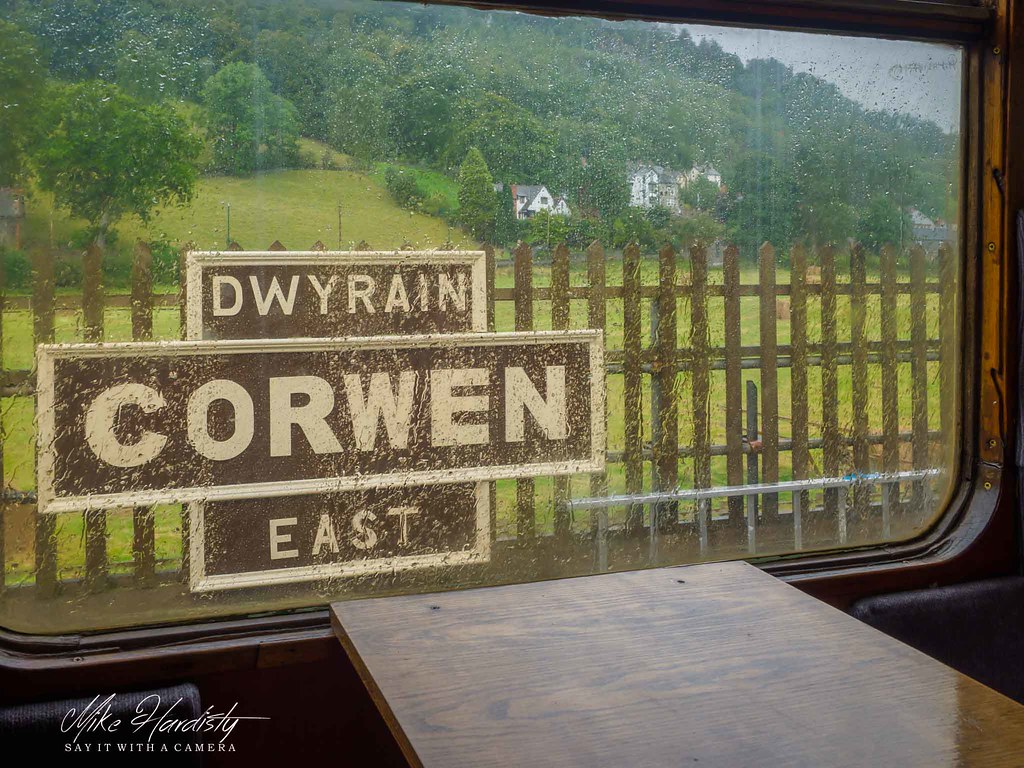 What’s it like on the train. Well for a start the carriages are old but they have so many features that I can remember as a young man when I used to travel by train a lot. I mean, little compartments that seat about 6-8 people. Perfect for sleeping. Here’s a little story about this type of carriage. When I was just 18, boy that’s a long time ago, I was living and working near Bristol. About once a month I used to go home to Glasgow and catch the overnight sleeper. None of the luxury of a proper bed for me though. Right at the very front of the train, and it was a long one, with sleeper carriages and car transporters, there was one carriage like this, right next to the diesel units. 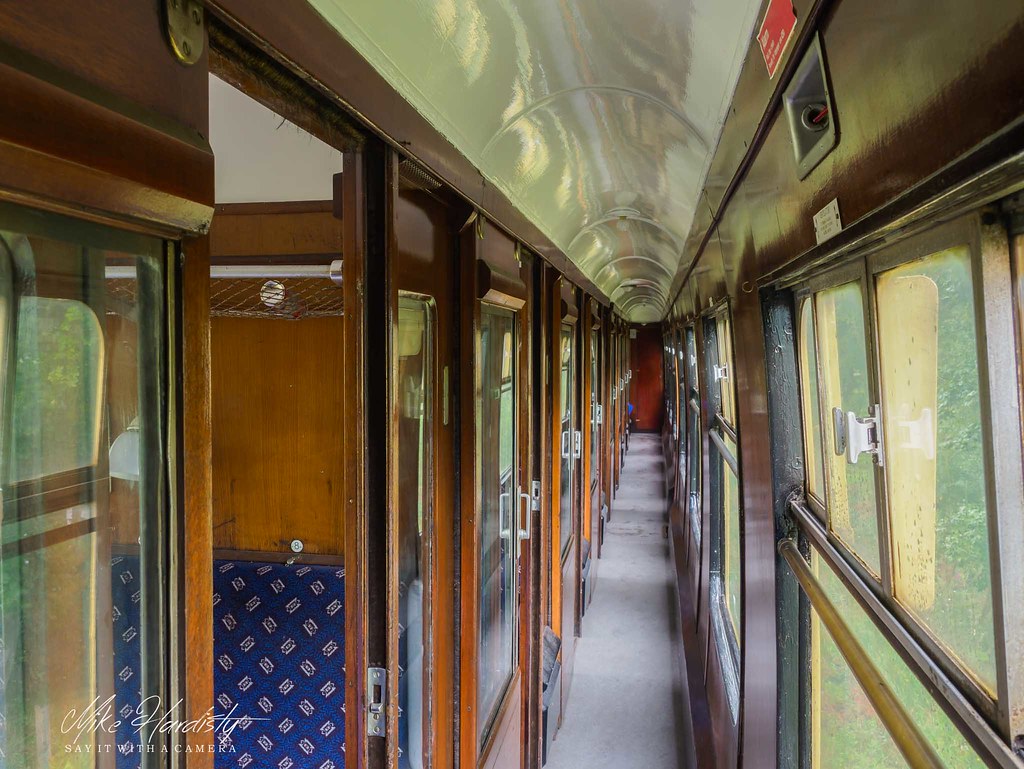 The idea was to get on, draw the curtains and hope that no one was willing to walk the far length of the platform to get into this carriage. The overnighter only had a couple of stops, so if you were lucky you’d get a reasonable nights sleep, quite cheaply. Didn’t always work out like that though and then you glared daggers at the person invading your space. But that’s another age.

Of course. sometimes they didn’t put the compartment carriage on and then it was slum it in the upright seats and boy they were uncomfortable, especially overnight. 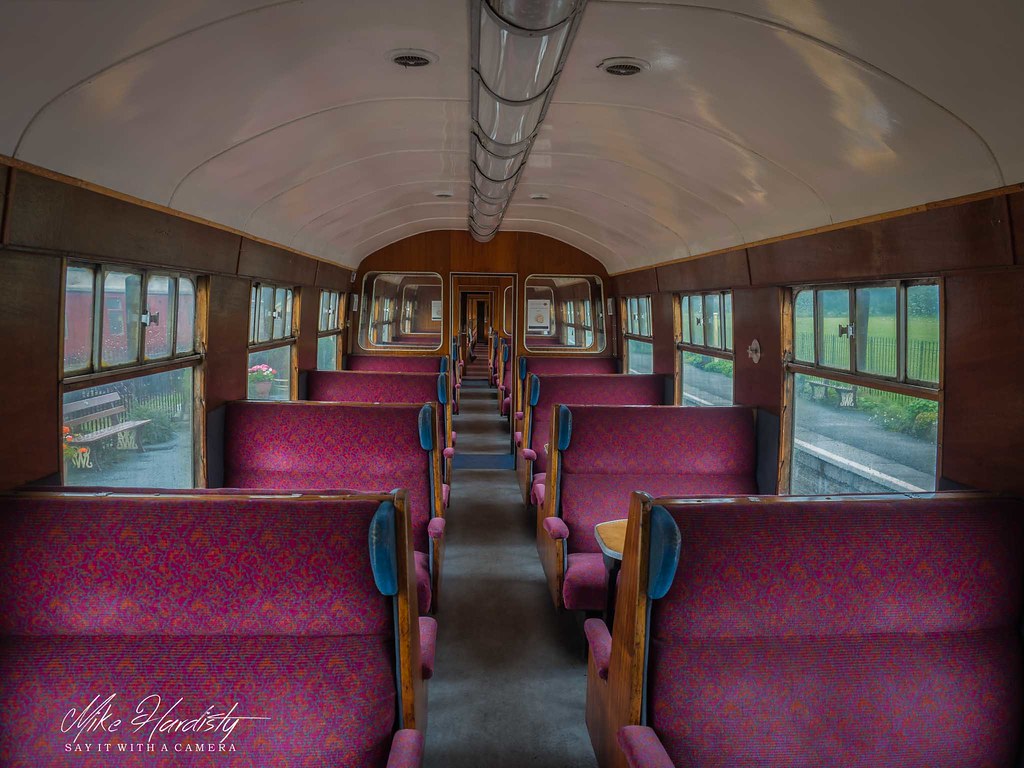 So let’s get on with it. It’s still raining and we’re back at Carrog now. 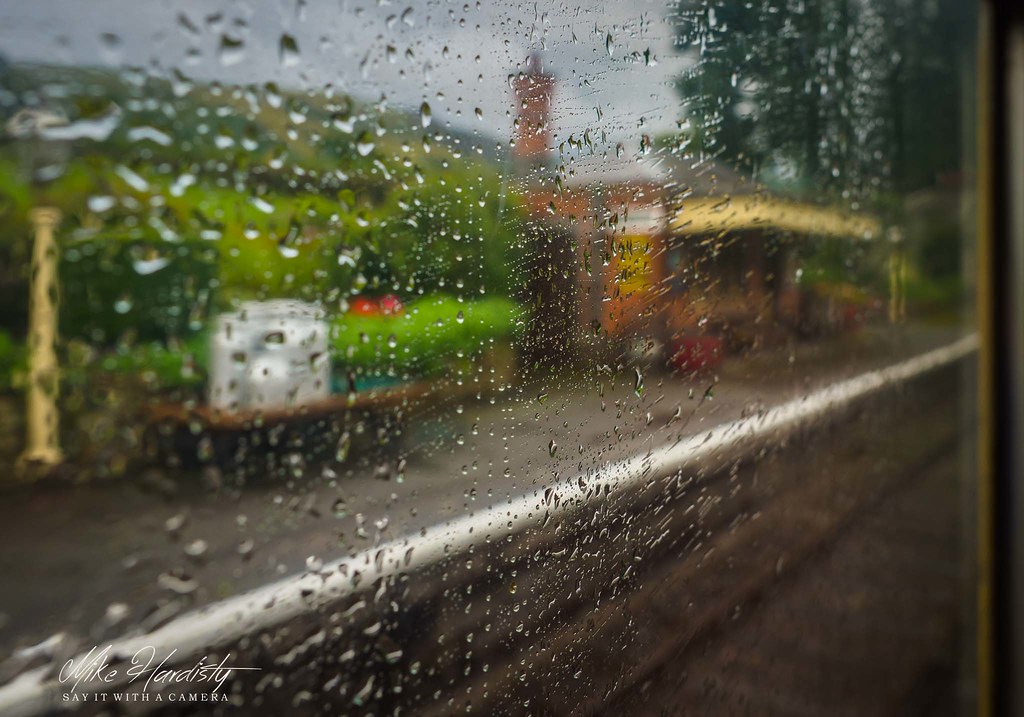 There’s a short delay whilst the diesel unit is transferred to the other end of the train, ready to make the journey to Llangollen, via Glyndyfrdwy and Berwin stations. During the changeover I was able to grab a quick photograph inside the cabin of the diesel unit. 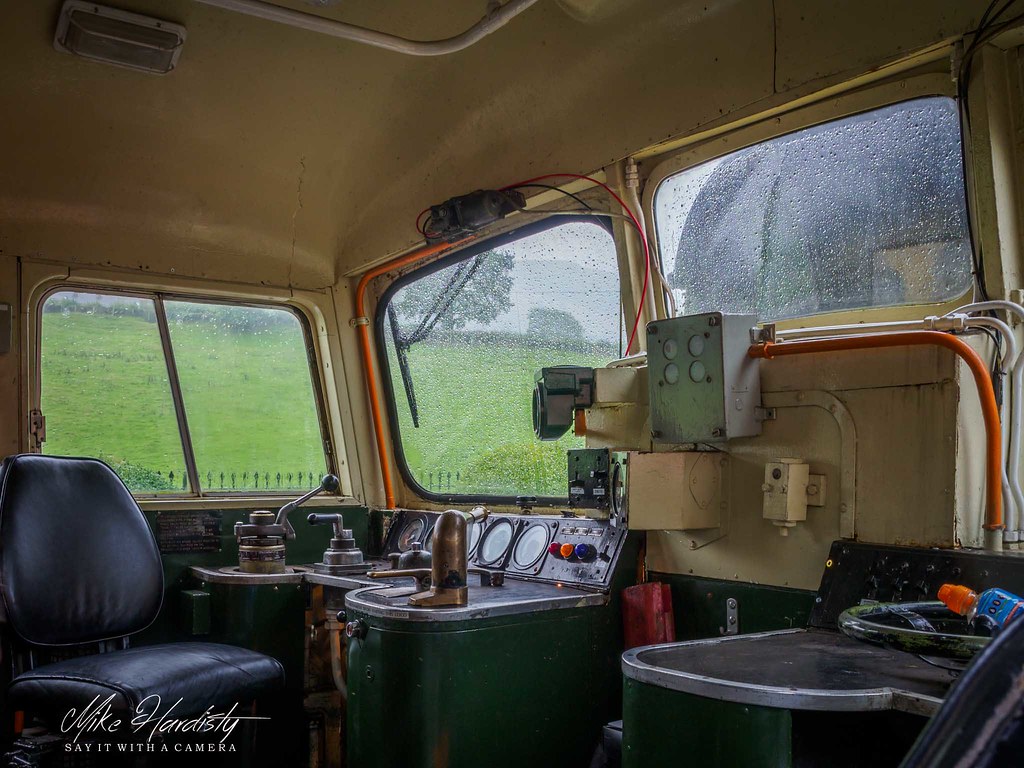 I should mention here, that all of the inside photographs on today’s post were taken using the HDR function of the E-M1. I used bracket sets of 3 photographs (-2, 0, +2 Ev), all hand-held without a tripod. No HDR software though. I mainly use Luminosity Masks now to combine my bracket sets. 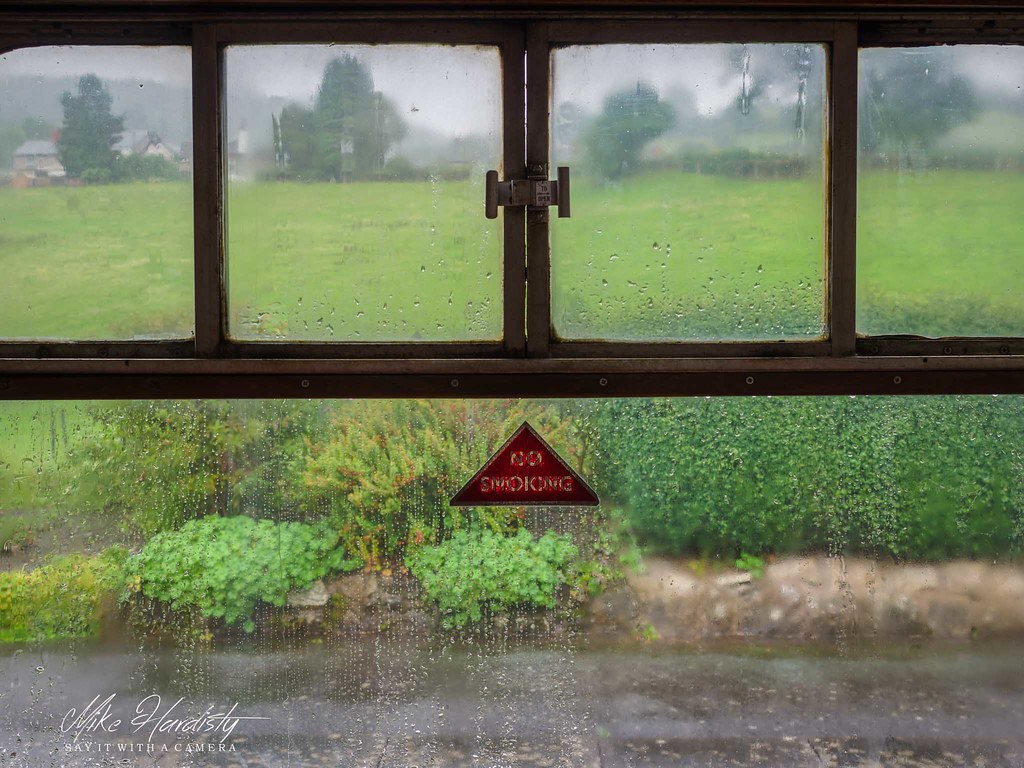 Oh! This brings back memories. No smoking compartments. Unlike today, these were few and far between on trains. Heaven help anyone who tried to light up in these sacrosanct carriages. If I remember rightly it was also punishable by a fine of about £50 for smoking in the “No Smoking” carriage.

There’s a short delay at Glyndyfrdwy as we wait for the steam train to come up the line on it’s way to Carrog. Apparently there’s a large group of American tourists on this train, from a cruise ship docked at Liverpool. There’s also a wedding party. 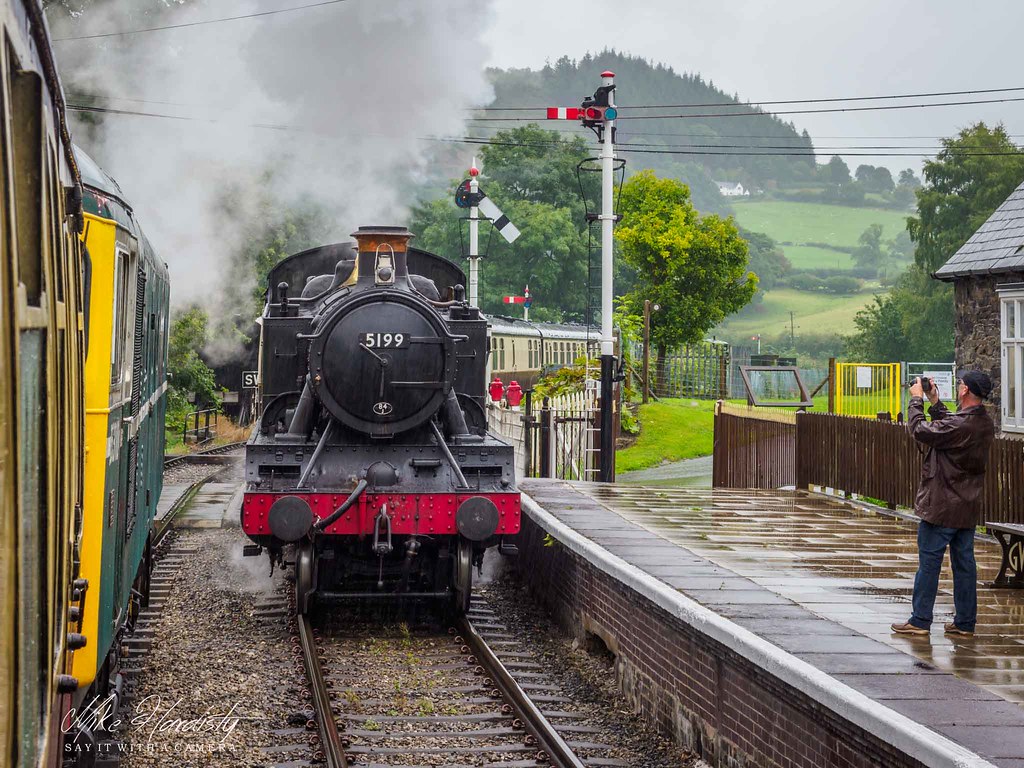 Next stop is Berwin, You can get off here for the Horseshoe Falls. It’s a bit unfortunate but just as you approach Berwin Station there is a bright orange barrier which stops you getting a better angle for a photograph of both the bridges over the River Dee. 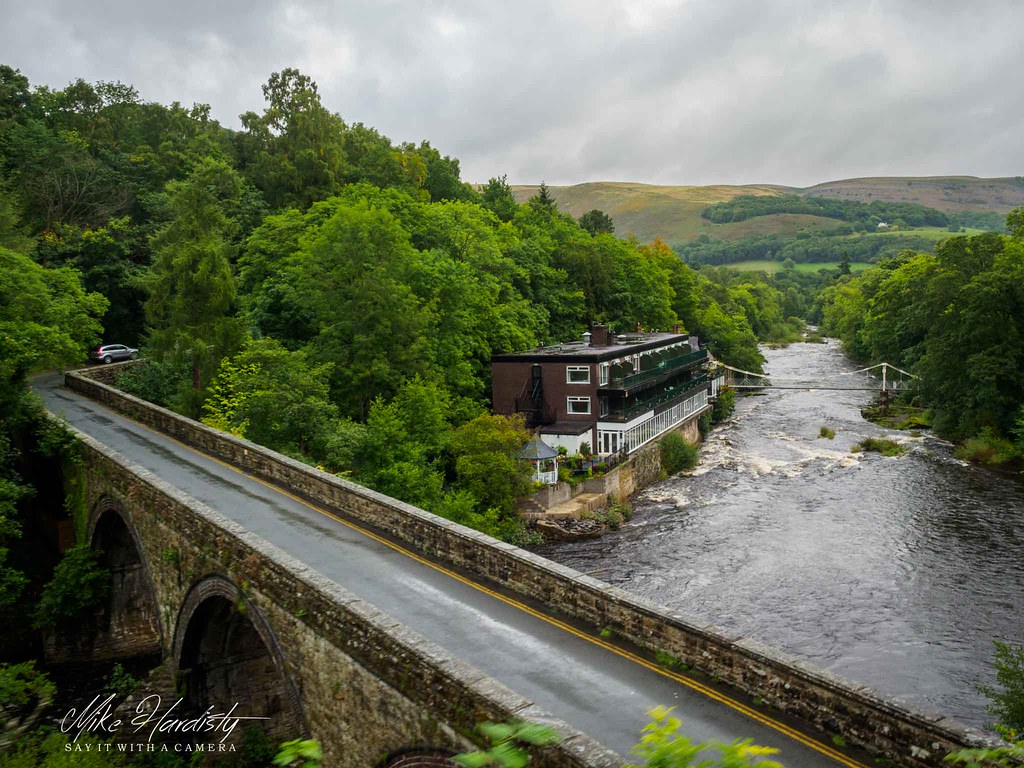 As soon as we reached Llangollen it was straight to the workshops for our tour with Duncan. For these next few photographs I was tempted to use HDR software and get the photographs really grungy but in the end I decided to stick to my resolution to wean myself off HDR software and instead use Luminosity Masks. 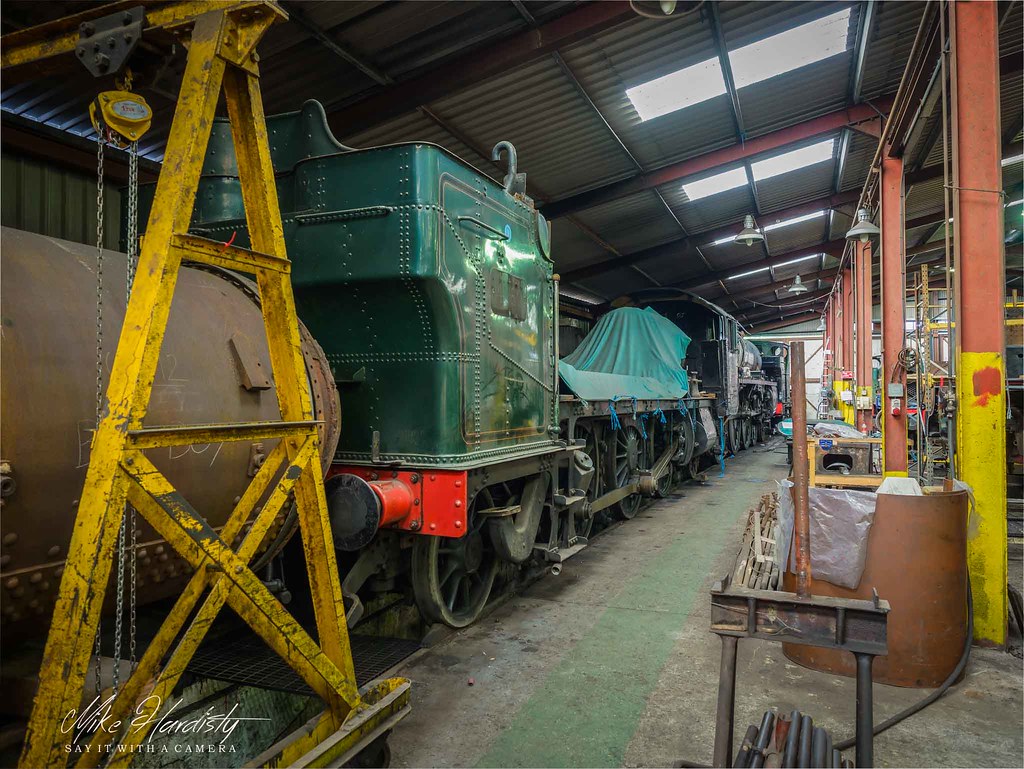 It was hard, but I persevered. Now this is where I know I made a mistake. Even although I was using HDR brackets I didn’t compensate enough for the extremely bright light coming from those overhead skylights. 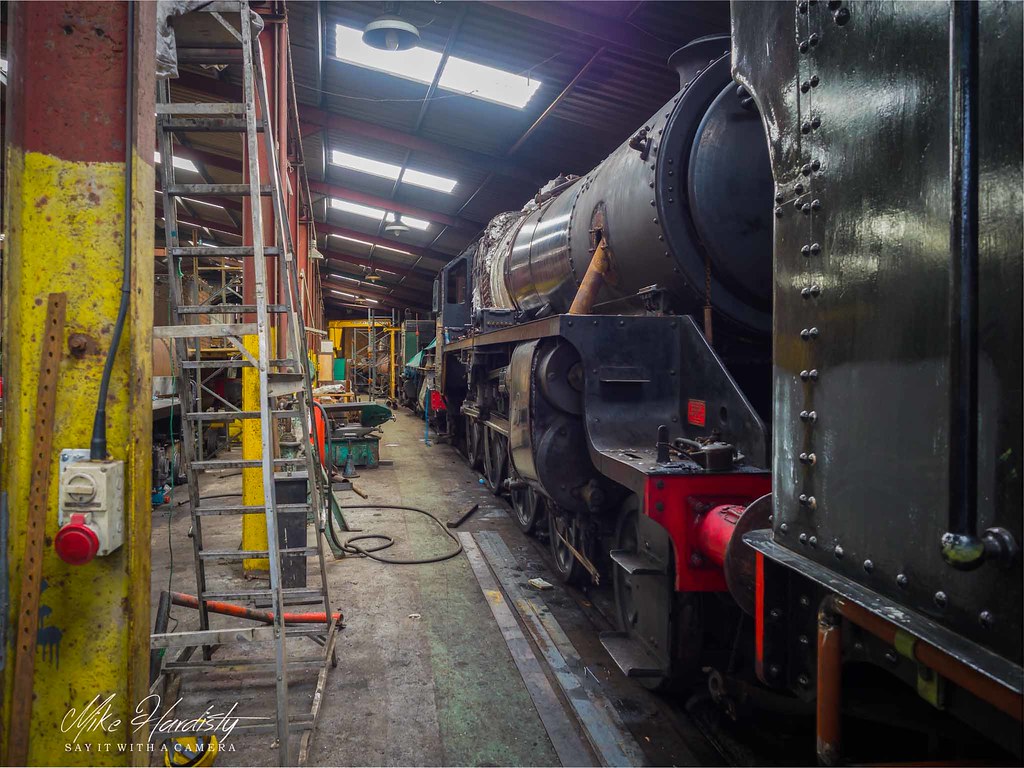 If I had been using a tripod I would have taken more time over exposure, ISO etc., but I was having to be extremely quick as we only had a limited time with Duncan.

At last, the sun has come out and the bride is giving that Canon photographer a strange look. As much as I was tempted to go and grab some quick photographs I didn’t want to be like Uncle Bob. We’ve all seen them at weddings. Got a reasonable bit of kit, fancies themselves as a pro tog and generally gets in the way. The E-M1 is capable of handling a wedding, inside or out, but let the pro get on with it and just sneak a quick one from the other side of the platform. 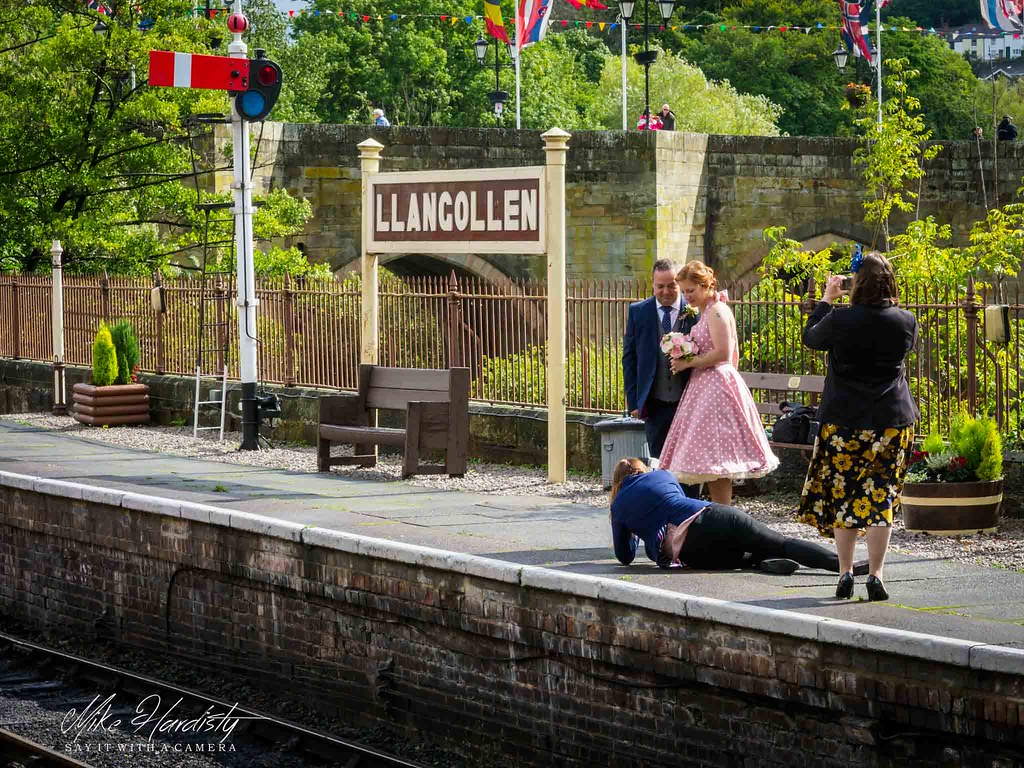 It’s finally time to head back to Carrog station, this time riding on the Puffing Billy. We always called them that when we were kids. There’s something about steam trains that diesel ones just can’t match. It’s not the steam or lack of it. It’s the smell. Although to be fair my journey back to Carrog wasn’t as smooth as the diesel unit on it’s way to Llangollen. 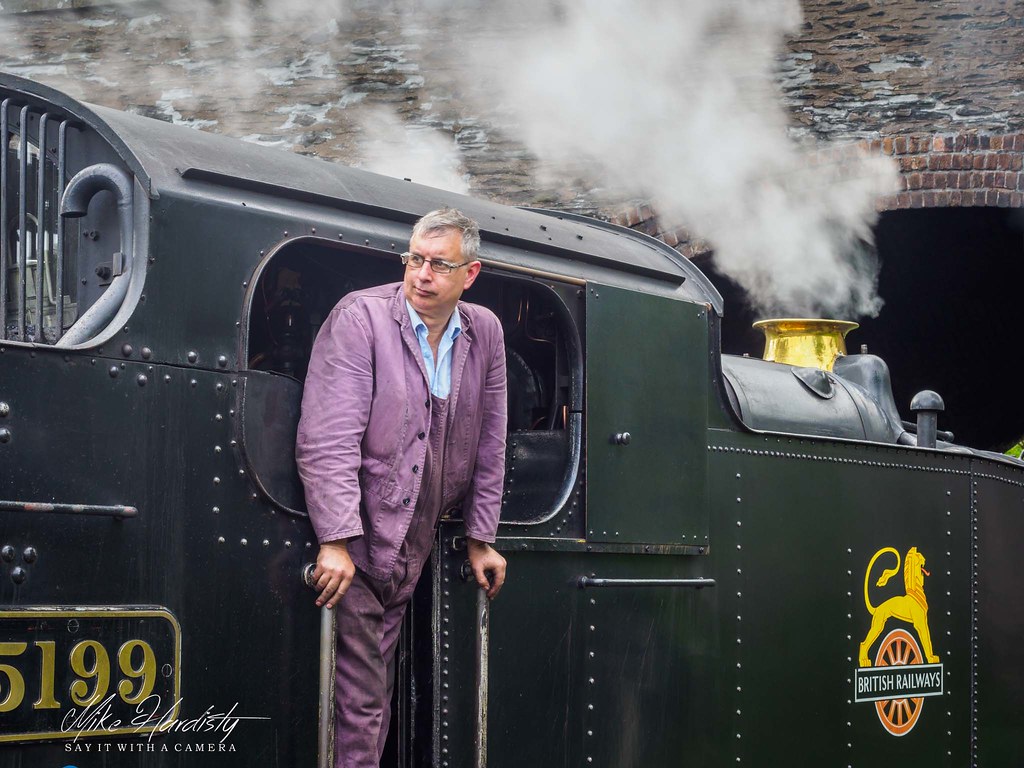 That’s it. I hope you enjoyed the photographs? If you get the chance come to Wales and get on the Llangollen Railway. Better still spend some time in the area, there’s some great countryside and Snowdonia isn’t that far away. 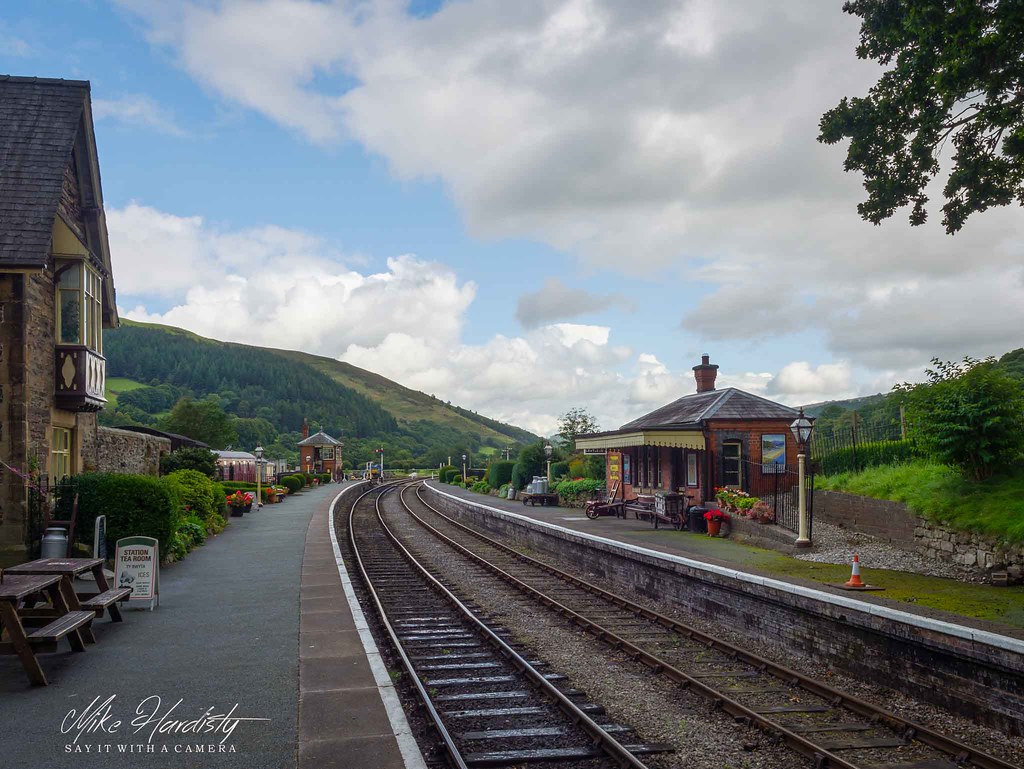 Unit the next time – Mike