As a kid growing up in Glasgow I can remember when little Frenchmen with striped shirts and a black beret would cycle around the streets selling their onions. Each summer they would suddenly appear, their cycle bedecked with strings of onions, to us kids it was so exotic. How I wish I was into photography then.

It’s 9:15 in the morning, the sky is blue, the temperature is rapidly rising and I’m in Tournon during the annual onion festival. Held every year for more than 700 years on the 29 August and it is reckoned that more than 1000 people will be exhibiting their wares.

Onions, I’m in France, Onion Johnny is going to be here, I just know it, Johnny I’m coming to photograph you.

So here we are, down by the river I find a statue to probably the first Onion Johnny. But a quick bit of research soon proves me wrong and then to make matters worse I find out that the traditional Onion Johnnies come from Brittany and we’re definitely not in Brittany. Good old Marc here was a bit of an entrepreneur and inventor, being the first to develop a wired suspension bridge in continental Europe. In 1829 Seguin designed two steam locomotives that used an innovative multi-tube boiler design. This gave more power to the engines and allowed them to increase speed from about 4 mph to around 25 mph, making rail travel commercially more viable. 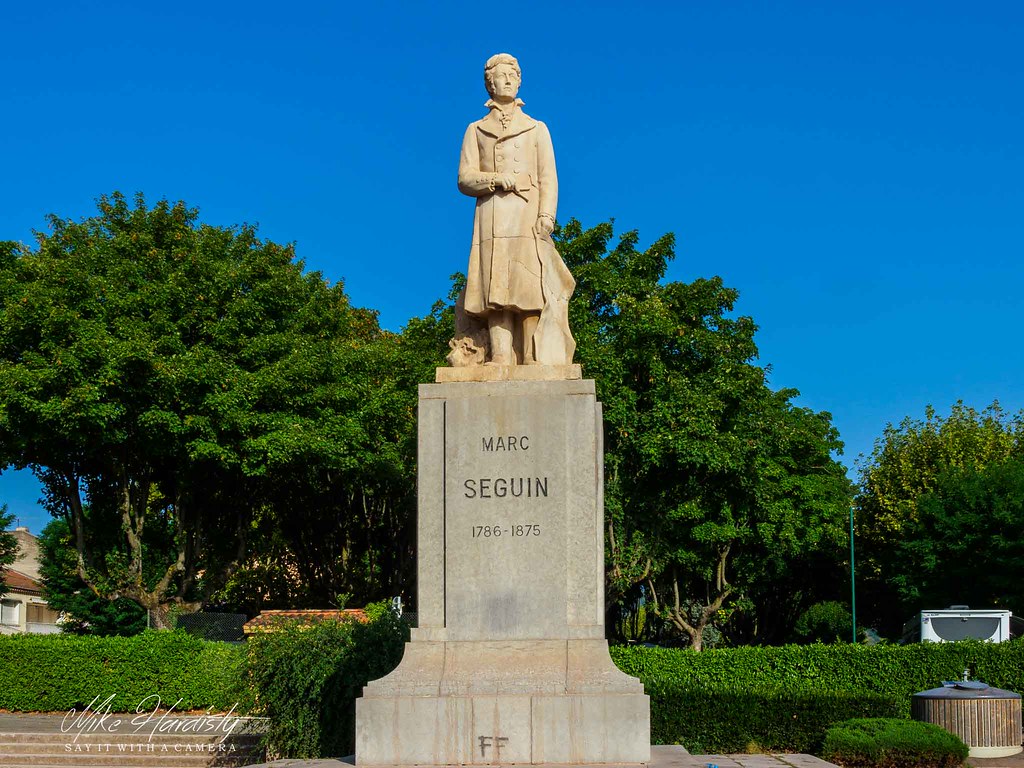 Did I mention that Tournon has a castle? More on that later with a second post from Tournon, probably about Wednesday. 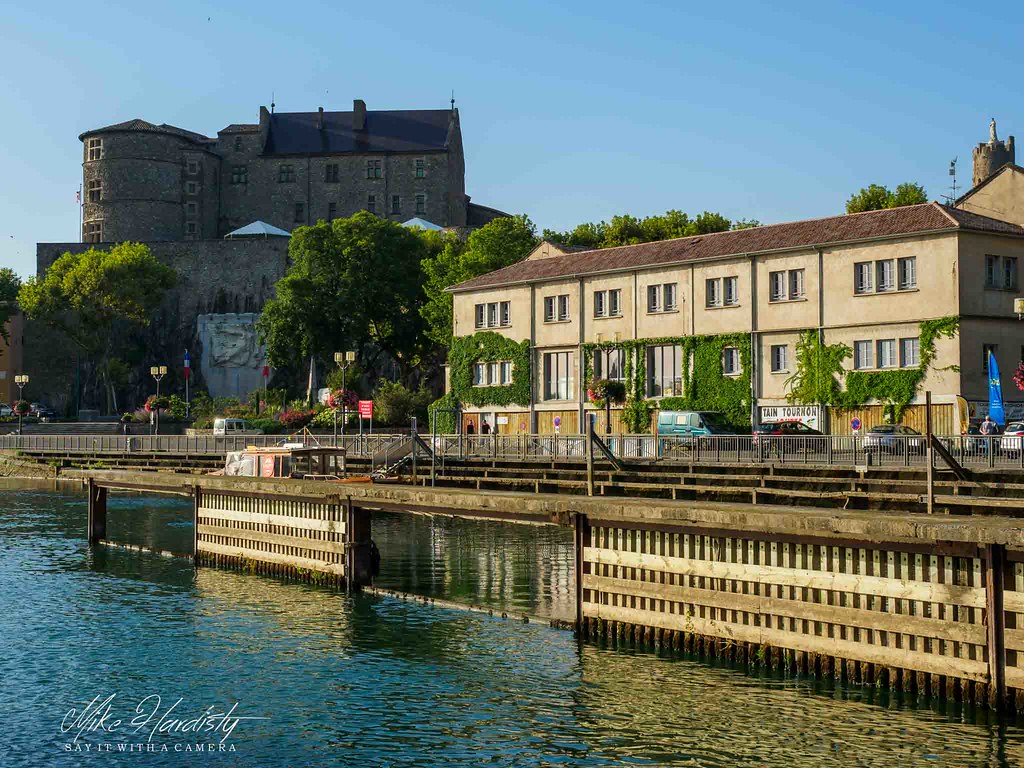 Anyway moving on. Wandering around the market by the riverside it was already starting to get busy, but there certainly wasn’t a 1000 traders in the market space. No! There had to be more elsewhere? Round towels, can’t say I’ve seen them before. 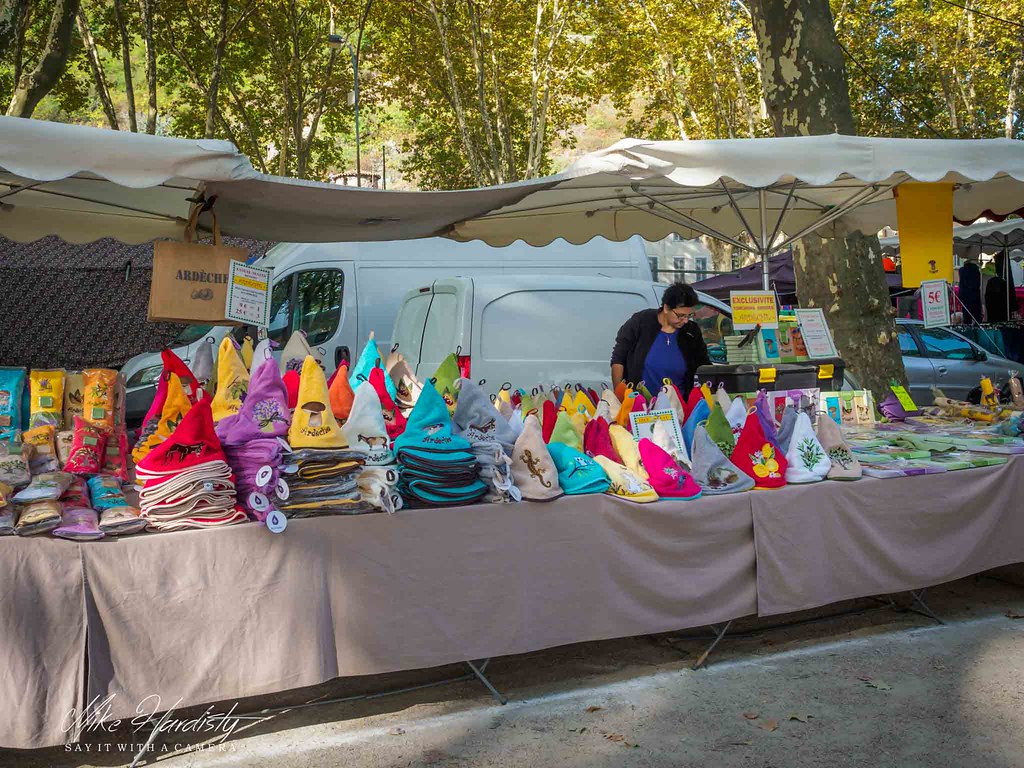 Ugh! Nutella. I don’t know what tastes worse, Vegemite or Nutella. The idea behind this stall is you buy the pastries (donuts, maybe) and they get filled with your choice of filling.  But I actually saw someone buying the pastries and then getting them warmed before eating them. So a little bit of research courtesy of Wikipedia and I find that a Beignet is the French term for a pastry made from deep-fried choux pastry and they are meant to be prepared and eaten right there and then. 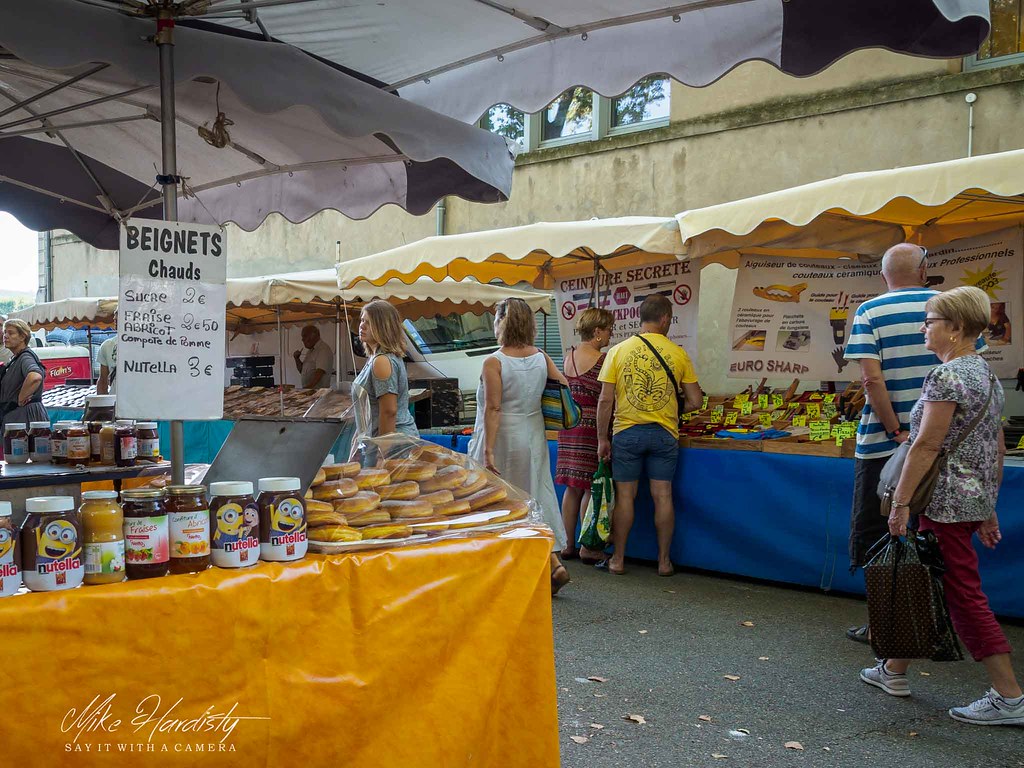 It’s chocolate time and I’ve never seen this before. You buy the yellow carrier bag for 10 Euros (about USD $12) and then this market man goes around filling it with chocolate. There’s lots of talk and gesticulating and he was just starting to get in his stride when I came along. But just remember this. It was a hot day, later we were told the temperature had reached 40 degrees centigrade. I wonder how the chocolate survived. 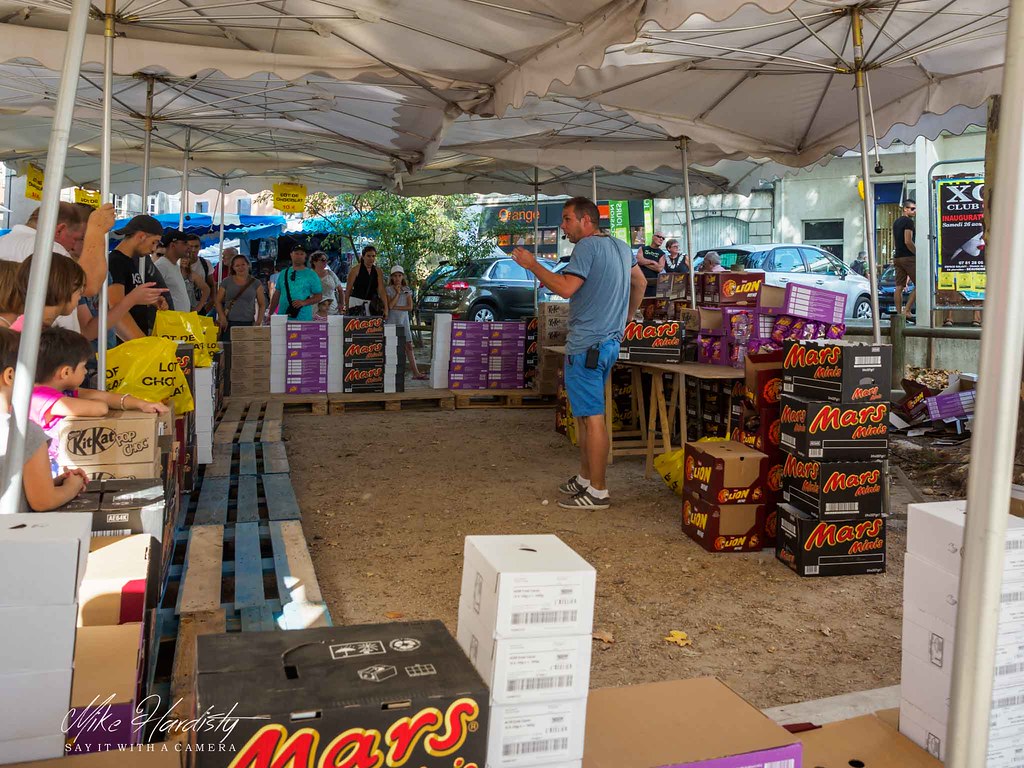 Another one from the market before I set off to have a wander around the town. Apparently all local made. 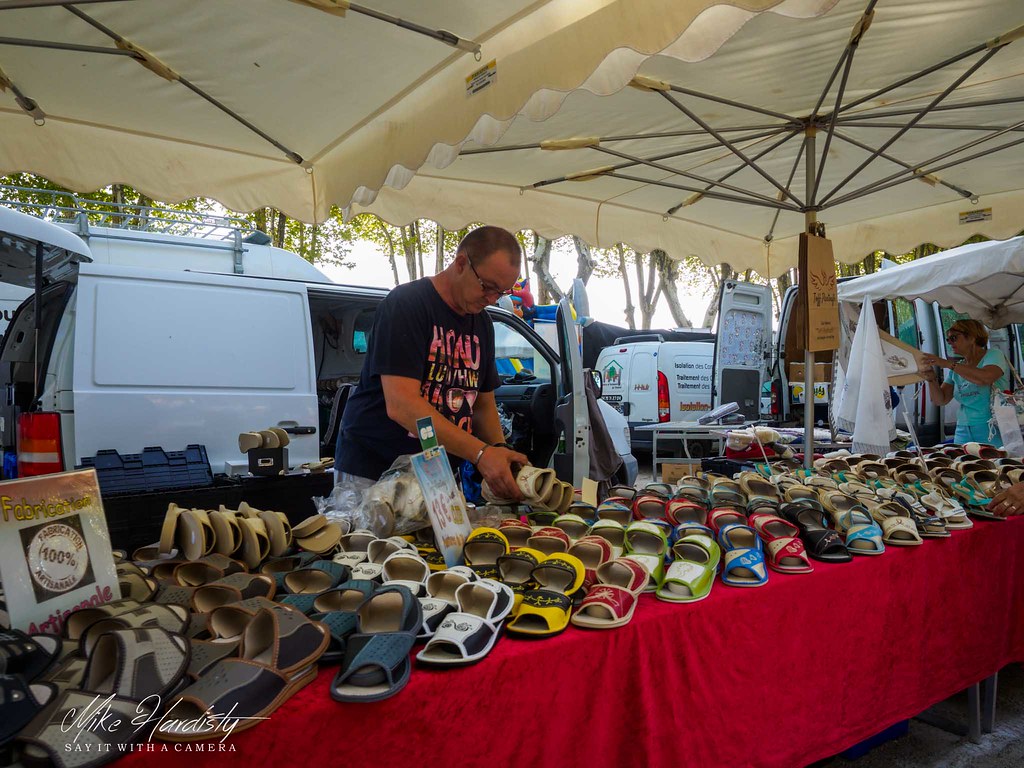 Getting away from the river I started to wind my way through the narrow streets looking for photo opportunities. Now I know where all those traders are. They’re in the streets of the town and of course so are all the townsfolk and tourists. It’s hot, sticky, there’s a lot of bumping going on and I have already worked out I’m going to be photographing crowd scenes. 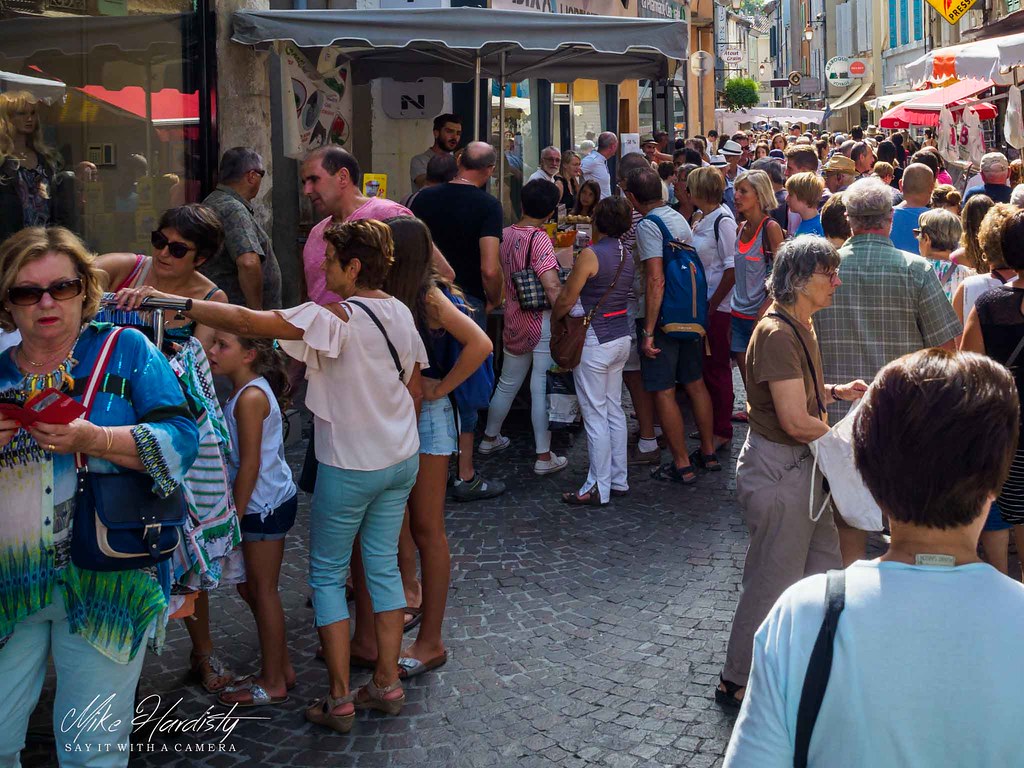 That is until a find this narrow little street with no one in it. At last a bit of peace and quiet and I can take some photographs without people. Look at this, dark, narrow, winding and surprisingly cool, considering. Look at those pipes coming down the side of the buildings. Perfect. 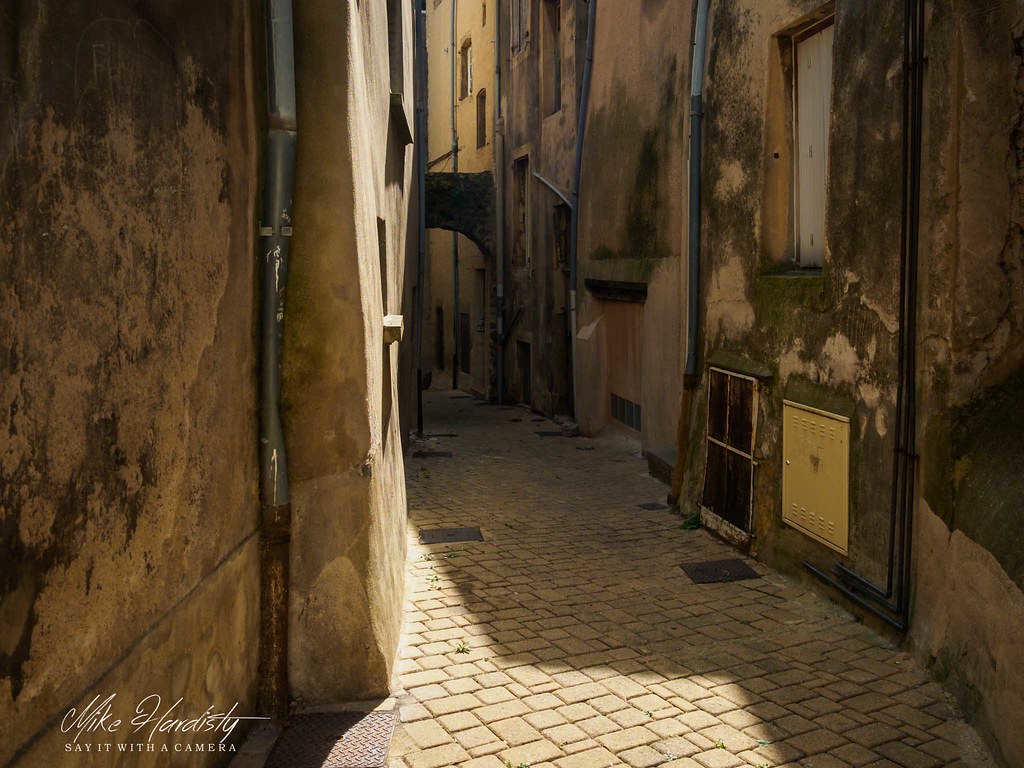 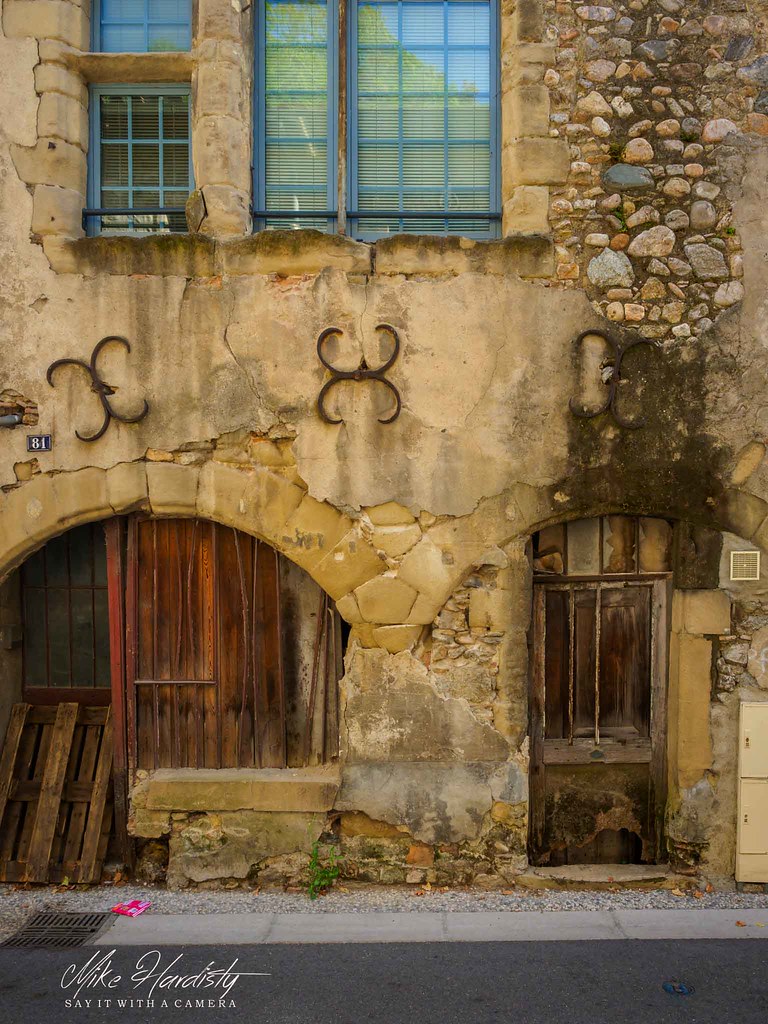 The church was so cool and peaceful. It wasn’t my intention to take a photograph but I wanted to linger a while and just chill, excuse the pun. I’d had enough of crowds and the church was almost empty. 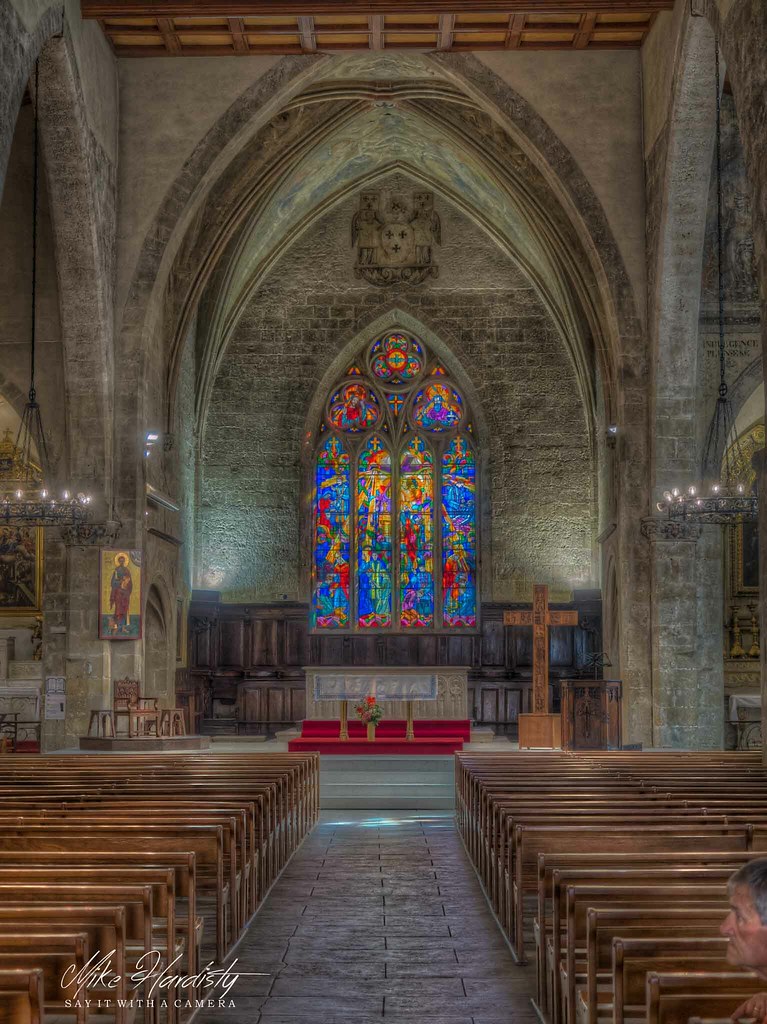 But I couldn’t stay there all day. I had a hot date with a castle later in the afternoon so it was time to get back to the river, grab some lunch and cool off in my air-conditioned room before venturing forth again.

And there he is. “Onion Johnny”. Surprisingly although it’s the Onion Festival I saw very few onions for sale. But there again I wasn’t exactly going looking for them it was just too hot. 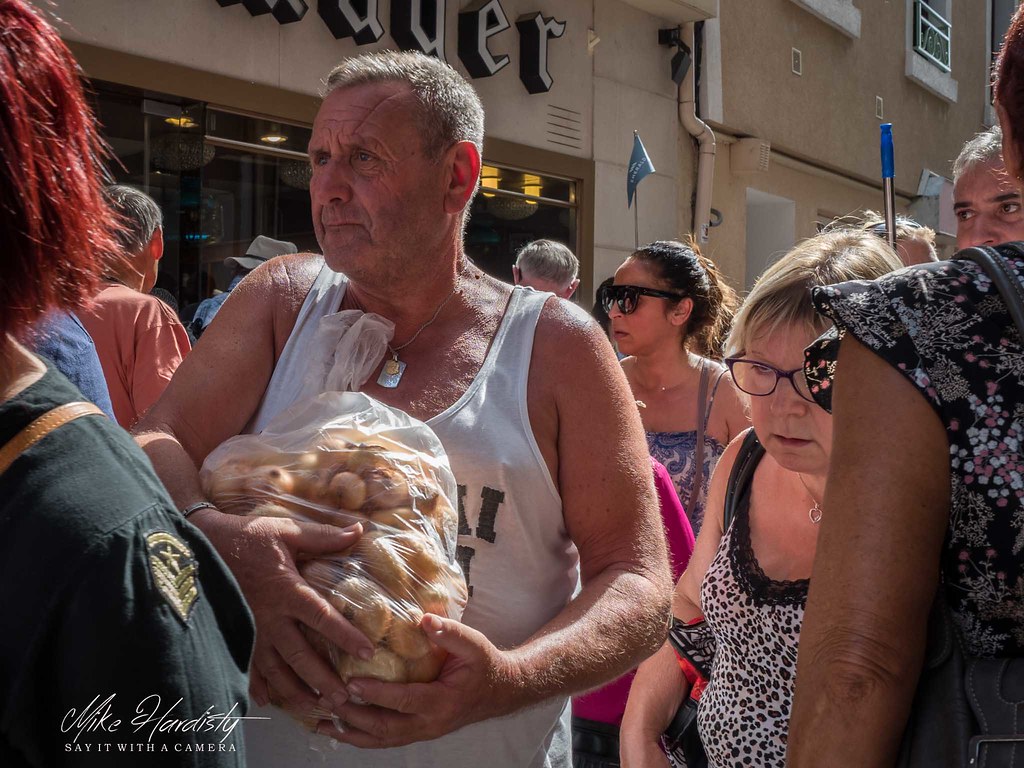 That’s it. Later this week I’ll take you on a trip around Tournon Castle.