During the time we were in Budapest we experienced some really dramatic weather. High winds, torrential rain, bitter cold days. But you still have to get out if you want to see the sights, These photographs were shot over several days and you can see that in the skies.

My plan with this set is to show you some architecture, both inside and out. Once again you can’t get away from tourists, hey I’m one myself, but in this set I decided in some cases to make use of them. So let’s get on with the photographs. This is the back-end of the Parliament Building in Budapest. It was the only place were there were very few tourists and it serves my purpose to show you the intricate work involved in the building’s architecture. 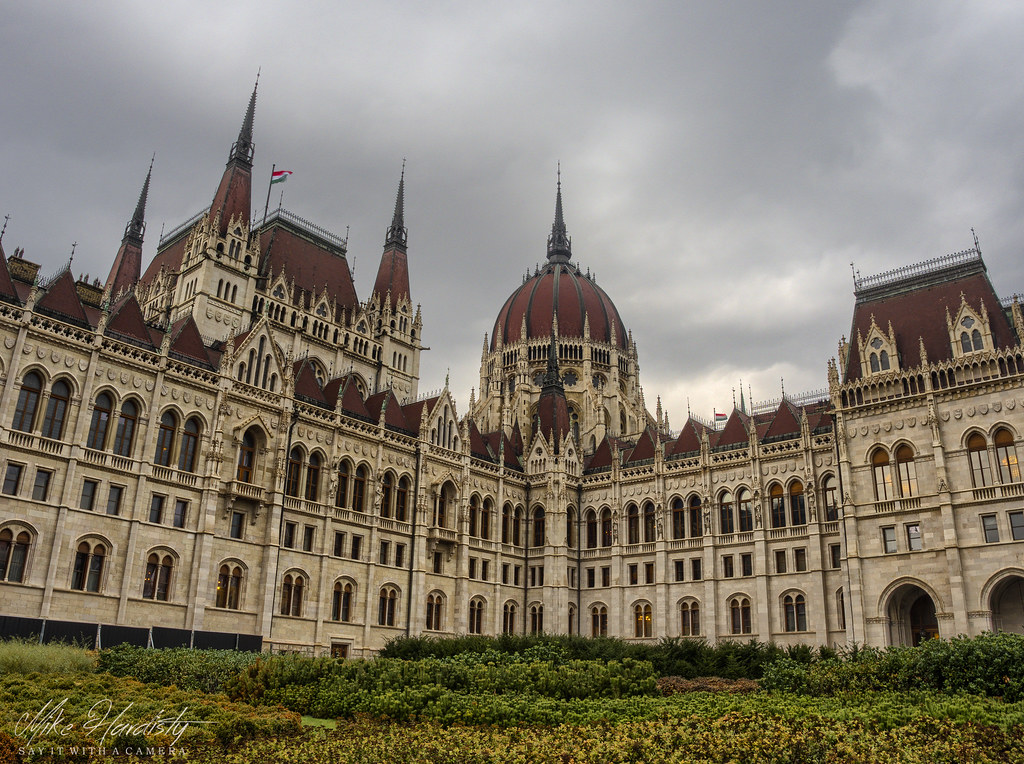 And the same building from the opposite side of the river 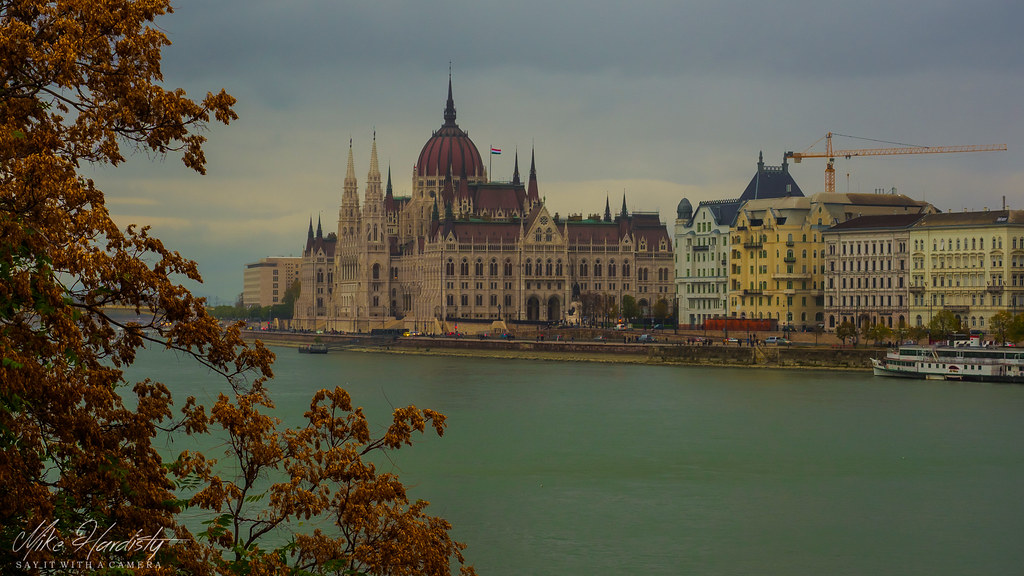 One of the places we visited, and we visited a lot in our 3 and a bit days in Budapest, is the Fisherman’s Bastion, high on the hill above the Buda side of the river. You can walk all round the bastion walls. But On the day I visited it was so busy. 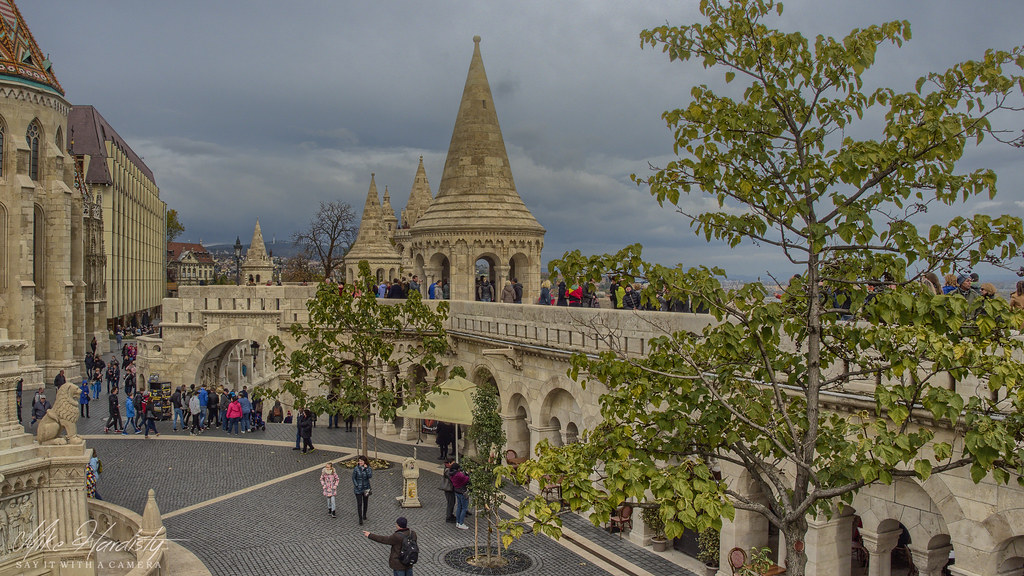 We caught the bus up to the Bastion but if you’re fit enough and fancy the walk then you can always climb the stairs up from the riverside. 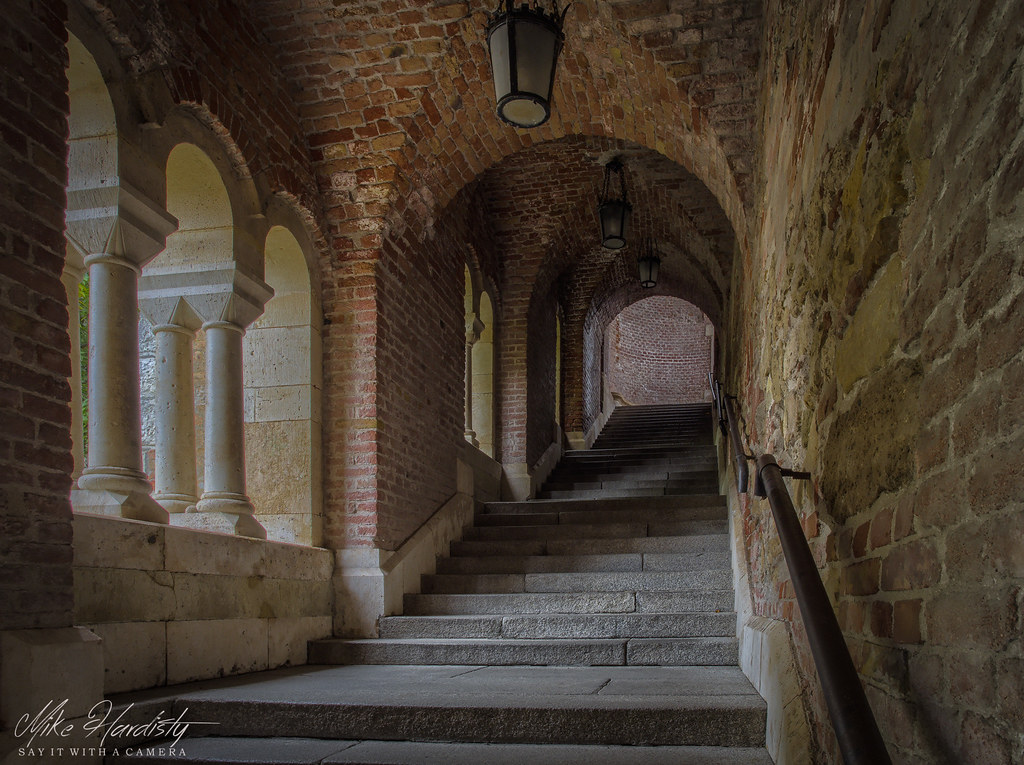 You know I said it was busy the day I visited. I had sort of got this photograph all lined up, minus the young lady. It was pretty obvious what I was doing, yet she decided that her need to be photographed by her friend far outweighed my needs. Couple of seconds and I would have been finished. But no, she just walked right into the frame and sat down. Pretty girl, so I decided to photograph her anyway and feature her in this post. I’d waited long enough to get the photograph so if she wanted to add that little bit extra, fair enough. Come to think about it, it does make the photograph, so thank you. 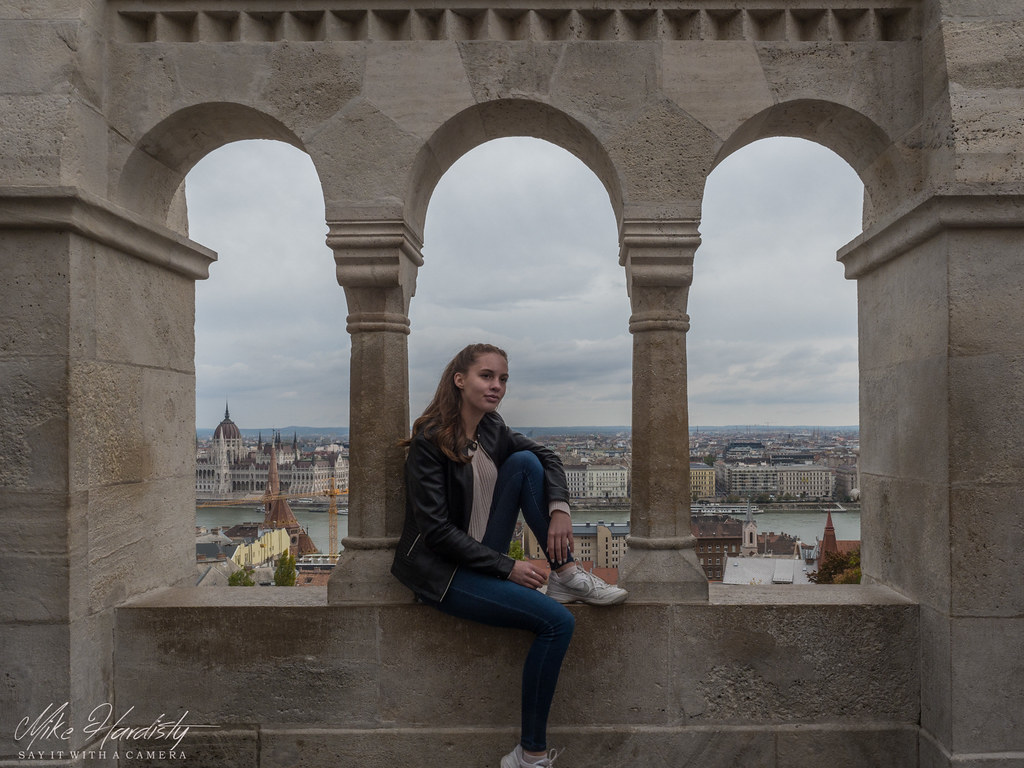 Up on the hill again. Looking over the River Danube to the Parliament building and the Pest side of the river. Budapest is one of the cities that gets regular visits from ships cruising the river. That’s one you can see now. Floating hotels that sail down the European rivers making stops along the way at interesting places. Don’t get me wrong here, I’m not complaining, I’ve been on two of these ships myself. The trip I did through France and one through Germany and the Netherlands. 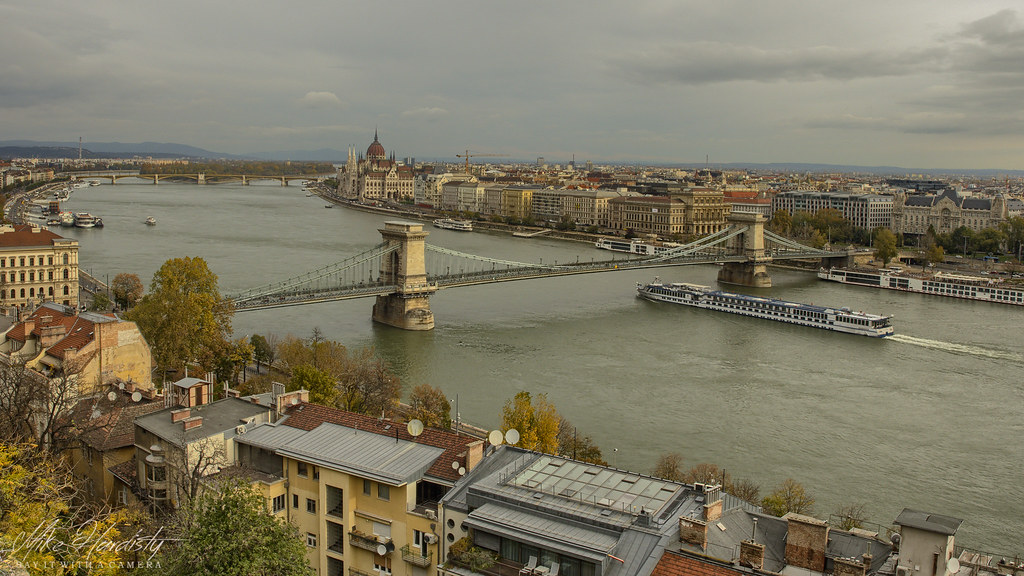 So let’s get down closer to that bridge. It’s one of many that cross the river in Budapest. In another post I will show you this bridge lit up at night. 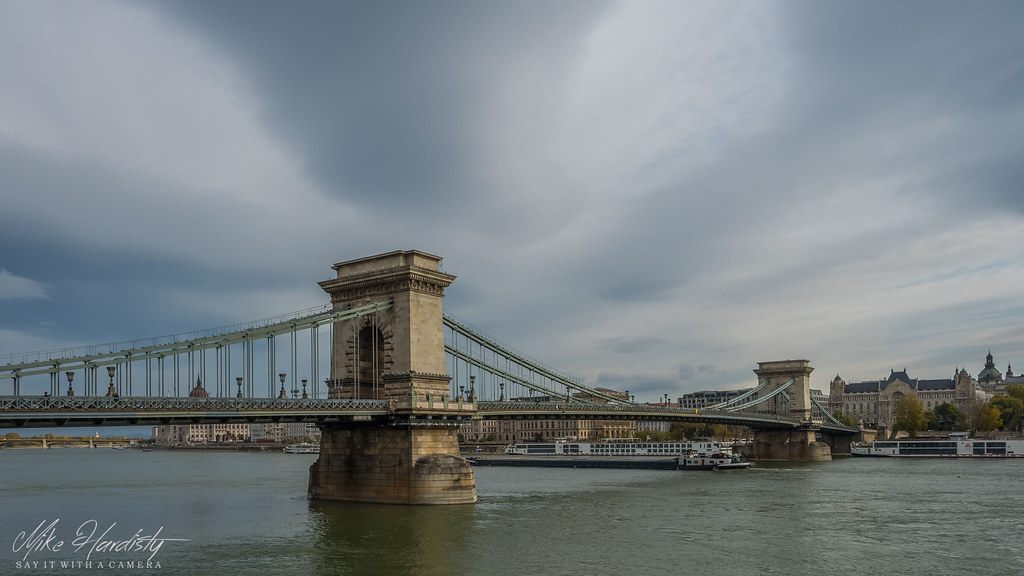 Whilst we were in Budapest we paid a visit to the Great Synagogue. It was a really grey and miserable day, fair bit of rain around so an indoor location was ideal. 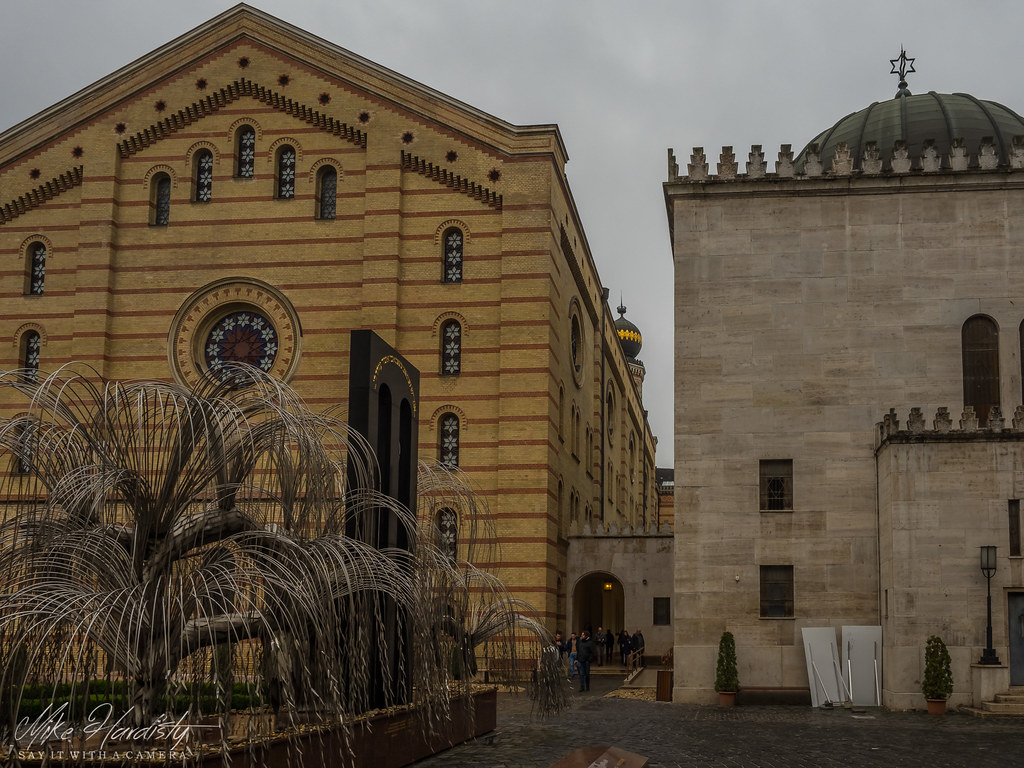 Outside the synagogue is not that exciting but step inside and you’re in a world of fantastic architecture. Tripods weren’t allowed, but here’s a hint. Find a pew, and if you can rest your camera on it. Use a wide aperture like f2, set your timer for two seconds delay to avoid shake when you press the shutter and hopefully you will be able to get a reasonable photograph without bumping up the ISO too much. 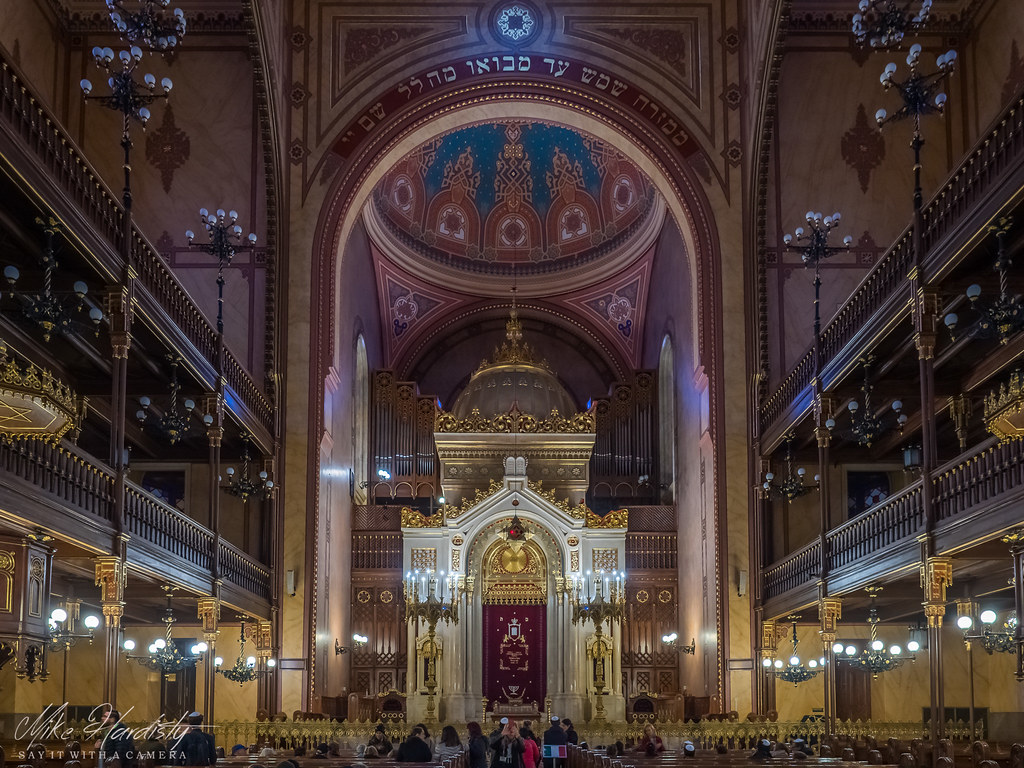 During the WW2 the Great Synagogue formed part of the Jewish Ghetto and it was used as a shelter for may of Budapest’s Jews. In the courtyard of the synagogue is a cemetery in which over two thousand people, who died from hunger and cold during the winter of 1944-45, are buried. 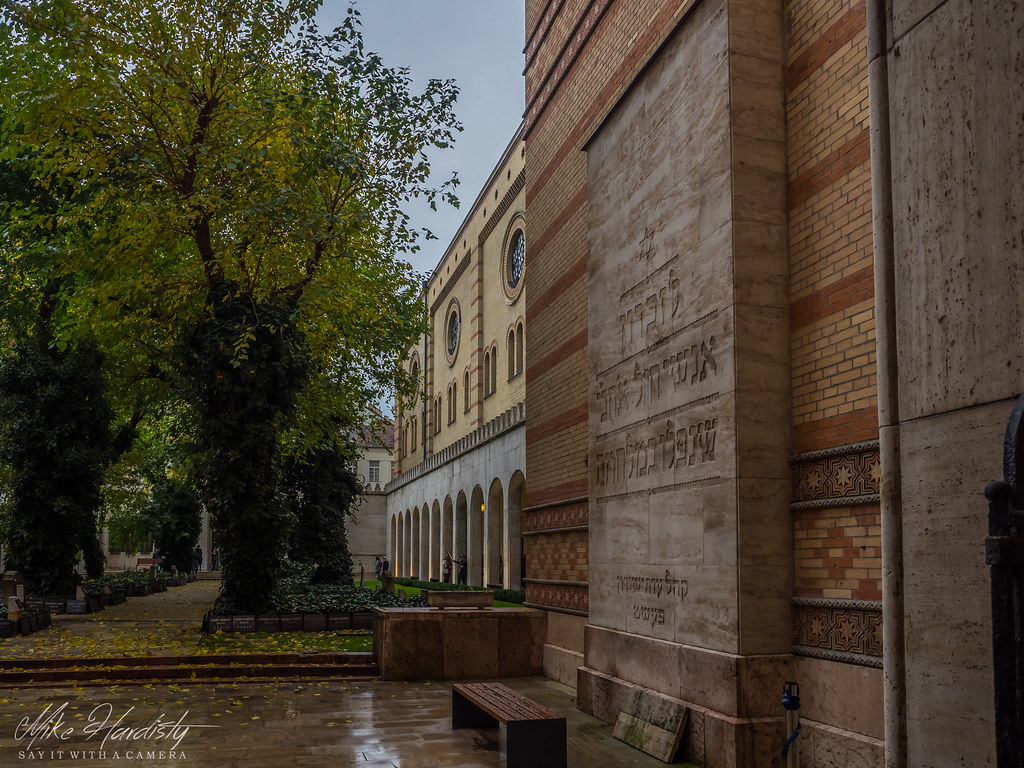 OK! Lets go underground. The transport system in Budapest is fantastic, trams, buses, underground all link seamlessly and it’s my favourite way of getting round. As an added bonus, if you are an EU citizen and 65 or over you can travel for free. Just make sure you have a valid identity document with you at all times as the inspectors are pretty keen. I used my passport whilst we were in Budapest. Although there seem to be no checks don’t be tempted to not buy a ticket if you are under 65. The inspectors don’t wear a uniform, most are dressed very casually. First time you know they are there is when they put on a red armband and show you their identity card. No ticket, big fine. Not worth it.

Anyway the underground is pretty modern but some of the escalators are pretty steep and move really fast and they go deep, real deep underground. But on our travels we found this quaint underground line, where the stations look quaint and they’re just below ground. A few steps down and you’re on the platform. Even the trains are old and rickety. 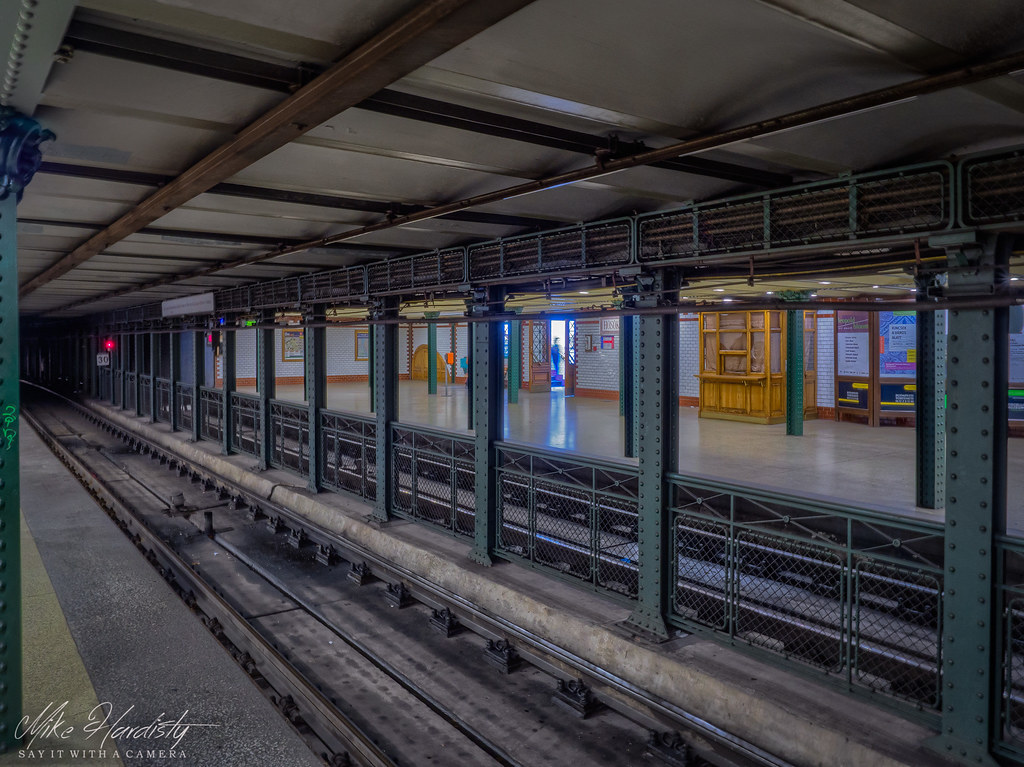 ….and this is where we ended up. At Heroes Square.. As usual you aren’t going to get a photograph without tourists so when these lovely ladies lined up for a photograph it was too good an opportunity to miss. So with a smile and pointing to my camera they nodded Ok and I took some photographs of them. The gentleman as totally unaware that I was there, that’s why they are laughing. 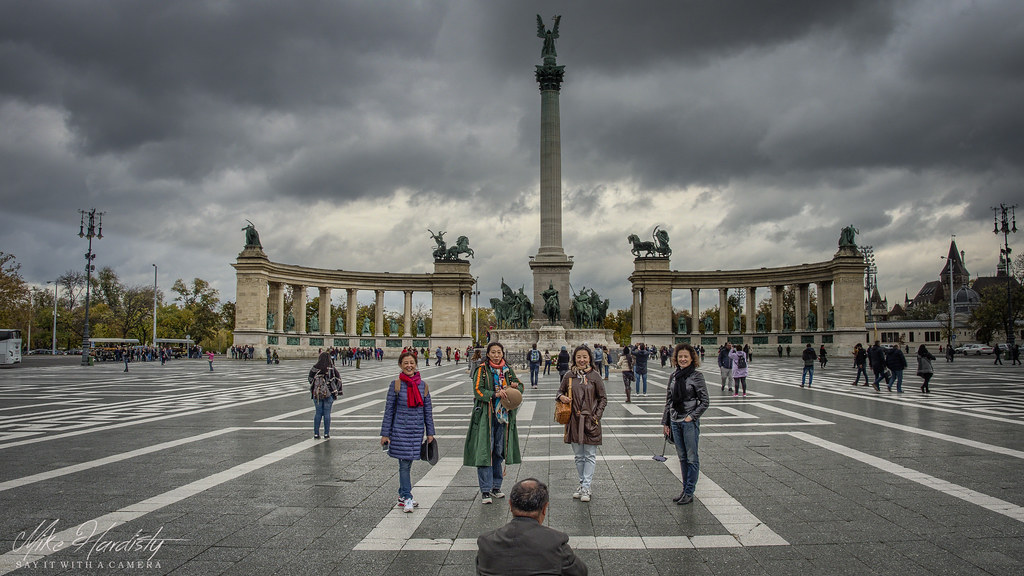 Across from Heroes Square is Vajdahunyad Castle, which is now a museum. That concrete area in front of it becomes an ice skating park in Winter. 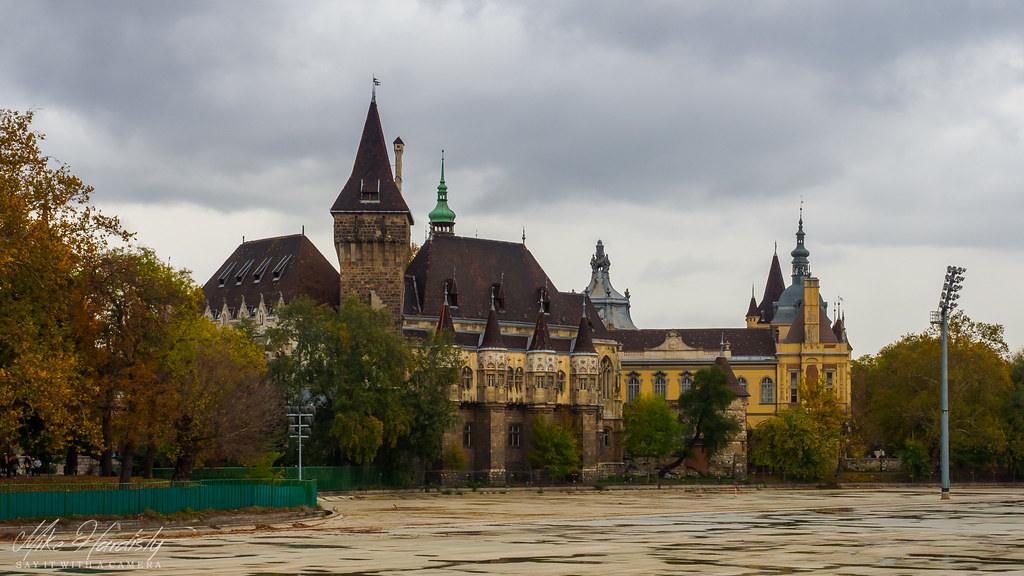 As you wander around Budapest you find many little hidden courtyards behind the facades of the big buildings. This one leads to a hotel. I love finding them and having a look, just to see what is there. 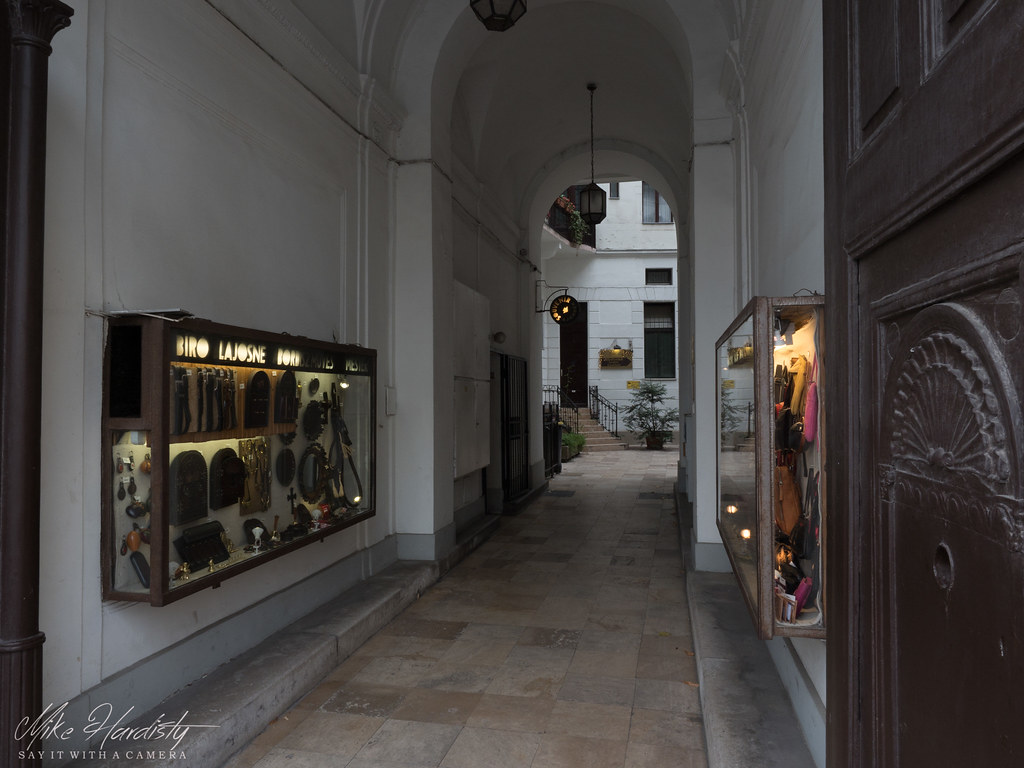 Very often the doors are closed and then as you are walking around someone will open the door to come out. I’ve seen beautiful garden courtyards, stark concrete ones and even hidden shops. 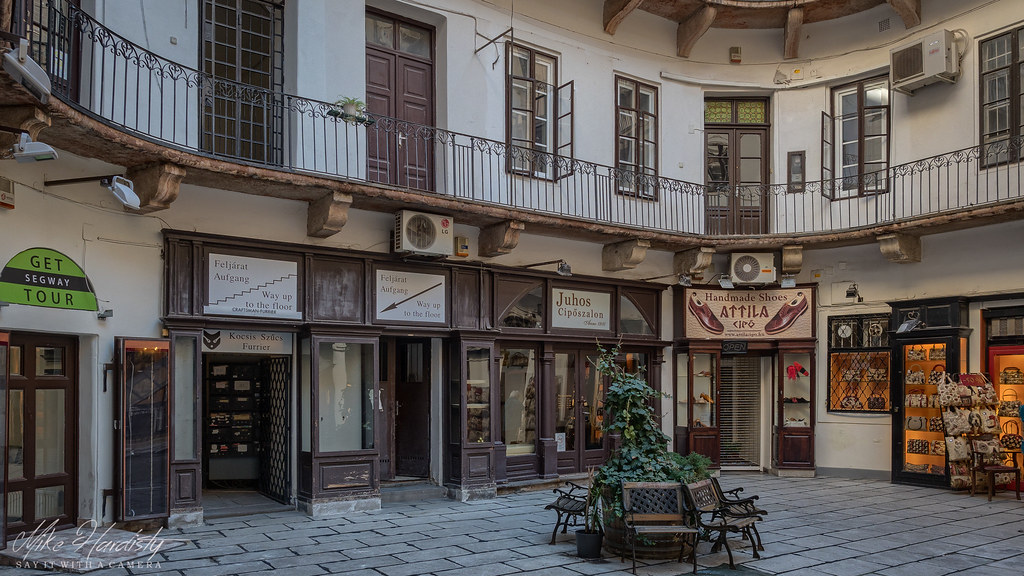 Well that’s it. I enjoyed my visit to Budapest, despite the weather and the inability to capture photographs without tourists. It’s one of those things about travel nowadays, everyone does it and unless you are prepared to get up at dark o’clock you are not going to find any popular location without people. On this trip I decide in the end to embrace people, not literally, and use them with my photographs.

So I’ll leave you with this photograph taken at Fisherman’s Bastion. The young lady was standing there looking out over the city. I quickly changed to spot metering and exposed for the sky which more or less pushed her to be in silhouette. I quick touch up in Lightroom to complete the darkening down and there you have it. 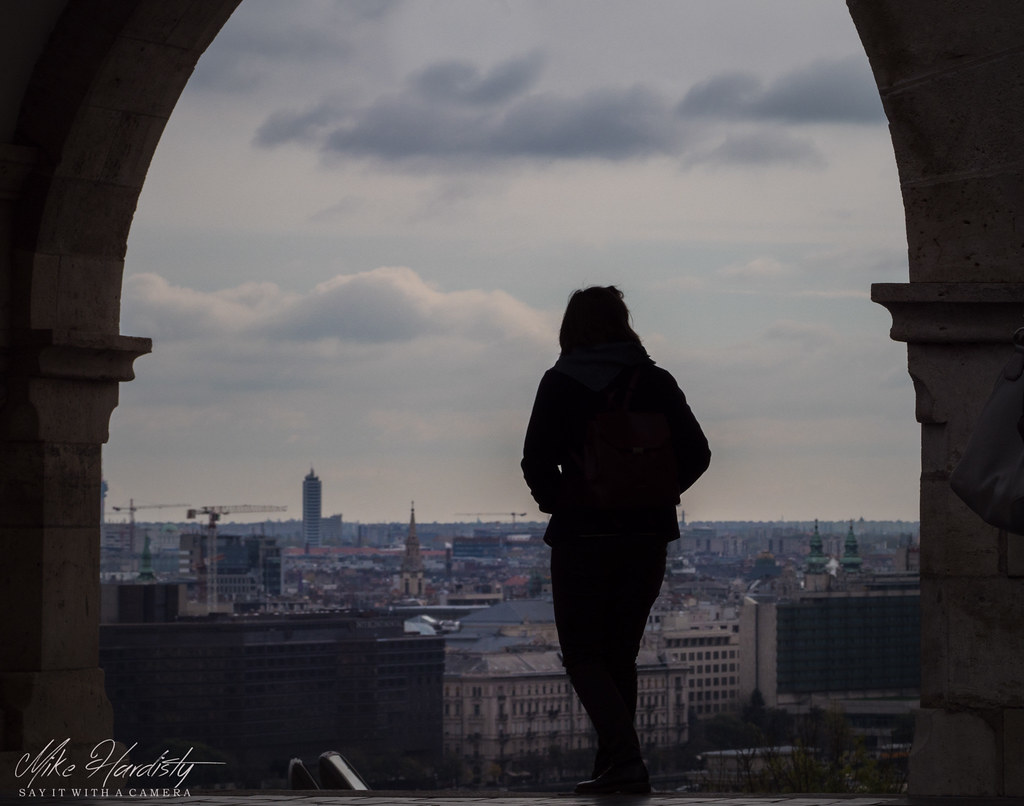 It’s unlikely that I will visit Budapest again, which is why I was so determined to get out and about no matter what the weather. We walked miles, got drenched by a heavy downpour at one point, not much you can do when you are stuck on an exposed bridge halfway across the river. Travelled extensively on the public transport system and I took over 1000 photographs in the 4 days that we were there. Admittedly I was in tourist mode and knowing that I most probably wouldn’t be back I was determined to record as much as possible. Quantity over quality, probably, but it’s a one time shot. Better to have something to work with than nothing at all. At least that’s the way I see it. How about you?

Does this post meet the weekly challenge, probably not, but there again it’s all down to interpretation……..