I don’t know if it’s because we are an island nation but we British do love the water. Get a nice hot sunny day and people will go for a paddle at the beach. The really brave will go swimming, even if the water is cold. Watersports abound. I have lost count of the number of people I have seen using the rushing white waters of our Snowdonia Rivers. Not so far from me is a Surf Centre. An artificial lake with a giant wave machine were people can go surfing. We like our water.

Just last weekend the Royal National Lifeboat Association (RNLI) held a charity event in Rhyl Harbour. Build your own raft and race it against others around the harbour. And for added fun do it against an incoming tide which rushes into the harbour at Rhyl. 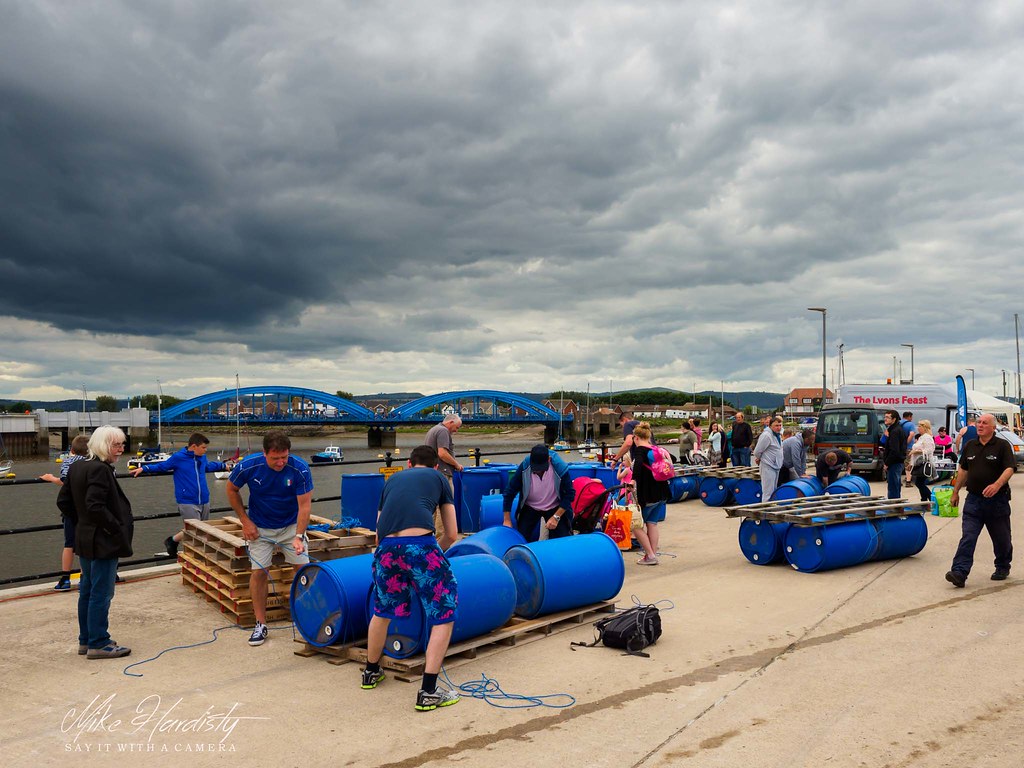 With dark, ominous clouds some of the contestants get started in building their rafts. Nothing fancy here, Some barrels, tie pallets to them and you’ve got yourself a raft. Not the most stable of platforms.

Meanwhile, the RNLB Lil Cunningham enters Rhyl Harbour and will tie up against the jetty. 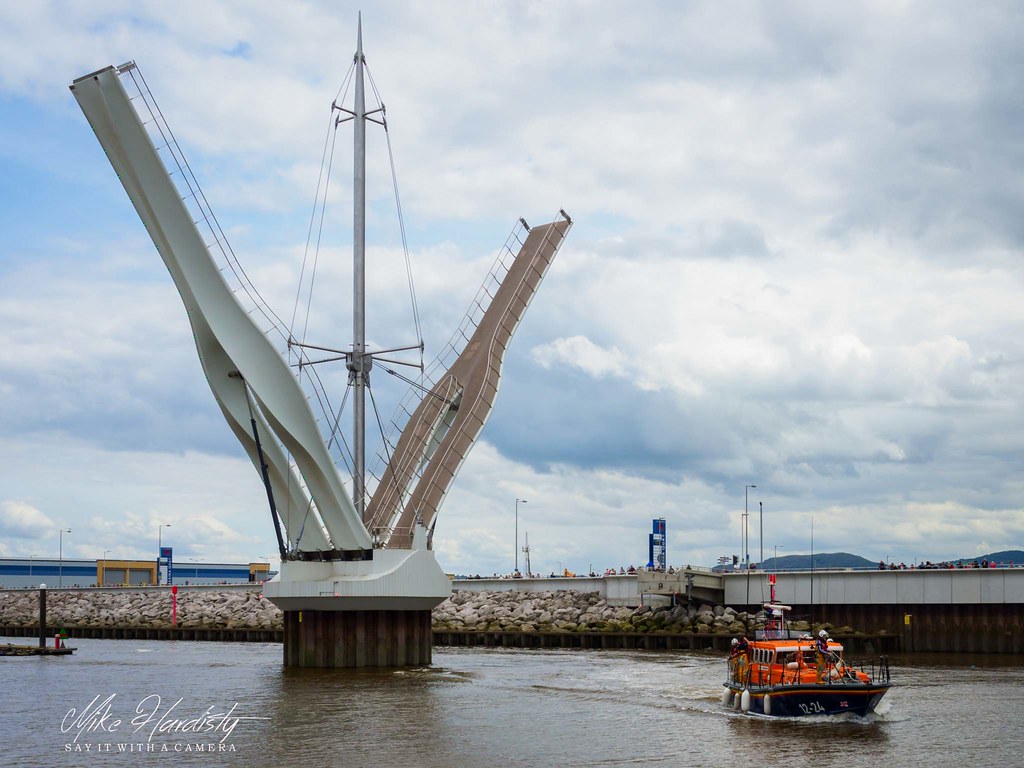 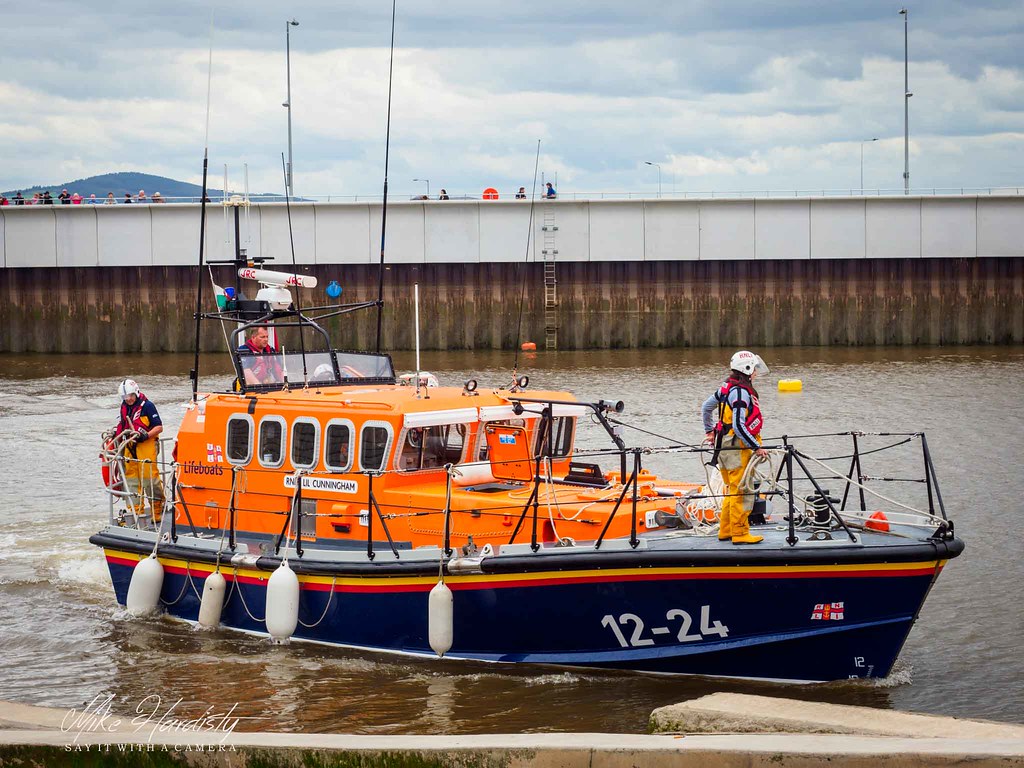 Whilst we were waiting for the races to start a water version of Gladiators was fought in the harbour. 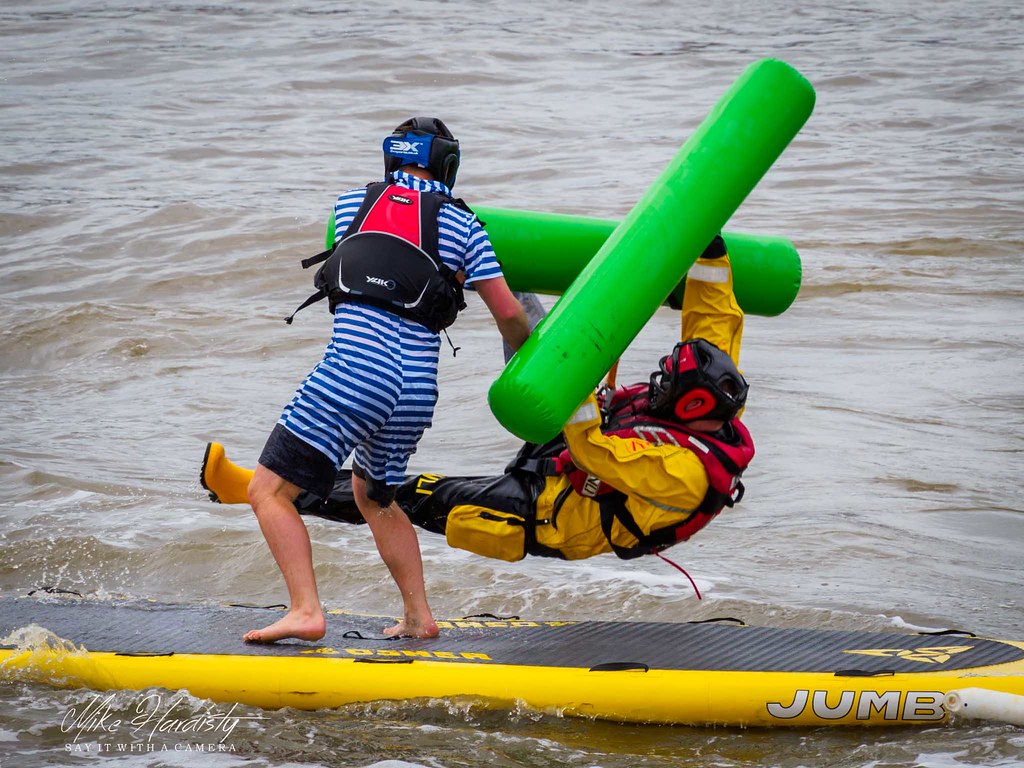 Soon it was time for the first race to start. Launch from the slipway, paddle to the bridge, go around the bridge support and then paddle back to the slipway. I was standing on the slipway when I took the photograph of RNLB Lil Cunningham entering the harbour. It doesn’t look far to paddle there and back but against an incoming tide it was going to be hard work getting to the bridge. 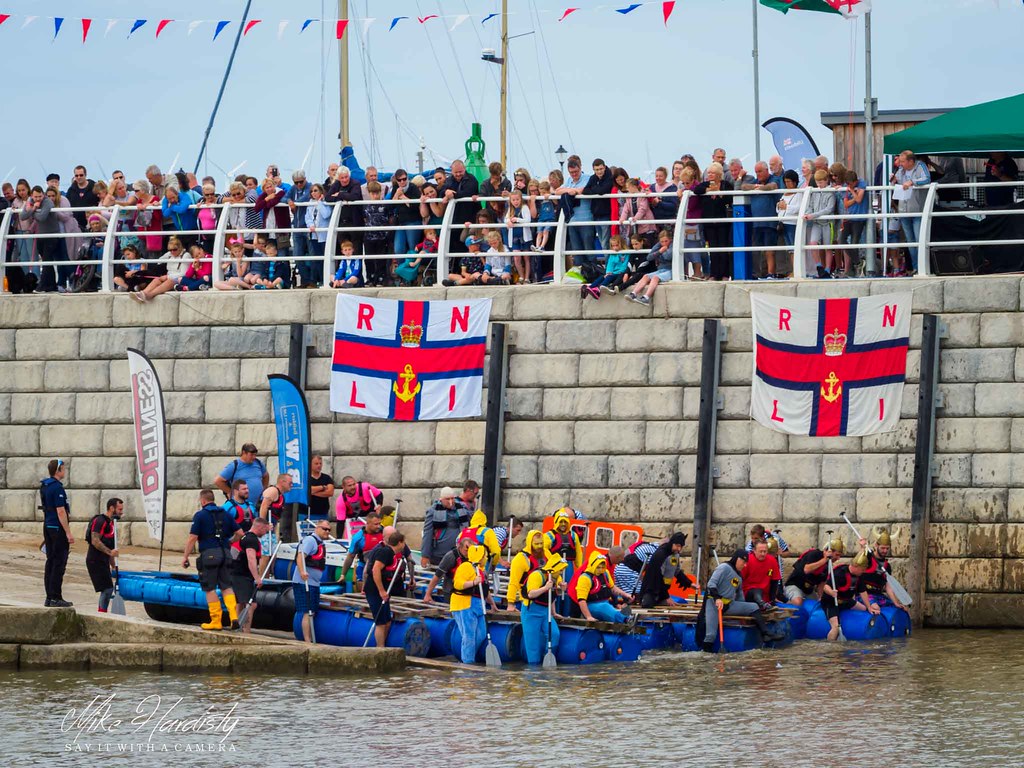 The crowds were really out in force by now, lining the harbour wall, both sides, standing on the bridge as well.. And soon they were off, at this point organised chaos comes to mind. 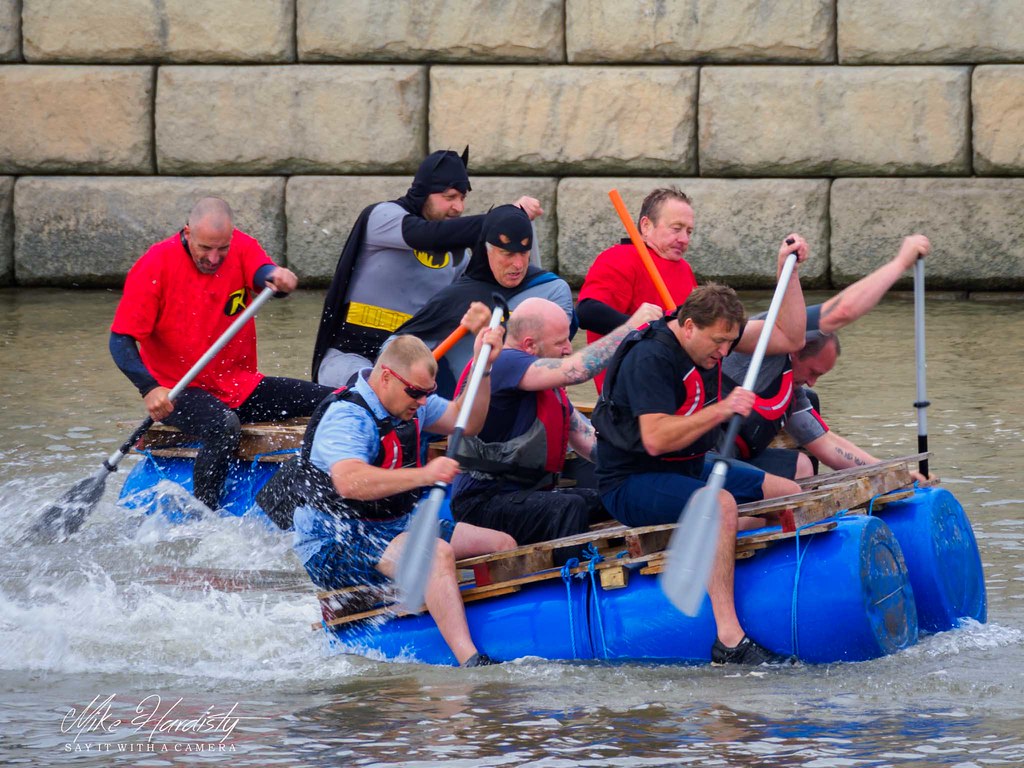 But it soon settled down and this is where “the ringers” came to the fore. Remember I said right at the beginning, turn up, build your raft and  how unsteady they looked. Seems like some built their rafts in secret. This is a craft of beauty. It looked very stable in the water and they seemed to be powering along. Of course once they get around the bridge you’ve got the advantage of going with the current as the tide comes in. 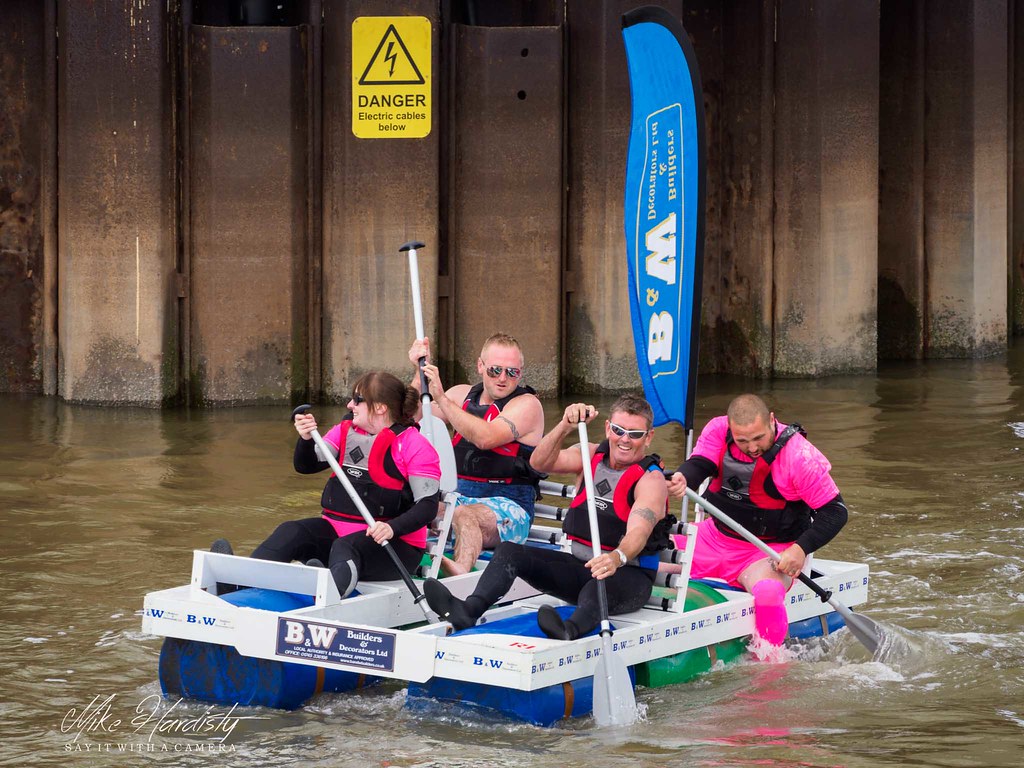 Another one. I think this was the RNLI’s entry. 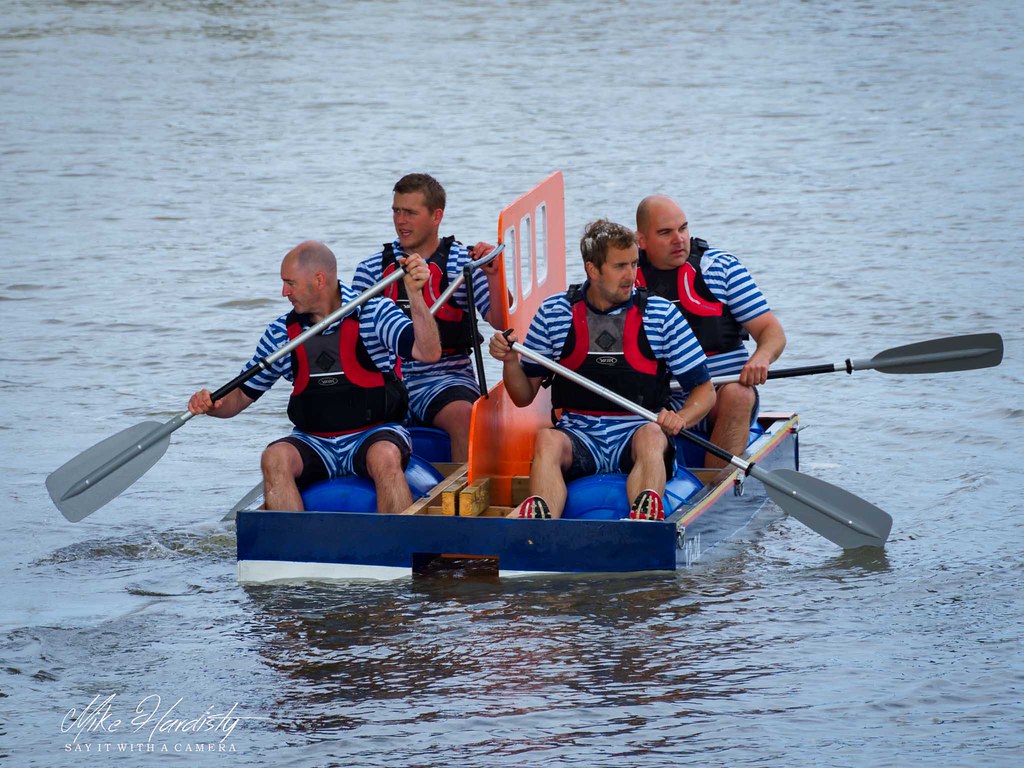 For safety’s sake the RNLI inshore craft were on hand to help any team that got in difficulties. 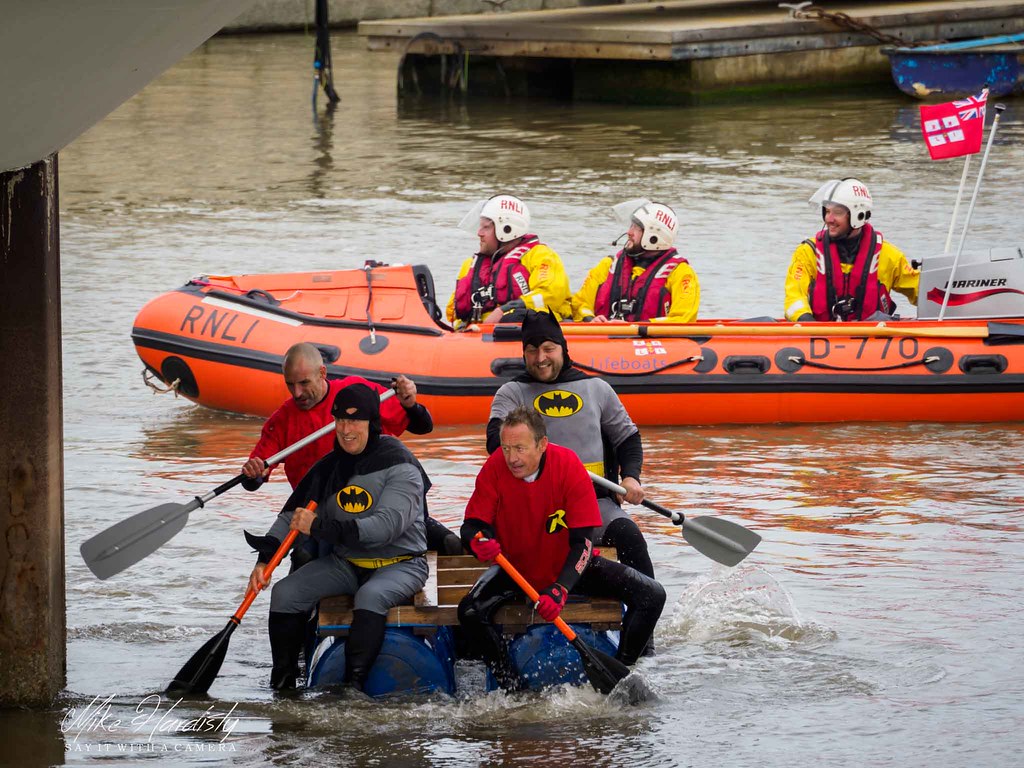 Meanwhile RNLB Lil Cunningham had moved out into the centre of the harbour and to help the crews along and add to the fun. They were using the hose to provide a little water borne encouragement to the contestants. 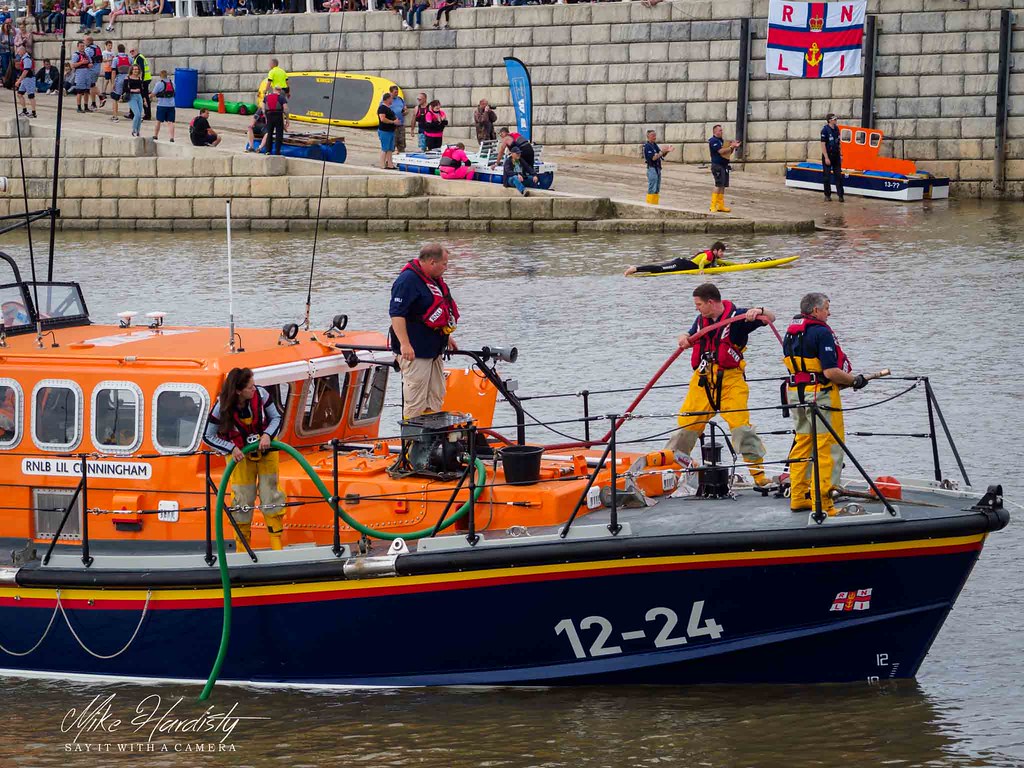 Well that’s it for this week. As you can see my element was water, here’s a few bloggers, who have written about  this weeks challenge and I have liked.

11 thoughts on “They Are Going To Get Wet”