Without a doubt I have admiration for one of the great landscape photographers, Ansel Easton Adams (February 20, 1902 – April 22, 1984), an American photographer and environmentalist. His black-and-white landscape photographs of the American West, especially Yosemite National Park have inspired me to take photographs of the Snowdonia National Park, here in Wales. I mean take this photograph below that Adams took of the Tetons and Snake River in 1942. The range between Black and White is amazing and something I can only hope to emulate

Adams was a master of his art and with Fred Archer, Adams developed the Zone System as a way to determine proper exposure and adjust the contrast of the final print. Remember these guys worked in the darkroom and didn’t have modern digital cameras. But Adams was also forward thinking as we can see from this quote he made in 1983

I am sure the next step will be the electronic image, and I hope I shall live to see it. I trust that the creative eye will continue to function, whatever technological innovations may develop. – Ansel Adams

Although Kodak had developed a form of digital camera in 1975 it wasn’t until 1988 that Fuji unveiled the first truly digital camera that could be used by consumers. Unfortunately it never went into production but more importantly, in conjunction with Toshiba, a removable memory card to be used in the camera was also showcased.

Over the next few years various models of digital camera came out but they were extremely expensive and way beyond normal consumer use. Then in 1995 came the Casio QV-10, the first digital camera with a 1.8-inch color LCD that could play back images and function as a viewfinder. And the price? Considered to be a bargain at $750 the Casio produced photographs at 320 x 240. My modern digital camera give me resolution of 4608 x 3456. Interestingly the Casio did not have a removable memory card, instead the photographs were saved to internal memory and to get them off of the camera you had to connect a cable to the RS232 port of your computer. Don’t know what the RS232 port is? Way, way back the RS232 port was once a standard feature of all personal computers. It was used to connect peripheral devices like modems, printers and even your mouse.

Enough of the history lesson….on to the photographs and inspired by Ansell Adams they are all black and white landscapes. 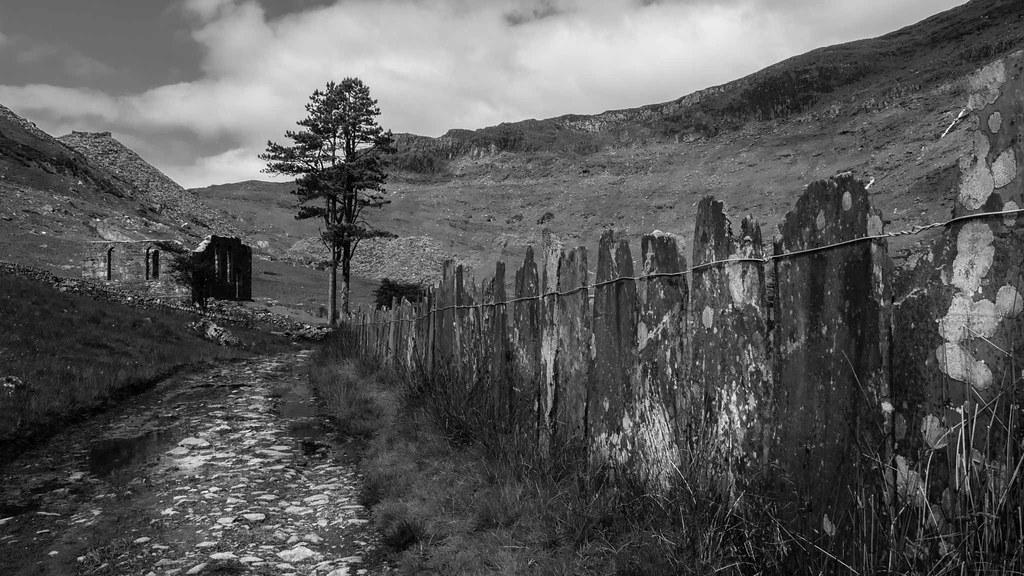 Cwmorthin is a secluded valley I have visited several times now. Once the site of a thriving industrial slate quarry and mine it now has an air of peacefulness and tranquillity. No one lives in the valley and the only visitors are cavers and walkers. Oh and the sheep. I’ve been the only person in the valley and to hear the sheep calling can be quite eerie.

Tryfan in the Ogwen Valley has a distinctive shape and quite often when the sun is shining through the clouds patches of light and dark can be seen. 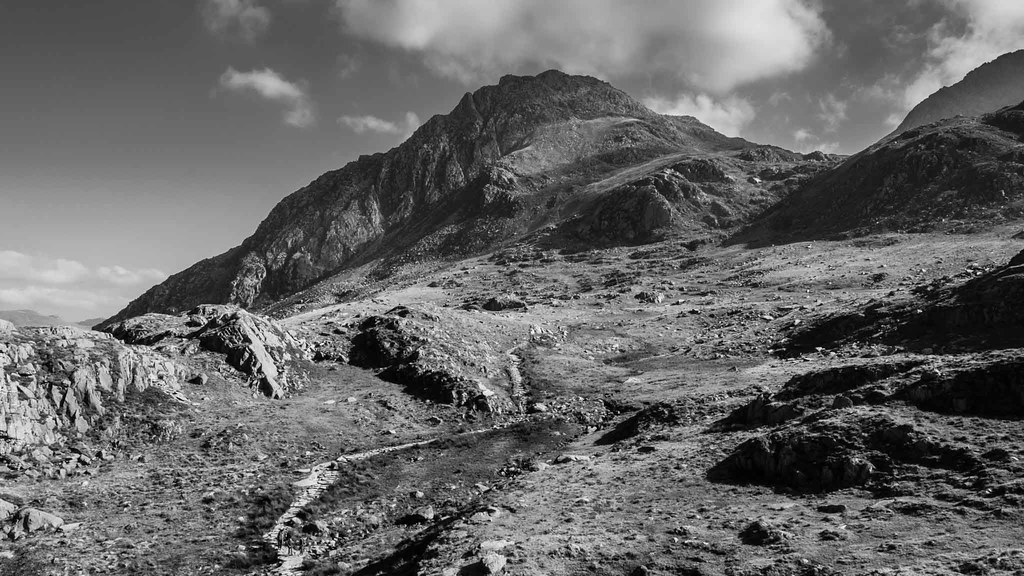 What do you think about showing these in Black and White?

Now to my next photograph, Pen Yr Ole Wen. It’s one of those mountains that looks impossible to walk up and yet I’ve seen people doing it. Probably following well-worn sheep trails. Too much like hard work for me. I prefer the easier trails. 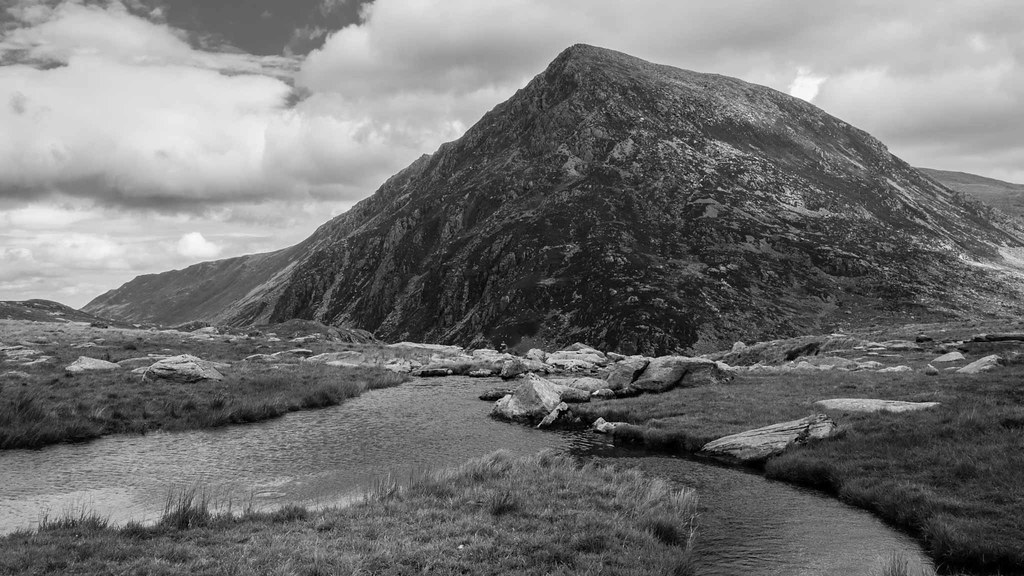 My old favourite Talacre lighthouse looks so different in Black and White. I think I prefer colour for this…but there again. 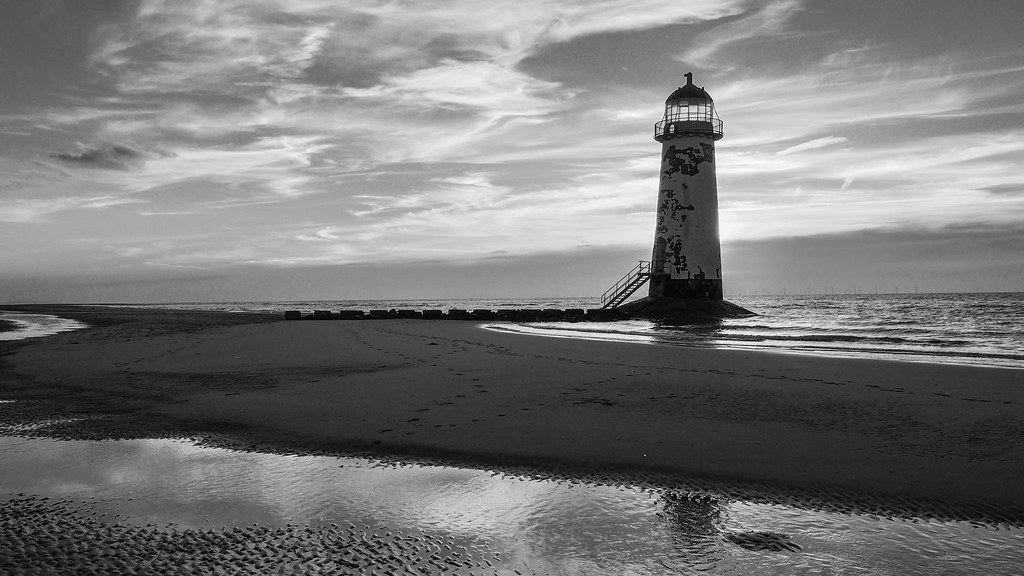 Another view of Pen-Yr Ole Wen, this time from further around Cwm Idwal. You can follow that path all the way round the valley and lake before getting back to the descent to the Ogwen Valley and Llyn Ogwen 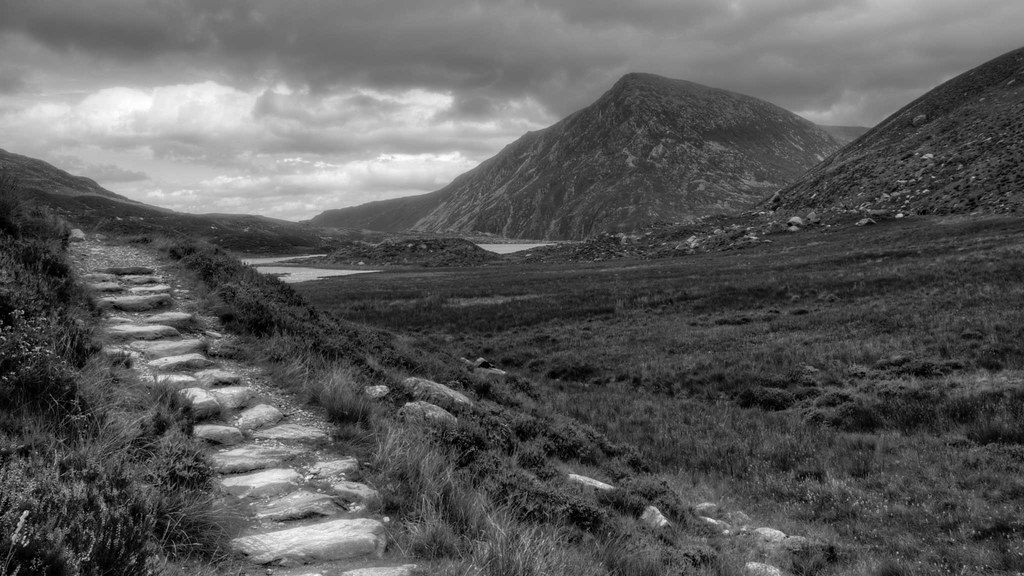 Well that’s it for this weeks challenge, as usual here’s what other bloggers are saying.